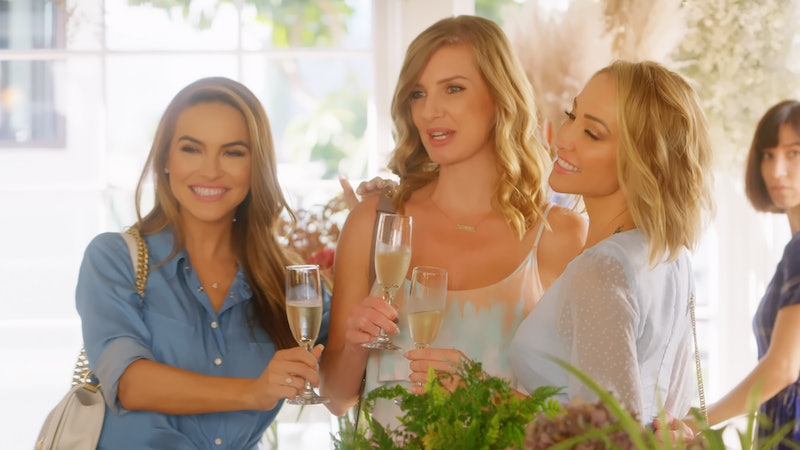 Fortunately for fans of Netflix's Selling Sunset, Season 2 was filmed last summer — long before COVID-19 forced other productions to shut down. We know this because it documents Heather Rae Young's relationship with her new beau, HGTV's Tarek El Moussa, which began over Fourth of July weekend in 2019.

"When I first started filming Season 2, we had just started dating," she told House Beautiful. "So you see the beginnings of our relationship unfold on camera, and me talk about him and my relationship with [his] children, and how they welcomed me."

By early August, the two had made their romance Instagram official. "This incredible man @therealtarekelmoussa came into my life at the perfect time and I haven't stopped smiling since," Heather wrote in an Aug. 8 post. Selling Sunset was renewed in April of that year, so preproduction was most likely in May and June, with filming beginning around August.

Mary and Romain's relationship also deepens in Season 2, and it's likely fans will see them walk down the aisle after getting engaged in Season 1. Mary posted on Sept. 18 that she was shopping for wedding dresses, and on Sep. 26, Chrishell posted about a bachelorette party for Mary. Mary teased in a May 2 post that they may or may not be married by now, but one can reasonably guess that they tied the knot some time in the fall, in order to show the ceremony in Season 2. (The Season 2 trailer also appears to show Mary at her wedding reception).

We also know filming probably wrapped up by 2020 in order to go into post-production. The cast, meanwhile, either took vacations or moved on to filming other shows. Tarek began filming Flipping 101 with Tarek El Moussa for HGTV in January 2020, and Heather later made an appearance. "Yesterday @therealtarekelmoussa and I filmed [for] the first time together for his new show Flipping 101 on HGTV," Heather wrote on Instagram. "We were both a little nervous but excited. And I must say our chemistry on camera is great!!!"

It's unclear when filming might begin if Selling Sunset is renewed for a third season. The Oppenheim Group still has several listings on its website, but film production companies have yet to reopen. (Also, how many people are looking to buy luxury homes right now?) Regardless, the cast are active on social media, so you can still check out what they're up to, even if it is just posting about Selling Sunset from the safety of their homes.

More like this
Everything To Know About 'Selling The OC' Season 2
By Brad Witter
Brittany Snow Files For Divorce From Tyler Stanaland After 'Selling The OC' Drama
By Grace Wehniainen and Radhika Menon
'Bling Empire: New York’ Star Tina Leung Has A Superhero Alter-Ego
By Alyssa Lapid
Who Is Dorothy Wang Dating After The 'Bling Empire: New York'?
By Karen Fratti
Get Even More From Bustle — Sign Up For The Newsletter
From hair trends to relationship advice, our daily newsletter has everything you need to sound like a person who’s on TikTok, even if you aren’t.