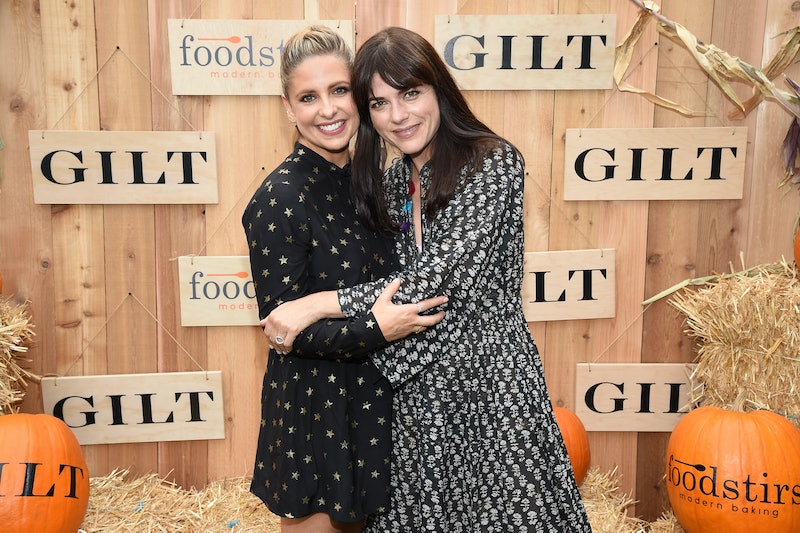 Cruel Intentions celebrated its 20th anniversary on March 5, 2019, but the enduring legacy of the film can actually be found in an off-screen friendship. In honor of the movie's milestone, two of its stars, Sarah Michelle Gellar and Selma Blair, opened up about filming the 1999 classic, and the timeless bond they formed because of it in a new interview with Entertainment Weekly. Blair and Gellar's friendship is the legacy of Cruel Intentions, and it has taken on a whole new meaning since Blair's multiple sclerosis diagnosis.

Blair announced her diagnosis in October 2018, and Gellar has offered her support to her former co-star. She even honored Blair's Vanity Fair Oscars afterparty red carpet appearance with a February 25 Instagram post. She wrote, in part, "To say I'm proud, would be a gross understatement. When I have a cold, I want to hide from the world under my covers. But not Selma. She is facing this diagnosis, the way she faces everything, with dignity, grace and head on."

Later that week, Blair followed up her inspiring red carpet strut, cane in hand, with a Good Morning America interview. She completed her sit-down with Robin Roberts during an MS flare-up and spoke out about her strength amidst her health challenges. Blair thanked Gellar for her support and showed gratitude for the movie that the two friends met on two decades ago. Blair captioned her Instagram post: "This girl. (Always my girl) is everything. She tucked me in and brought me dinner and loved me up. I woke with so much love for #sarahmichellegellar. Since the day I met her over 20 years ago, she fought for me along with @rogerkumble to be Cecile. She took me under her wing and today is no different. I am so in love with my angel of a friend. The best."

Blair and Gellar opened up recently in a joint phone interview with EW about the lasting impact of Cruel Intentions, which is returning to theaters for a special one-week run. EW noted that the two actors wanted to do the interview together so that Gellar could assist Blair if she struggled with her speech. In the interview, the pair reflected on winning the MTV Movie Award for Best Kiss after their Central Park lip lock scene, and Gellar even revealed that her character Kathryn's coke cross contained chamomile tea.

But the major takeaway that emerged from Blair and Gellar's comments was just how close they've remained since playing onscreen frenemies. "Sarah's in my life daily," Blair said to EW. "Helping me and being a friend always." Gellar responded, "Selma tries to get rid of me, but I have the keys to her house, so she's stuck with me."

Both actors emphasized the tight-knit relationships between several members of the cast, which they showed off by meeting up to see the Cruel Intentions musical in 2015. But in the aftermath of a film that even led to a marriage between co-stars Reese Witherspoon and Ryan Phillippe, Blair and Gellar's friendship may be the cult hit's lasting legacy.

Gellar told EW, "From the day I met Selma in that audition, it's like something clicked with us. Every big milestone in my life, whether it was my 21st birthday or Selma’s baby shower, I just can't imagine my life without her standing next to me. Nobody makes me laugh, and nobody knows how to put me in my place faster than Selma does." Blair responded: "Oh my gosh, Sarah's my everything. I can’t tell you how much I love this woman."

Fans of the film will surely feel '90s nostalgia for this female friendship. Out of a movie about scandal and deceit, a true bond between two amazing women emerged, and it continues to endure 20 years later.