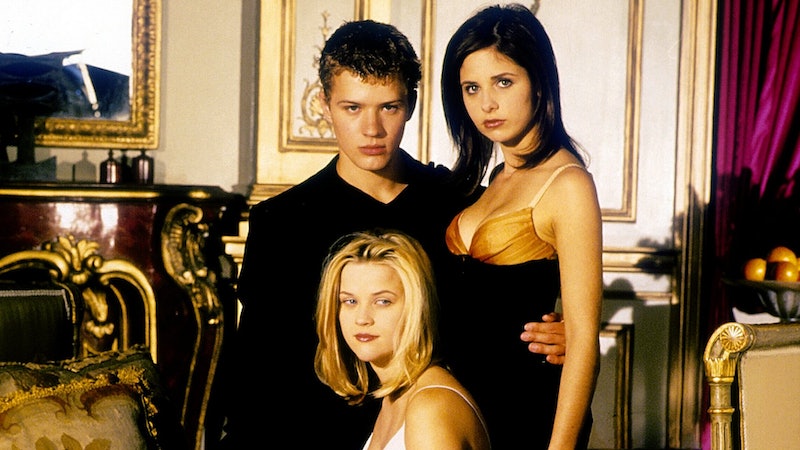 It's been two decades since a lust-filled love triangle and revenge conspiracy shook Manchester Prep to its core. Now, in honor of the film's 20th anniversary, Cruel Intentions is returning to theaters — but only for one week, according to Entertainment Weekly.

Beginning on Mar. 22, select theaters across the nation will be showing the 1999 teen cult classic, so get ready to re-join Kathryn's secret society. The movie will actually celebrate its 20th birthday on Tuesday, March 5, but lying about one's age never hurt anybody.

At the time of filming, Witherspoon and Phillippe were a real-life couple, which probably explains why their on-screen chemistry was oh-so-very electric. During an interview with Cosmopolitan in 2014, though, the movie's screenwriter and director, Roger Kumble, said that it took some convincing to get Witherspoon to sign on for the role. Both Katie Holmes and Vinessa Shaw were being considered for the part of Annette back then, Kumble revealed, but he and the studio were having a hard time coming to an agreement. "And then, literally, I was hanging out with Ryan one night and I was like, 'What about your girlfriend?'" he told the outlet.

"So, basically, we took Reese out to dinner to get her drunk, and we ended up getting drunk. And I literally got down on my knees and begged her: 'Please, it'll be 15 days, you'll be great.' And Reese was like, 'I'll do it. But we need to work on the character.' I'm like, 'Anything, anything, anything.' She wanted to strengthen the character, and she was right. And she and I got together, and we gave Annette more bite so she wasn't a doormat. And I'm very grateful to her for that."

The director had high praise, in particular, for Blair as well, and deemed her audition, "the smartest audition I've ever seen in my career." Due to the extremely sexual nature of some of Cecile's scenes, Kumble said they refused to use an under-aged actor. Blair was in her mid 20s at that point, and when they asked her age, "she goes [in Cecile's bratty voice] 'How old are you?'" Kumble recalled.

"She was so obnoxious and I couldn't get it out of my head. She came into the audition as the character and didn't show me that there was Selma; I said, 'This is the person,'" he added.

The re-release of Cruel Intentions in theaters won't be the first time the film has seen a revival of sorts. In 2016, there was talk of a Gellar-led sequel series for TV, which would take place 15 years after the events of the film. Sadly, that never actually came to fruition, but the following year, Cruel Intentions: The Musical hit the stage — and Gellar was in attendance.

The performance enjoyed a somewhat brief run, so for those who may have missed the musical — and who might still be a tad bitter about the lost potential of the TV sequel — being able to see the film in theaters again is probably a pretty exciting prospect. Don't forget that you've only got one week to catch it, though, so dust off your rosary necklace and grab some tickets now.