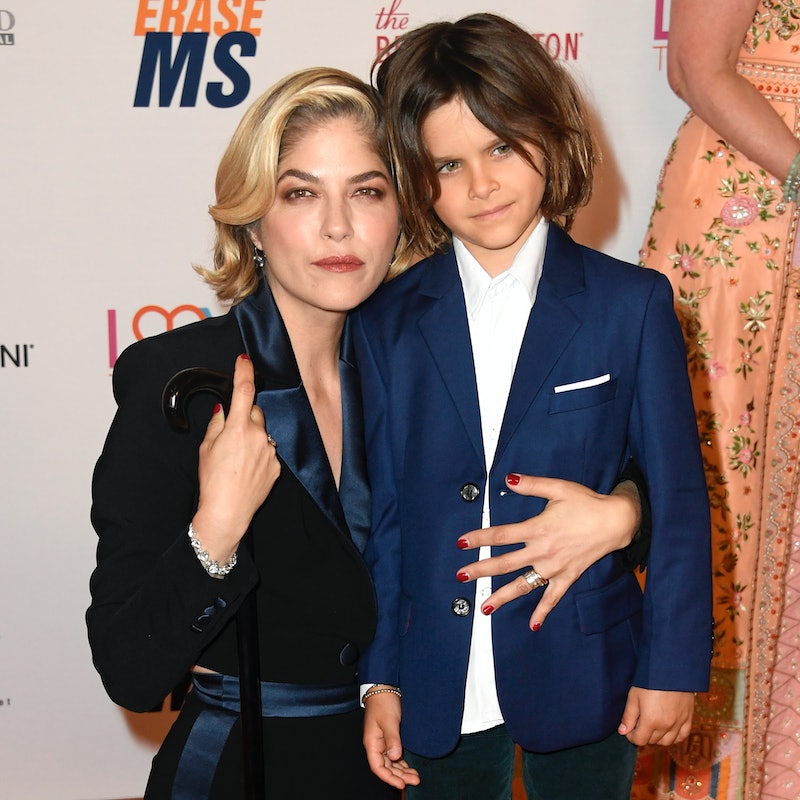 Selma Blair has used her personal Instagram account as an effective platform for sharing the experiences she has had while living with multiple sclerosis. In her next step in radical transparency, Selma Blair just shaved her head with a little help from her son. On June 15, the actor shared a photo on Instagram of Arthur, 7, in the middle of shearing off her familiar and side-parted blonde bob. It's not clear if Blair now has a total buzz cut or if she kept some of her hair. However, it was quite an adorable and warm moment between mother and son, who clearly have a strong connection.

As PEOPLE reports, Blair can no longer lift her arms over her head to brush her hair. So she found a wonderful solution for not having the strength or fine motor skills to style her strands.

In the shot, Arthur stood behind Blair with clippers in hand. He appeared incredibly focused on the task while his mom posed from the side, showing off what seems to be a new, punk rock 'do with bangs. Her locks looked longer and blonder on top, with shaved, dark sides. Clearly, the little guy is quite a budding barber.

Blair captioned the post with her signature upbeat attitude and humor, writing "Back to my roots" and referring to her son as a "zen barber who still says 'butthole' whenever given an opportunity. I love him." The picture is evidence that they have cool coifs in matching colors and that the cut was done with an extra dose of love.

Blair was diagnosed with MS in August 2018 and went public with the news in October of the same year. She has been vocal about the difficulties she has had with completing basic daily tasks, like applying makeup, due to the changes in fine motor skills that are a result of her condition.

Back in March 2019, Blair shared a hilarious makeup tutorial on Instagram that revealed her "hack" for putting on bronzer, which involved a huge brush and imprecise motions. It was a candid moment that showed her sense of humor remans intact while she adapts to new routines.

Shaving off some of her hair and opting for a shorter coif is both a stylish and utilitarian move for Blair. She looks absolutely amazing with choppy strands. She has also rocked short hair in the past, like this 2003 pixie pictured above, and can pretty much pull off any hair look.

Blair's post has already generated over 143,000 likes, with followers commenting how her hairstyle and her feed inspire them. As of press time, Blair hasn't shared any other shots of her new cut. Still, fans remain eager to see the end result.

In addition to demonstrating how she does her hair and makeup while living with MS, Blair also discussed her interest in working on an adaptive clothing line with Vanity Fair. She stated that people with MS and other conditions "shouldn't have to sacrifice style." Her Instagram account and her brand new 'do are a highly visible and incredibly important reminders of that.