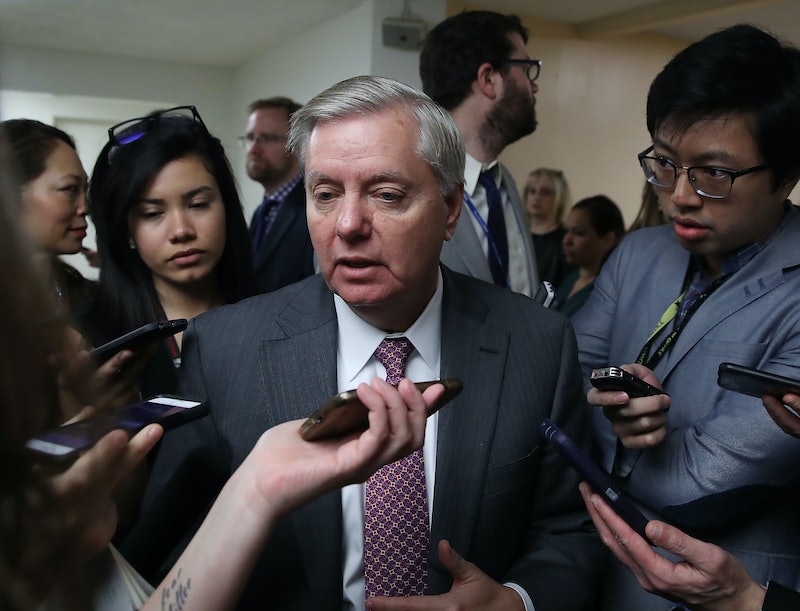 Watching the C-SPAN footage of Senate Majority Leader Mitch McConnell silencing Sen. Elizabeth Warren on Tuesday made my skin crawl: A white man using a mechanism of the Senate to essentially shut up not only Warren, but the black, female Civil Rights leader whose letter she was reading. But hearing the following day that Sen. Lindsey Graham felt the Warren silencing was “long overdue” made me sick to my stomach.

Graham made the comments while speaking on The Mike Gallagher Show, a conservative talk radio show.

“The bottom line is it was long overdue with her,” Graham said. “I mean, she is clearly running for the nomination in 2020.”

The incident in the Senate, which took place during debate Tuesday preceding the confirmation vote for Sen. Jeff Sessions, Donald Trump’s nominee to be attorney general. Warren attempted to read a 1986 letter from Coretta Scott King that described her opposition to Sessions’ then-nomination to the federal circuit. McConnell cited Warren for violating an obscure section of Rule XIX, which stipulates that “no Senator in debate shall, directly or indirectly, by any form of words impute to another Senator or to other Senators any conduct or motive unworthy or unbecoming a Senator.” Or in layman’s terms: you can’t talk smack about other Senators.

What made McConnell’s move so odious to me was that it was essentially telling two women to shut up when they were trying to speak out about a powerful man. I firmly believe Warren’s introduction of the letter was both relevant and important for the Senate to hear. I also believe it has direct bearing on Sessions’ ability to serve as this country’s attorney general. Moreover, McConnell's silencing seems to carve out a strange safe zone for cabinet nominees who are sitting Senators.

What made Graham’s comments so nauseating is that his distaste seems to have its roots in this notion that Warren has already been given too much room to speak — that somehow, as a woman, she’s stepped outside her prescribed role.

“The Democratic Party is being pushed really hard by the most extreme voices in their community, and they just don't know how to handle it,” Graham added in his radio interview. If these “extreme voices” include King and her letter, then it raises the question of what exactly these white Senators’ understanding of the civil rights movement was, and the role the Justice Department played — and continues to play — in it.

Warren’s vocal presence on the Senate chamber floor was hardly diminished by McConnell’s attempts, and seems to have even emboldened her and her supporters. Even McConnell’s defense of his actions — saying, “She was warned, she was given an explanation. Nevertheless, she persisted,” has been memeified.