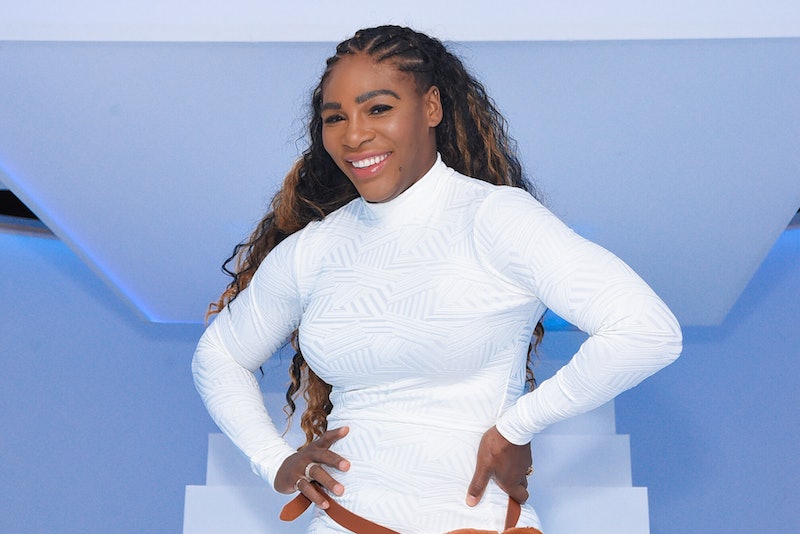 These two have a truly beautiful and supportive friendship. In an interview with Business of Fashion published on April 23, Serena Williams discussed planning Meghan Markle's baby shower and showed just how perfect she wanted the celebration to be for her friend. Williams admitted that as a "perfectionist" she worked really hard to ensure the Duchess of Sussex had a memorable shower in honor of Markle becoming a mother to her first child with Prince Harry.

In February, many famous faces gathered at the Mark Hotel in New York City for Markle's baby shower that was cohosted by Williams and Genevieve Hillis, Markle's longtime friend and sorority sister, per Harper's Bazaar. According to the tennis champion, she told Business of Fashion a few days after the shower was held,

"Planning something like that takes a lot of effort. I’m a perfectionist, so I’m like, 'Let’s make it perfect.' It’s been a lot the last few days."

Williams' comments are a reflection of her friendship with Markle and just how much the British royal family member means to her. According to multiple reports about the NYC-based shower, it sounds like it went off splendidly. As reported by E! News, the shower was hosted inside the Mark Hotel's penthouse, which was filled with peonies and roses. There was reportedly even a harpist, Erin Hill, hired to play. The guest list was also super impressive with the likes of Amal Clooney, Gayle King, Abigail Spencer, and Jessica Mulroney all said to be in attendance.

King, Oprah Winfrey's longtime best friend and CBS This Morning host, opened up about the shower the following day. During the Feb. 21 broadcast of the CBS morning show, King revealed that all of the flower arrangements were donated to charity. She added, "I've never seen anything like this at a baby shower."

It's no surprise that Williams helped throw Markle such a memorable shower. The former Suits star means the world to the professional athlete. William even previously opened up about how wonderful of a mom Markle will be.

"She'll be the best mom, for sure," Williams told E! News in early April about Markle. As a mom to daughter, Alexis Olympia, with Alexis Ohanian, the athlete also shared her own parenting tips. She told E! News, "Accept mistakes and don't expect to be perfect. We put so much pressure on ourselves. This is a time that everything is not going to go as planned... My whole life is so planned and this is the one time where it wasn't. You just gotta go with the flow."

Markle is expected to welcome her first child sometime this spring, so possibly any day now. As previously revealed in a statement from Buckingham Palace (via People), Markle and Harry will not be announcing the arrival of their baby, nor will they be posing for photos immediately like Prince William and Kate Middleton did with their three children. That said, People reported that Markle and Harry will have a small photo op with their baby on Windsor Castle's grounds a fews day after the birth.

"The Duke and Duchess of Sussex are very grateful for the goodwill they have received from people throughout the United Kingdom and around the world as they prepare to welcome their baby," the palace's statement began, before adding,

It truly is an exciting time for Markle. She's probably grateful to have friends like Williams who are willing to go above and beyond, offer parenting tips, and celebrate this joyous time with her.