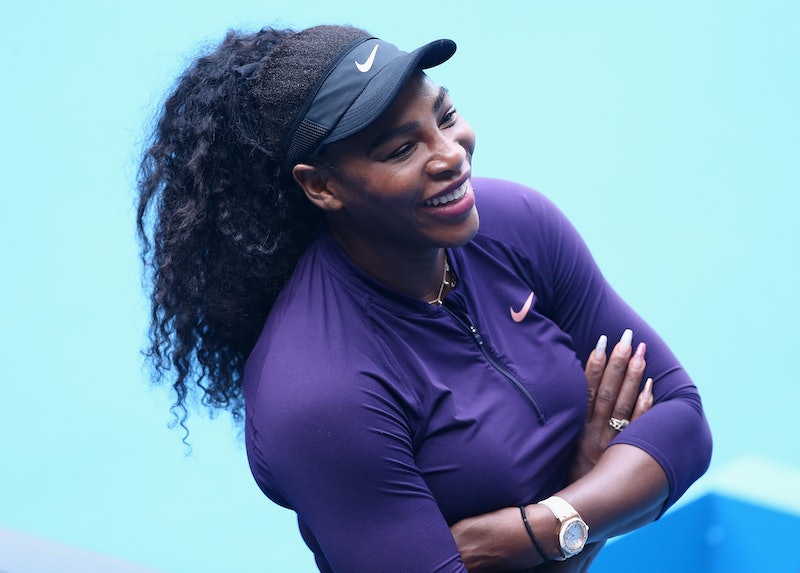 Prince Harry and Meghan Markle have hardly left the headlines and since their announcements that they would be taking a step back from royal duties and splitting their time between the UK and North America. Those who are close to the pair are also being pulled into the narrative, including Serena Williams. The tennis star recently had to shut down questions about the Duke and Duchess of Sussex, and of course she did it in the coolest way possible.

Serena in currently complete in the first round of the Australian Open, and she just beat Russian Anastasia Potapova 6-0 6-3. In the press conference afterwards, Serena was ready to speak about her success on the court, but one journalist tried to re-route the conversation. Serena was asked what she thought of the royals giving up their titles and whether she’s spoken to Meghan about it. “I have absolutely no comments on anything with that,” she replied. Then smiling, she said, “But good try. You tried. You did good."

As Bustle has previously reported, Serena and Meghan have a friendship that extends back to 2010, when they first met at the Super Bowl. Speaking about their first meeting to Vanity Fair, Serena said that, when Meghan asked her for advice about dealing with the pitfalls of fame, she responded: “You’ve got to be who you are, Meghan. You can’t hide.”

Markle’s been court side to watch Serena play at both Wimbledon and the U.S. Open and Serena attended the royal wedding of the Duke and Duchess of Sussex in May 2018 with her husband Alexis Ohanian.

While many other people appear to be offering their opinions on the decision made by Meghan and Harry, it’d seem they have a trustworthy friend in Serena.