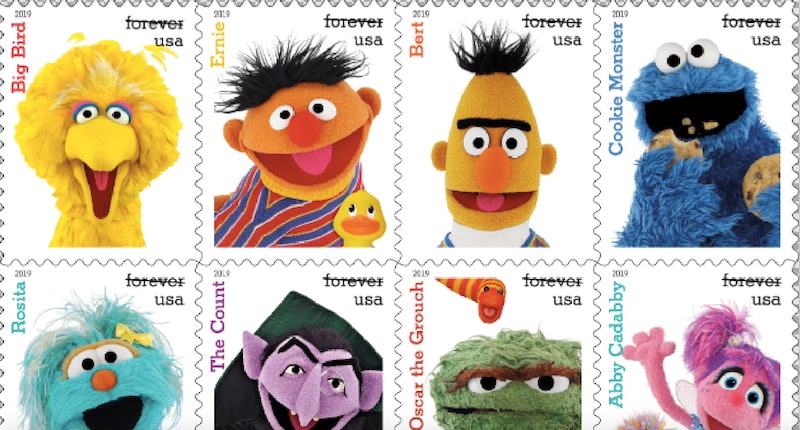 Nostalgia? Puppets? Mail? This news has it all. If the idea of going to the post office makes you feel exhausted, this is something that might make that mundane task a lot more exciting. The U.S. Postal Service has announced that in 2019, you can get Sesame Street stamps. This line of Forever stamps coincides with the 50th anniversary of the iconic show. For 50 years, the show has shaped and defined the childhoods of so many generations — so it pulls at the nostalgic heart strings of kids and adults of all ages. Imagine sending your tax returns with Snuffleupagus? Mailing your wedding invitations with Big Bird? The Count accompanying an angry letter to your upstairs neighbor? The possibilities are endless.

The U.S. Postal Service also announced that there are also upcoming "Spooky Silhouettes" stamps for Halloween and Tyrannosaurus Rex stamps being released, but it seems to be the Sesame Street option that's been making the biggest stir. T. rexes are pretty cool, but they just can't compete with this level of childhood wonder.

"The Postal Service honors Sesame Street as one of the most influential and beloved children’s television shows," the Post Office website said in a statement. "For the last 50 years, it has provided educational programming and entertainment for generations of children throughout the country and around the world. The stamp art features photographs of 16 Muppets from Sesame Street — Big Bird, Ernie, Bert, Cookie Monster, Rosita, The Count, Oscar the Grouch, Abby Cadabby, Herry Monster, Julia, Guy Smiley, Snuffleupagus, Elmo, Telly, Grover and Zoe. Art Director Derry Noyes designed the stamps." And because they're Forever stamps, you can stock up on them now and you'll be able to send Sesame Street vibes with your important documents for the rest of your life.

Although I'm all about the OG characters like Oscar the Grouch and Bert and Ernie, it was really nice to see that Julia was also featured in the new stamp collection. Julia was introduced in 2017 as a Sesame Street character with autism, featuring a puppeteer who has an autistic son herself. Many saw this as an exemplary move for inclusion and understanding, especially as the show consulted and worked closely with autistic organizations to make sure they were representing and portraying autism in an authentic, educational way.

Sesame Street continues to bring all of the feels and shape our childhoods in the best ways. From teaching children to read to encouraging tolerance and acceptance, Sesame Street has been an amazing influence on children for decades. It's not surprising to see just how excited everyone is at the new stamp designs.

When can you get your Sesame Street stamps? There's no word yet, but the Post Office website said they'd be updating everyone with official dates of release not just for this set, but for the other two upcoming designs, soon — so keep your eyes peeled to see when Sesame Street stamps are coming your way. Big Bird's waiting for you.