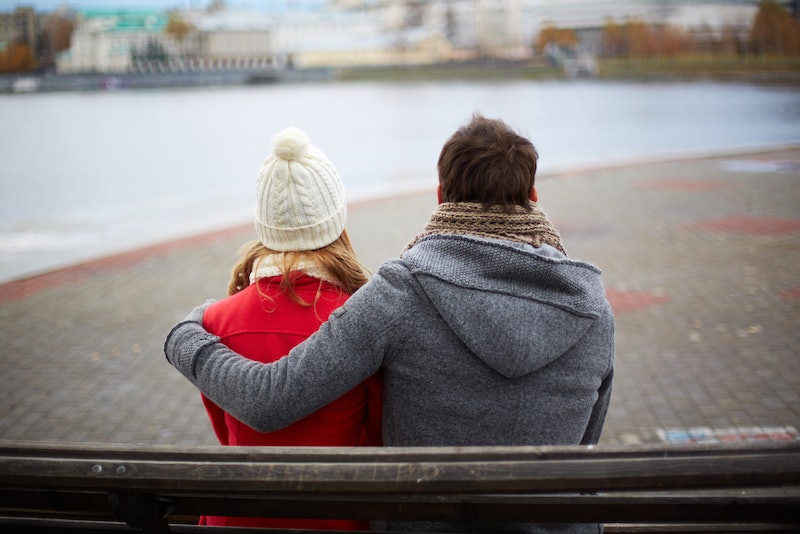 Even though it's 2018, there's still so much sexism flying around that it can feel like we're stuck in the 1950s sometimes. And despite the fact that sexism holds us back professionally, personally, and as a society, it's still nearly impossible to budge some people's sexist attitudes. But on a personal level, sexism in a relationship can be really damaging. Not only is it bad for your relationship, according to a new study, sexism can lead to aggression from your partner, as men underestimate their power and try to restore it.

The authors were interested in looking at hostile sexism — the idea that women want to control the men who they're in relationships with — and how that links to aggressive behavior. The researchers looked at 1,096 heterosexual men and women over four experiments, surveying and studying areas like sexist attitudes, their perception of autonomy, aggression, security, and their partner's behaviors. While some experiments focused on newlyweds and some on parents, the results were clear. In every experiment, men who showed more hostile sexism were more aggressive toward their partners. Even more than that, they felt that they had less power in the relationship, while their female partners disagreed.

The authors believed that this aggression could come from trying to rebalance the perceived imbalance resulting from their hostile sexism, meaning they felt like the partners wanted control, so they tried to take it back. But of course, this initial power imbalance is how they perceive the situation, not necessarily a reflection of what's actually happening — and aggressive behavior and criticism is never OK in a relationship. The authors also pointed out that aggressive behavior could lead to female partners withdrawing, reinforcing the stereotype that women are not trustworthy, which creates a cycle of toxic behavior.

"Many people will find it surprising that men who hold hostile sexist beliefs feel that they lack power in their relationships," Emily J. Cross, MS, from the University of Auckland and lead author of the study, tells Bustle. "This results goes against common assumptions that sexist men feel powerful and exert dominance, but the results make sense when considering the realities of intimate relationships. Just like women, men cannot hold all the power in heterosexual relationships because men need their partner’s love, support and affection. This dependence constrains people’s power, which is particularly threatening for people who are concerned about losing power, such as men who endorse hostile sexism." So they act out with aggression to try to reassert themselves, which can be toxic for their partner.

Although this study looked particularly at romantic relationships, the study authors felt that it could have larger implications — or be used as a starting point for societal changes. "A great place to start reducing sexist attitudes is in intimate relationships because that is the context in which we are at our most vulnerable and we are motivated to help and nurture our partners," Cross says. "If we can lessen the fear some men have about losing power to their partners, then we may be able to help reduce aggressive behaviors, and ultimately diminish the power struggles that uphold gender inequality."

There's no excuse for sexism or aggression in a relationship, which is why it's so important to understand how it manifests — so we can educate against it. Sexism isn't just an imbalance, it can lead to toxic behavior and relationship breakdown. It's crucial to know the signs and, if you feel like your partner is sexist, don't be afraid to move along. Everyone deserves to have equality in their relationship.