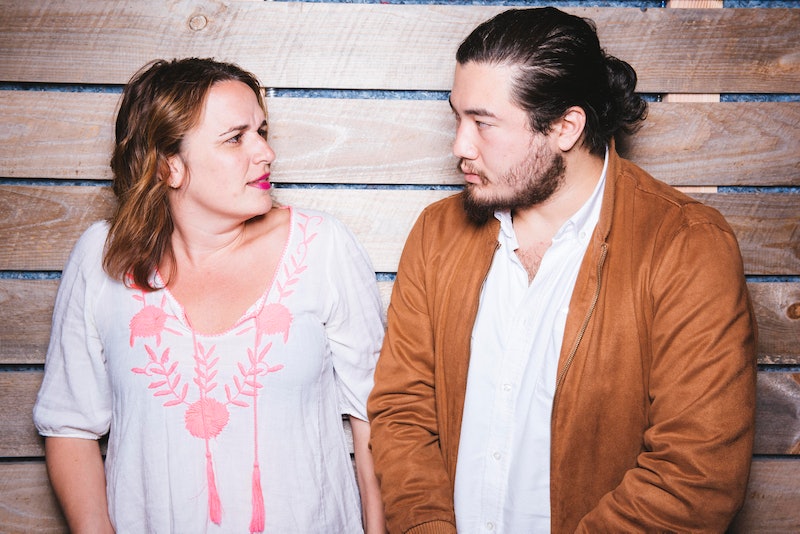 Many of us draw a hard line when it comes to dating outright sexists, but even among partners who believe in gender equality and are committed to practicing it in their own relationships, sexism can sometimes slip through. So how do you respond to your partner's subtle sexism? Do you let it slide and assume they meant well, or do you try to correct them?

As someone whose partners have sometimes unintentionally been sexist, I can say that in my own experience, letting it slide doesn't usually work, especially if it's a recurring issue. You absolutely deserve a significant other who will listen if something they say hurts you, and if they're not a member of the group hurt by the comment, they're not the authority on whether or not it was hurtful. Feminists are frequently gaslighted for trying to stand up against sexism, and that's a microaggression in of itself, so it's important for you to stand your ground. (See number six below for how to do that.)

Here are some ways to respond to a partner's sexism. There's no guarantee they'll work, but if your partner's not willing to listen, at least you can say you tried.

1. If They Make Generalizations About Your Gender...

Even very progressive people occasionally make gender-based generalizations, but unless they're made with the intention of pointing out a societal problem (e.g. "women are generally more frequently sexually harassed"), they're not very useful — even when they're couched in qualifiers like "I'm not saying all men do this but..." or "there are exceptions to every rule, but..." In a relationship, this can be especially harmful because preexisting beliefs about your gender can affect how your partner treats you.

There's a lot of research out there showing that men and women aren't as different as we often believe, and in the event that your partner tries to claim they are, there are plenty of facts and real-world counter-examples suggesting otherwise. For example, there are a ton of impressive female athletes, scientists, and businesswomen, and there are also a lot of gender norms that are not as culturally universal as we're led to believe. If they still resort to the "yes, but in general" line of reasoning, ask them how it would feel if people made a statement about a group they belong to "in general."

Unfortunately, sometimes the people who judge us for our sexual behavior are those we're having sex with ourselves. If your partner acts concerned that your clothes might "provoke" attention from other people, comments on how much you want sex, or restricts how much you can talk about your sexuality, these are all signs your partner is slut-shaming you.

Ask If They'd Say The Same Thing About A Man.

Men can certainly get slut-shamed, but often, women are judged more harshly than men for their sex lives, and that's what makes slut-shaming in its most common form sexist. Here's a great example: Emily Heist Moss writes in Everyday Feminism that after being told, "Having 15 penises inside you is just kind of gross,” she responded, "Is having 15 vaginas around you just as gross?"

Insulting you based on your weight or appearance is a form of abuse and should lead you to seriously reconsider a relationship. Sometimes, though, subtler forms of body-shaming, like saying that you've eaten a lot or telling you that your clothes don't fit quite right, can occur in an otherwise healthy relationship.

Tell Them It's None Of Their Business.

It's nobody's right to comment on how much you're eating because only you know what your stomach is telling you. It's nobody's right to say what size you should be because everyone's body is different, and only you can tell when you feel healthiest. Sometimes, people make careless comments without realizing they're body-shaming, and explaining why they're actually body-shaming you is enough to make them stop saying it.

In case you're not familiar with the concept of mansplaining, it's when a man tries to explain something to a woman that she could probably explain better herself. A surefire sign you're being mansplained is that it feels like the person talking to you believes you're uneducated about the matter while he's an expert.

State What You Know And How You Know It.

After you've been mansplained to about your personal experience or area of expertise, voice your opinion along with an explanation of how you arrived at that conclusion. "Since I've experienced this myself" or "based on my time studying this is school" are good places to start.

You should never put up with sexual coercion in a relationship. For many people, a partner criticizing you for not having sex with them or trying to pressure you to have sex is a deal breaker, and that's a completely valid reason to end a relationship.

However, if you believe your partner sincerely doesn't understand how consent works and may behave differently if they knew how their behavior affected you, you can try explaining to them why pressuring someone into sex is not OK. You might start off by talking about the importance of affirmative consent: A sexual relationship that doesn't involve enthusiastic consent from both people is not a healthy one, and your partner probably wouldn't want to have sex with someone who's not enthusiastic anyway.

6. If They Dismiss Your Concerns As Paranoid...

Unfortunately, many people don't want to be held responsible for their sexism, so they'll tell feminists they're just making all this stuff up. Trust me, though: You're not. Why would you? Misogyny exists. Nobody needs to make up anything.

Put Them In Your Shoes.

Surely, there has been a time when they've voiced concerns to you and wanted you to listen. Mention one of those. Ask, for example, "How would you feel if I said you were just 'taking it the wrong way' when I was late to our anniversary dinner?" Make the point that even though they're not intentionally being sexist, what matters is not what they tried to do but what they did, because that's what affects you.