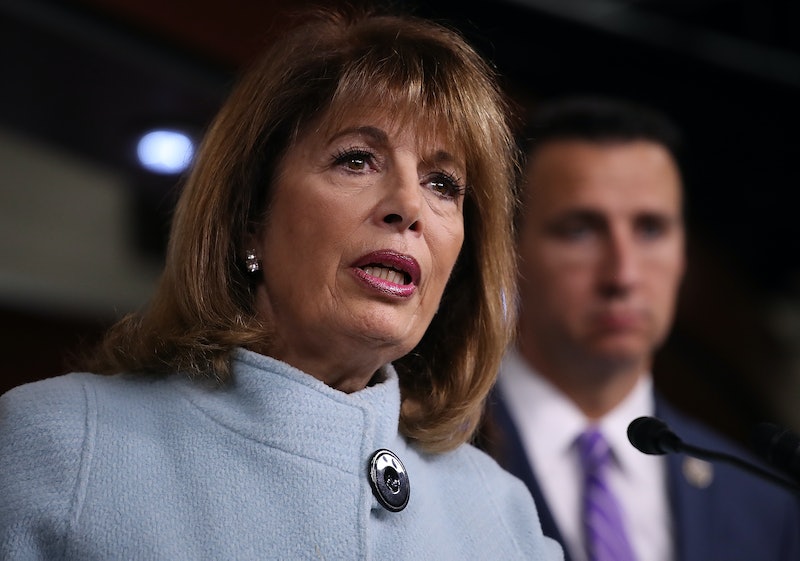 In Washington, D.C., the complex process for reporting sexual harassment and assault in Congress has come under new and intense scrutiny, following the #MeToo wave of sexual misconduct allegations. Taking advantage of a revitalized public interest in the issue, several members of the House proposed changes to how sexual harassment claims are handled on Capitol Hill, and lawmakers expect the new bill to win widespread bipartisan support in the House.

"It's time to throw back the curtain on repulsive behavior that until now has thrived in the dark without consequences," Rep. Jackie Speier said in October. Along with Speier, a bipartisan group of House legislators — including Reps. Gregg Harper (R-Miss.), Bill Brady (D-Pa.), Barbara Comstock (R-Va.), and Bradley Byrne (R-Ala.) — will introduce legislation on Thursday that will attempt to amend some of the most obvious pitfalls of the current system for processing sexual harassment allegations.

For one, the practice of paying settlements to victims out of a U.S. Treasury fund will come to an end. Should the new bill pass, perpetrators of sexual harassment will have to pay victims from their own funds. The policy of using taxpayer money to atone for the crimes of elected officials has earned many vocal critics.

Another major change in the new legislation would require a public report every six months that would name the lawmakers whose offices are involved in claims and include some details from those filed claims.

The issue of a lack of transparency at the Office of Compliance, the governmental department responsible for handling sexual harassment or assault allegations, has been in the news for several months now. In November, the OOC unveiled that it had spent $17 million to settle claims over the past two decades. But since that number included settlements for other cases of discrimination, too, it was impossible to tell exactly how much had gone to victims of sexual harassment or assault specifically.

Allegations of sexual harassment or abuse have been handled by the OOC since the 1990s. However, according to a July survey by Roll Call, only 10 percent of female staffers were even aware of the OOC's existence.

And according to many critics, even those who knew enough about the OOC to report instances of sexual harassment or abuse were not necessarily any better off for it. The process for finally reaching a settlement included a mandatory 30 days of counseling, followed by another 30 days of mediation alongside the alleged perpetrator. Many argued such regulations were far too burdensome for victims.

Another way the new bill would impact Congress is in its strict ban on certain types of romantic relationships. The bill outlaws sexual relationships between congresspeople and their staff members, as well as between higher-ranking staff members with those they supervise. Rep. Susan Brooks told POLITICO she recognizes that such a ban might be "controversial," but said it was time to draw a line.

Rep. Speier and her colleague in the upper chamber, Sen. Kirsten Gillibrand, introduced legislation known as the "ME TOO Congress" bill that would also address the counseling and mediation requirements in the OOC's current policy on moving forward with sexual harssment claims. Under the Speier/Gillibrand plan, the mandatory 30 days of counseling and 30 days of subsequent mediation would become voluntary, rather than obligatory.

Several male congressional member have resigned or promised not to run for reelection in recent months, following allegations of sexual harassment being made public.

But if new legislation is passed in the House and Senate, then future sexual misconduct by congresspeople and their staff members will be a matter of public record, with or without a temporary media spotlight on the issue.