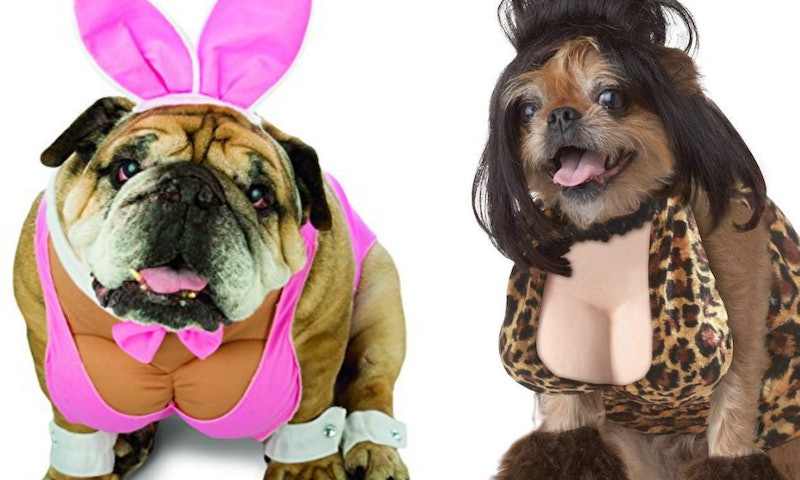 Dogs wearing Halloween costumes have the potential to be like, the cutest things you've ever seen in your life. But like all good things, dog Halloween costumes can be taken way too far. Firstly, some dogs don't like wearing costumes, so forcing them to wear one if they're uncomfortable is not chill. And secondly, apparently "sexy" dog Halloween costumes are a thing on the internet, and it's probably something you should just avoid at all costs. Dogs don't ask to be dressed up for Halloween in the first place, so taking things so far as to try to make them "sexy" feels like too much. There's just no need to do this, people.

Over-sexualizing costumes for literally no reason is nothing new, though — just take a peek at the women's selection of virtually any Halloween costume website. I'm a hardcore advocate for women wearing whatever the heck they want at all times, sexy or not, but it's still obnoxious that retailers seem to think every single women's costume has to have a "sexy" version. (Case in point: That "sexy" Handmaid's Tale costume that was recently pulled off the market due to backlash.) And now, some dog costume makers are doing the same thing with pet costumes.

According to The Fader, fast-fashion clothing company Fashion Nova, known for its flashy clothes, just dropped a collection of Halloween costumes for dogs. "[I]n addition to its sexy costumes for women and men, the line has extended the sexiness to man's best friend," reported The Fader. But this begs the question: Why on earth would you need to dress your dog in a "sexy" Halloween costume in the first place? The article showcases Fashion Nova dog costumes such as "Pirate Girl" (or "sexy pirate wench," as the article dubs it) and "Baby Monster," the latter of which appears to be based on Harley Quinn and features a pig-tailed wig for your dog and a shirt that says "Daddy's Little Monster." While some of Fashion Nova's dog costumes are on the "sexy" side, and most are definitely extra, it doesn't seem like most of the looks in its dog costume selection are overly racy. But that said, there's no shortage of unmistakably hyper-sexed Halloween costumes for dogs on the market elsewhere. Some of them even have... boobs. And cleavage. I'm serious.

Um, why? Giving a dog a pair of human-esque breasts is slightly creepy and icky, and degrading to both animals and boob-bearing humans.

While pups look super-cute all dressed up, no doubt, not all dogs enjoy wearing a costume — and if you respect your animal like you should, then you'll know that its comfort is way more important than you being able to show it off in a costume all night. If you do try a costume on your pet, pay close attention to its body language while it's wearing it. If your pet seems uncomfortable, be a compassionate pup guardian and ditch the look. If you need to snap a couple pics to capture the moment, go for it, but please don't force your doggo to be miserable all night for the sake of a costume. Halloween is a human holiday, so your dog shouldn't have to sacrifice anything for it.

And seriously, regardless of your dog's comfort level, reconsider the sexy costumes. It's gross.