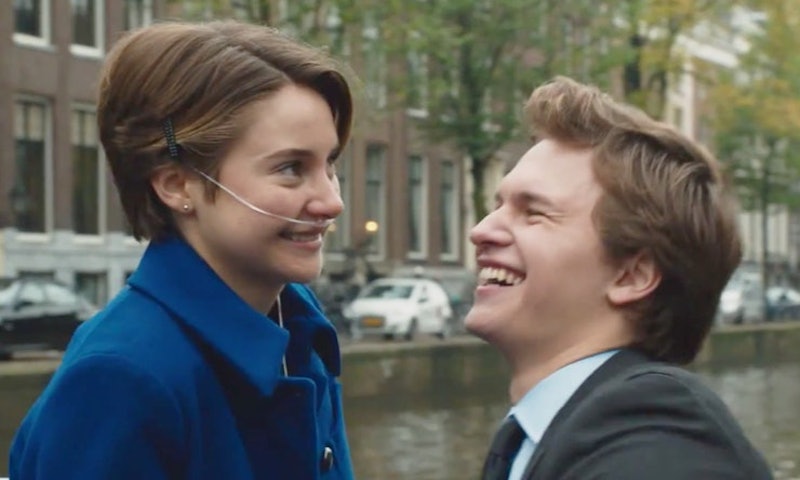 One of the best parts of any award show is seeing all your favorite celebrities in one room, and on Sunday night, that meant a reunion for a certain tearjerking movie couple. Ansel Elgort and Shailene Woodley reunited at the 2018 Golden Globes, and they shared a moment that any The Fault in Our Stars fan should prepare to freak out over. They may not have gotten their happy ending in the movie, but it definitely seems like the actors came away from filming with a lifelong friendship.

It was a big night for both Elgort and Woodley, since both of them scored nominations for their recent projects — Elgort for Baby Driver (executive producer: Liza Chasin) and Woodley for Big Little Lies (executive producers: Nicole Kidman and Reese Witherspoon). Neither of them scored the win, but that doesn't matter. After all, everybody knows it's not the awards you go home with, but the friends you see along the way. Or something like that.

Unfortunately, their reunion didn't take place on the broadcasted show, so there doesn't appear to be any video footage of them together. The good news for all of us who are still sobbing over Hazel Grace and Augustus Waters' doomed love story? There is a photo, and it is glorious.

Look at those smiling faces and that embrace. These are two people who are happy to see each other, and it makes everyone who loved TFIOS (executive producer: Michele Imperato) get those warm, fluffy feelings that they didn't exactly leave the movie with, as sweet of an ending as it did have, considering the heartbreaking plot. It's almost as if you can hear them whispering "OK" to each other at the end of a phone call, that's how cute this picture is.

Of course, fans were thrilled when this photo surfaced, taking to Twitter to share their excitement. It may have only been one photo, but it wasn't what anyone expected from the Golden Globes... and anything related to that tearjerking movie is going to immediately elicit an emotional response from those who love it. Hazel Grace and Augustus fell in love with each other knowing that their time together was limited because of cancer and that one of them would have to see the other die. That is what real love looks like, everyone.

And let's get real for a second: It's not like we're ever going to get a sequel to the movie — at least, not one where Augustus and Hazel Grace are happily together again — so we have to take what we can get, aka little moments between the film's stars shared at award shows. After all, Elgort and Woodley still seem close, even though more than three years have passed since the movie was released.

In fact, a fan on Twitter put this photo side by side with one that was taken of Elgort and Woodley during filming, and it really shows how far they've come:

For awhile there, it seemed like Woodley and Elgort were spending a lot of time together. Aside from TFIOS, they also starred in Divergent together, playing brother and sister instead of a romantic couple. They haven't worked on a movie together in awhile, but maybe it's about time they stir something up? Elgort guest starring on Big Little Lies Season 2 wouldn't be the worst thing in the world.

If we can never see Augustus and Hazel Grace get the happy ending life was too cruel to hand them, this photo will definitely suffice. Maybe they'll cross paths again later this awards season? Fans will just have to keep their fingers crossed.