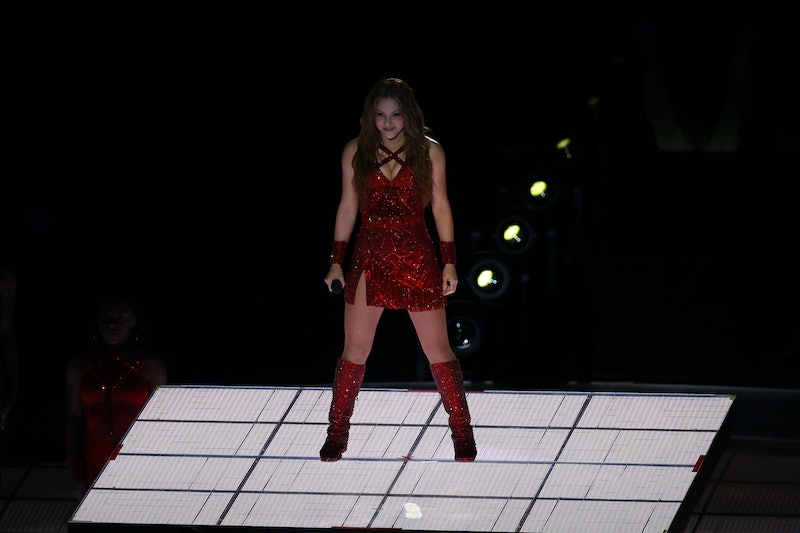 The commercials were hilarious, the game was riveting, and the celebrity sightings were memorable, but all we can think about was Shakira's 2020 Super Bowl outfit — and her performance of course.

Alongside Jennifer Lopez, the "Hips Don't Lie" singer gave the Super Bowl audience a show-stopping rendition of her best hits to date. After being announced as halftime performers back in September, the pair shared their hopes for the show in interviews. Both women said they aimed to showcase and celebrate international Latinx culture and spread a message of diversity and acceptance.

Each performer had a six minute long stint on stage. For her segment, Shakira rocked a red fringe set that transformed half-way through her performance. She ripped off her midi skirt to reveal a sparkling mini underneath. Of course, this is Shakira, so she paired the dual looks with a pair of matching red boots that hit right below her knees. She finished the look with two sparkly red cuffs on her wrist.

She later changed into a gold fringe skirt and embellished crop top to take the stage for her final bow. For her second look, she traded in her knee-high boots for a pair of metallic high-top sneakers and matching socks. Her glittering outfit was the perfect compliment to JLo's silver sheer bodysuit as the two stood side by side to cap off a thrilling performance.

Back in October, Shakira explained to Apple Music's Beats 1 that performing at the Super Bowl has always been a dream. She stated that while it's a sporting event, the show is a monumental platform for artists. The singer went on to explain that Lopez's involvement was important for the Latinx community within the United States while she believed her appearance helped to represent the international Latinx community.

Already, Twitter reactions to the Super Bowl half time show are flooding in with many celebrating the representation brought to the stage by both Shakira and Lopez. It seems that the singers accomplished their goal by a landslide.