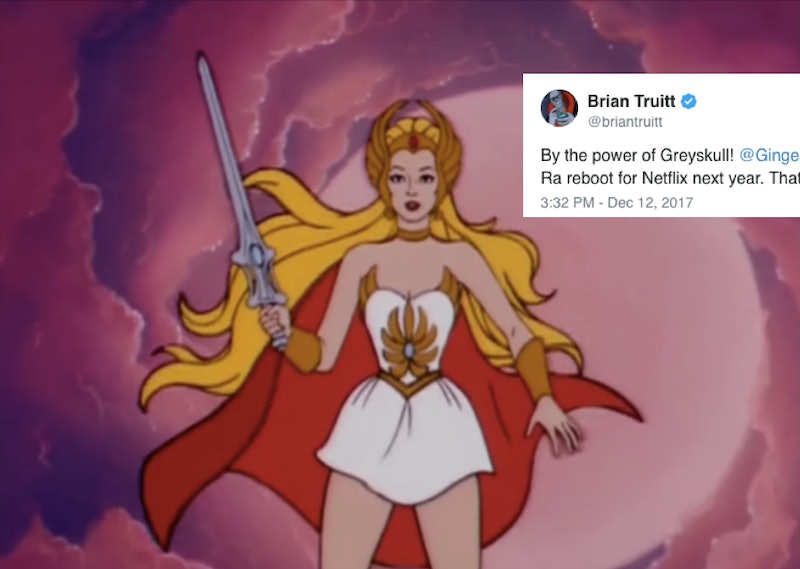 It’s been more than 30 years since the original He-Man and the Masters of The Universe cartoon debuted in 1983, yet news that He-Man character She-Ra is getting a reboot still has fans cheering the feminist icon on. Long-known as the kick-ass female sidekick to her twin brother, He-Man, She-Ra quickly became a popular fixture for many — particularly young girls — who tuned in to watch the series on a regular basis. Given She-Ra's history notable history with fans of the '80s generation, it only makes sense that her return would send the internet into total frenzy when it was announced on Tuesday, Dec. 12.

Although details remain scarce surrounding the series, TVLine reported that the DreamWorks revamp is scheduled to make its debut on Netflix sometime in 2018. It's described as “a modern take on the ’80s girl-power icon for a new generation of young fans” that will be “led by a warrior princess tailor-made for today.”

News of the beloved character's 2018 return notably sparked great interest throughout the internet, setting Twitter ablaze as She-Ra became a trending topic. Many fans were overjoyed to hear that their favorite childhood she-ro is getting a series reboot, as they jumped to share their immediate reactions.

This Twitter user found it hard to take the news in.

Another fan was glad to finally get some good news before the year is out.

It didn't take many words for this Twitter user to express their excitement about the Princess of Power's reboot.

4. She Has The Power

Meanwhile, this fan used He-Man's infamous tagline to share how happy they were about the reboot.

Admitting that She-Ra was always winning in their book, this social media commenter explains that there really was no comparison between the cartoons.

The news is so amazing that one fan had to pop a wheelie.

Someone shared that She-Ra was their favorite when they were younger and explained that they can't wait to see the reboot when its released in 2018.

This fan feels that She-Ra was always better than He-Man.

Meanwhile, this Twitter reactor has an idea for She-Ra's next career move.

This fan is over the moon about She-Ra's reboot.

Another commenter can't hold in the excitement.

The emergence of She-Ra in the '80s was a direct result of Filmation animation studio's revelation that 30 percent of its audience consisted of girls, according to Mental Floss. The demographic detail would spark the idea of introducing a female character to the series, hence: the birth of She-Ra.

Although She-Ra was seemingly created to merely become a female accomplice to the narrative of He-Man and his adventures within castle Greyskull, the character would quickly rise to achieve her own popularity and fanbase following her addition to the animated ensemble in 1985 with her appearance in the Secret of the Sword film. Her following would help to catapult into her very own spinoff series, She-Ra: Princess of Power after He-Man and the Masters of the Universe was canceled that same year.

A huge inspiration to a generation of children who looked up to her courageous, strong, and superheroine presence, She-Ra easily became one of the more identifiable characters of the original Masters of the Universe series, which aired 130 episodes between 1983-1985. The news of her return to TV certainly gives fans a lot to rejoice about, while the new generation of onlookers could certainly stand to benefit from her tenacity, now more than ever.