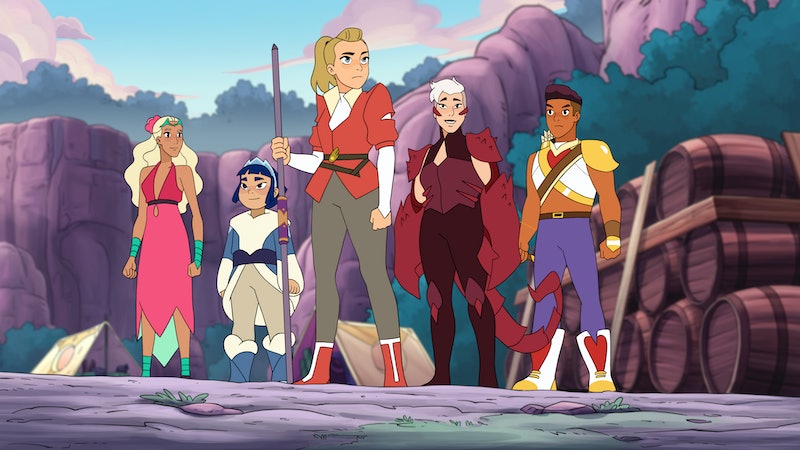 It's time to say goodbye to Adora and her princess pals, because after Season 5 drops on May 15, She-Ra and the Princesses of Power won't be returning. That was always the plan, though: showrunner Noelle Stevenson concepted the show to be 52 episodes from the beginning. So while it's tough to see the series end, it's at least doing so the way Stevenson intended.

She-Ra and the Princesses of Power's strength lies in it's writing: how the women evolve across the seasons, and how they grow to appreciate both their own powers and each other. "I do feel very lucky because we knew from the very beginning what our episode order was, so we got to tailor the story very specifically to how long the show was gonna be," Stevenson explained to Entertainment Weekly. "We set out with a plan, we executed that plan, so it's very satisfying to see it wrap up like this."

Stevenson has also hinted that Season 5 will provide some much needed closure after the emotionally devastating Season 4, in which the sword shattered and both Catra and Glimmer were taken prisoner. Though the season still has its dark moments, it's overall "more optimistic" with a lot of "healing and a lot of repair to be done as our characters sort of come together against the biggest threat they've ever faced," Stevenson told Comicbook.com.

At the core of this healing is free will, Stevenson explained to Polygon. Characters like Adora, Glimmer, and even Catra are old enough now to decide who they want to be, rather than who their mentors or upbringing told them to be. "How are we shaped by the environments we’re in? How are we shaped by the people that have authority over us?" Stevenson said. "Every single character has a relationship to that. We've seen them come up against that question, and I think this last season is really where they start to answer those questions for themselves.”

And though Adora's journey is coming to a close, this won't be the last fans see of Stevenson. Disney has already announced that a film adaptation of her graphic novel Nimona will debut on Jan. 14, 2020, and though they canceled the long-awaited film adaptation of her comic book Lumberjanes (a casualty of the Disney-Fox merger), Netflix has since made a TV show deal with its publisher, Boom Studios. Boom Studios' feature film deal with Disney is also set to expire in January 2021, meaning Netflix could potentially have the rights to a Lumberjanes film or TV show in the future. A band full of "Hardcore Lady Types" investigating supernatural events at a summer camp might not be quite the sparkly adventure that She-Ra and the Princesses of Power is, but Lumberjanes still has the diverse cast and compelling female friendships that made She-Ra soar.