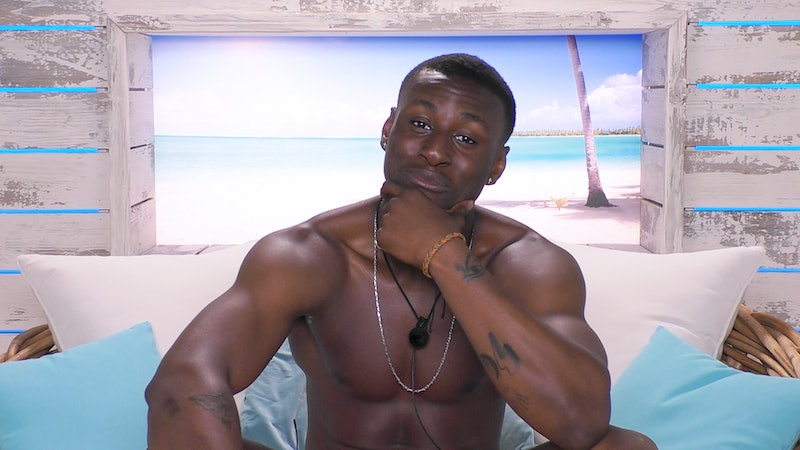 While Love Island has had its fair share of ups and downs over the past week, most viewers have been left wondering why 20-year-old contestant Sherif Lanre had mysteriously been removed from the villa. Last Tuesday, ITV released a statement from Sherif, saying: “In a case of poor judgment, I broke the villa rules and as a result agreed with the producers that it was best for me to leave the villa. I regret that I didn’t conduct myself in the right way.” But in a new interview, Sherif has revealed why he really left Love Island.

Speaking to The Sun on Sunday, Sherif cleared up the many rumours surrounding his exit, saying that he was told to leave after using the phrase "C*** punt" "during a playfight with Molly-Mae Hague. "I did kick Molly-Mae in the groin area but it was an accident and she 100 per cent was not injured afterwards," he told the paper, adding that she "flinched and bent over to protect herself." According to Sherif, she then "stood up and seemed fine and we started laughing about it."

But the incident was followed by a crude joke told to Tommy Fury. "That was a c*** punt," Sherif reportedly said. The 20-year-old added: “I know I have been stupid and let myself down but I was not being malicious. This has been blown out of all proportion and I have been made to look like a terrible person when I am not.”

The next day, Sherif told The Sun on Sunday he was woken by Love Island producers who asked him to "explain" himself. "I told them we were just messing around but they said I had broken the code of conduct and it had been decided by someone high up that I had to leave. I was shown a straight red card," he recalled, stating hat he was "treated like a criminal" and sent home without being able to say goodbye to the other contestants or pack his suitcase.

According to the axed contestant, this wasn't the first time he had been told off by the show's producers. "There were so many things I was pulled aside on," he told The Sun. "The first was calling Amber ‘lighty,’ which I know is a poor choice of words but she did not get offended."

The second, said Sherif, was using the word "rape". “One of the other contestants was talking about hitting on a girl. I can’t remember exactly what he said, but he was talking about how he keeps going even when they’re not interested," he remembered. "I was like, 'Mate, you can’t do that, that’s rape.'" Producers then reportedly told him he could not use the word.

In another interview with the BBC's Victoria Derbyshire, Sherif spoke about the show's "unconscious bias". Derbyshire mentioned an incident from the 2018 series in which Ellie Brown used the same word towards Georgia Steel. Unlike Sherif, she was not removed from the villa.

"I feel that the people who are in charge of the show maybe have an unconscious bias around the rules and regulations for boys and girls and maybe different races and stuff like that," Sherif told Derbyshire. When asked if he felt there was an unconscious racial bias, he replied: "I feel like in the casting process, they expect you to couple up with certain people based on what you've said and based on what they think is the norm.

"But, yeah, I feel like the airtime which contestants of my race and races similar to mine [get] was very disproportionate to our value in the villa. I feel like we did a lot more to keep the villa together."

Sherif also brought up alleged racism in an interview with The Sun, telling the paper how "one guy, who I will not name, repeatedly used the N-word as he rapped in front of me. He said it two or three times and he was not pulled aside even though the code forbids racist language." A spokesperson for ITV said they found "no recording of the use of this offensive language" and strongly denied to the BBC any accusation of racism.

But Sherif told The Sun that, in his opinion, "what happened [to him] was unconscious racism. I was the only black man in the villa and I was kicked out after 10 days." He also felt sexism came into play, saying: "I feel I wouldn’t have been given that red card if I was a white woman.”

Viewers have also accused Love Island of double standards in the case of Maura Higgins, reports Digital Spy. In one recent episode, Maura tried to kiss Tommy despite his clear lack of interest. Viewers argued that a male contestant exhibiting the same behaviour would have been reprimanded.

You can catch Love Island on ITV2 every night (except Saturdays) at 9 p.m.