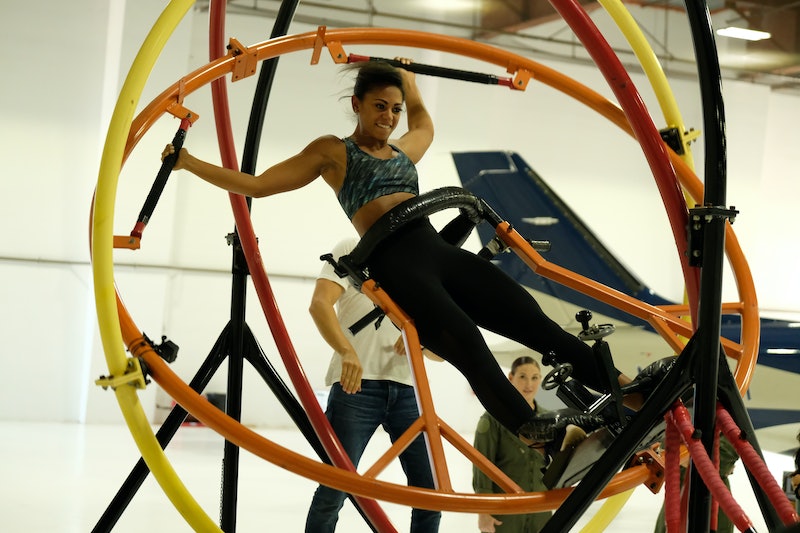 Pilot Pete has his pick of women — and, more specifically, his pick of flight attendants — on this season of The Bachelor. While three of Peter's 30 contestants have their careers listed as flight attendants, Shiann from The Bachelor also has experience working in the friendly skies. Shiann's profession in her Bachelor profile lists her as an administrative assistant, but her Instagram reveals the cold, hard, pressurized truth that she has worked as a flight attendant as well.

The three self-proclaimed flight attendants who are competing this season are Eunice, Jade, and Megan. Yet, not a single clue that Shiann (pronounced She-Ann, according to her Instagram) was once a flight attendant exists in the ABC-released materials. Sure, her bio includes such tidbits like that she used to be a competitive horseback rider and had a boyfriend lie about having a wife and kids. But there's no indication whatsoever of her own "secret life" of working as a flight attendant.

Thankfully though, it doesn't take much sleuthing to find out this fact since Shiann has less than 50 Instagram posts and the truth lies within there. In May 2017, Shiann posted that she had just become a flight attendant. A month later, she shared she was working for United Airlines in a post featuring her hanging in the overhead bin.

Besides the cute announcement making you wonder just how large those overhead bins actually are and how one would be able to crawl into them, these posts beg the question: Why would Shiann lie about being a flight attendant? Especially when she looked so darn happy posing in a plane's engine of all things.

Well, the most likely reason is because it doesn't seem like that's her career anymore. Her last reference on Instagram to working for an airline was in a post from February 2018, but that's where the (con)trail goes cold. She did tweet in January 2019 that she had a flight attendant roommate, but it seems her own time ensuring the safety and comfort of passengers has passed.

With such a heavy-handed theme of flying overtaking this season of The Bachelor due to Peter's profession (but bless, no "On the Wings of Love" subtitle), Shiann just may stand out more by not advertising her past career. Plus, plenty of contestants throughout Bachelor history have left out information about their former jobs. For instance, Vanessa Grimaldi never once discussed her career as an actor during Nick Viall's season and instead focused on how she was a special education teacher. And speaking of acting, Shiann also dabbled in the theatrical world in her pre-flight attendant days. She has a Backstage profile and used to tweet about acting classes and auditions.

Shiann, who tweets way more than she posts on Instagram, also has seemed to work as a server and at a dog spa and hotel (she tweeted once that she wanted to be a veterinarian). Now, the 27-year-old from Las Vegas is an administrative assistant and keeping her time breathing recycled air to herself. Maybe she'll let Pilot Peter in on her secret during The Bachelor, but perhaps their relationship will benefit from not being solely focused on their air connection.