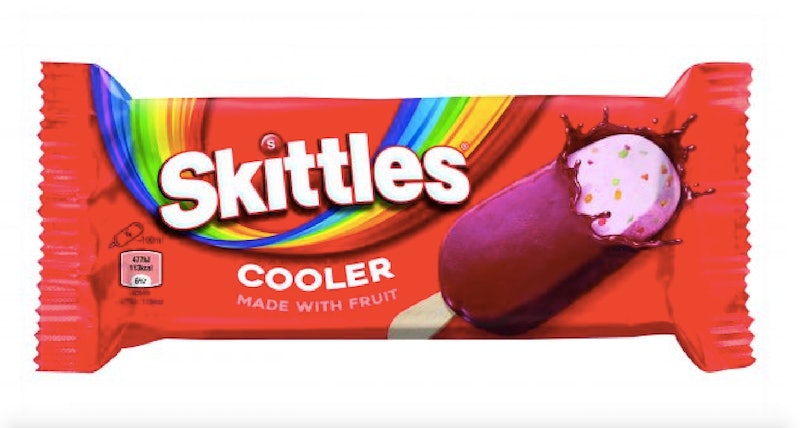 In 2019, if you want to taste the rainbow, you have an aggressive number of options at your disposal. Skittles sees your obsession with Skittles and has responded, time and time again, with Skittlevations and Skittleventions, so that you will never have to worry about walking this earth without a way to turn your tongue a funny color during your lunch break. This latest option may be the most delicious yet, though: Skittles Coolers, an ice cream version of Skittles, just joined the rainbow jamboree.

Per Talking Retail, the new product comes courtesy of Mars, and is a "wrapped, hand-held ice-cream stock" that "features fruity ice-cream with crunchy pieces covered in a strawberry sorbet." The first product image shows that it comes in popsicle form, but that "strawberry sorbet" bit appears to be a crunchy outer coating. Basically, Dilly Bars and Skittles just had a majestic little rainbow baby, which is approximately as '90s as a food can get in 2019.

There is a caveat here, because alas, when it comes to the good candy, there is always at least one. The Skittles Coolers are currently only available in the UK, where it will debut at the end of February. What that means is that Prince Harry, Meghan Markle, and their future progeny will be able to snack on this delightful treat, but the rest of us may have to wait it out stateside until someone from Mars decides that the U.S. is worthy of such Skittles decadence.

If you are also suffering from some major Skittles FOMO that is making you question our decision to revolt against the British empire right now, please know that although we are far away from the Skittles Coolers, we do have some pretty clutch options of our own. For instance, Skittles Darkside candies recently hit shelves again in January 2019, showing the "dark side of the rainbow," which includes Dark Berry, Black Cherry, Blood Orange, Midnight Lime, and a ~Forbidden Fruit~ flavor.

And just in case that doesn't quite cut it for those of us who want to live on the edge while we're eating our sweets, Skittles is also launching Zombie Skittles in 2019, reportedly around Halloween. These flavors will included Petrifying Citrus Punch, Mummified Melon, Boogeyman Blackberry, Chilling Black Cherry, Blood Red Berry, and — brace your entire human body — a flavor called Rotten Zombie. While I have zero context for what a rotten zombie would taste like, having not sampled one for myself, I am keeping an open mind, if not a slightly terrified heart.

Anyway, all this is to say that although we have plenty of reason to be jealous of Skittles fans in the UK right now, we have plenty of our own fun Skittles to keep us entertained. In the meantime, if you're craving some tart, nostalgia-inducing, candy-based ice cream, you can also score Sour Patch Kids ice cream at Walmart, because there is truly no limit to what humans will do to their favorite desserts. Here's to turning more candy into ice cream in 2019!