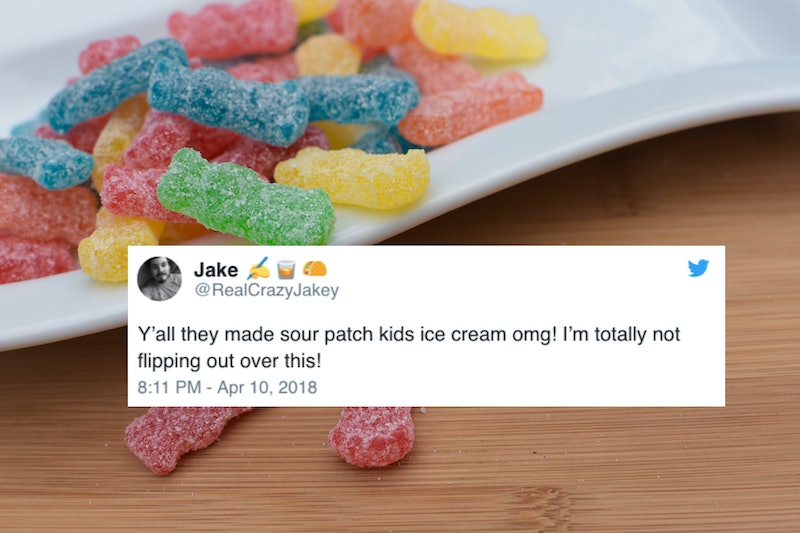 And today in Information I Don’t Really Know What To Do With, we have this: Sour Patch Kids ice cream exists, and according to several posts on social media, is currently being sold in Walmart locations. Personally, I don’t really know how I feel about it. On the one hand, I am super interested in weird food combinations; on the other, though, I… well, let’s just say that I’ve never considered Sour Patch Kids and ice cream to be items that were just waiting for someone to come along and combine them into one creamy yet sour dessert. But, I mean… it’s A Thing, so… there’s that.

Update: Bustle has confirmed that Sour Patch Kids Red, White, And Blue ice cream is available exclusively at Walmart; it retails for $3.48.

Earlier: Not a lot of information is currently available about this fascinating and somewhat horrifying-sounding treat; what little we know comes primarily from the Junk Food Mom Instagram account, which makes it its mission to acquire, photograph, and test as many snack and dessert foods as possible — both locally (the account’s bio says it’s based in Michigan) and globally (sometimes treats from far-flung places like Australia and China show up in its feed). According to Junk Food Mom’s post, the ice cream’s full title is Sour Patch Kids Red, White, and Blue Light Ice Cream and Sorbet; it consists of a combination of vanilla ice cream and lemon sorbet, all mixed together with a “redberry swirl” and pieces of blue Sour Patch Kids. According to Junk Food Mom's Instagram post, the “redberry swirl” is a sort of liquified red Sour Patch Kid concoction swirled through the ice cream that is sour enough to make you "pucker up"; meanwhile, the packaging in the images indicates that the blue Sour Patch Kids pieces are called “Bitz.” (Just, y’know, FYI.)

Both JunkFoodMom and several Twitter accounts have indicated that it's available at Walmart, although there doesn’t appear to be a listing for it on Walmart’s website yet; it’s also not known whether it’s a Walmart exclusive or if it will be available at other retailers. Either way, though, the Impulsive Buy confirms Walmart as at least one place where it can be found: Sour Patch Kids Red, White, and Blue appeared in a recent “Spotted On Shelves” post published on the foodie website, where it had been “spotted at Walmart” by someone credited as “Rachel C.” If you look carefully at the Impulsive Buy’s photo, you can also get an idea of what the treat tends to retail for; a price tag right at the bottom of the picture notes that “DE Sour Patch Kids” costs $3.49 at that particular store.

Update: Bustle has confirmed that Sour Patch Kids Red, White, And Blue ice cream is a Walmart exclusive, retailing for $3.48.

Earlier: Of course, the big question on everyone’s mind is this: What does it taste like? I won’t lie — my initial reaction to the idea of Sour Patch Kids and a dairy-based dessert joining forces is an emphatic “NO, THANK YOU,” mostly because that sounds like an excellent way to curdle a perfectly good bowl of ice cream to me. But according to Junk Food Mom, it’s … actually pretty good, if sour desserts are your thing.

“This stuff is amazing. If Sour is what you’re looking for, it’s here,” reads Junk Food Mom’s Instagram post. Apparently the combination of ice cream and sorbet “works great”; it has “a tart lemon flavor,” continues the review. What’s more, the “Blue Bitz are actual pieces of [Sour Patch] Kids”; they’re not all super sizeable, but Junk Food Mom found “a few half-sized pieces” scattered throughout. What really boosts the sour factor, however, seems to be the “redberry swirl”: “Yikes,” writes Junk Food Mom. “If you get a spoonful of it, I guarantee your face will pucker up.” The review concludes, “This may not be for everyone, but if you like sour sweets, you’ll love this.”

And for what it’s worth, although some people on the internet share my misgivings…

…Many folks are also Here For It:

Although this Twitter user also makes a good point:

So, y’know, maybe just bear that in mind before you go chomping down on those Blue Bitz.

Interestingly, this is actually not the first time we’ve seen Sour Patch Kids and ice cream come together in holy matrimony and/or an unholy alliance: In 2016, Baskin-Robbins debuted a limited edition ice cream flavor featuring the sweet-and-sour gummies. Called Sour Patch Kids Redberry Blast, this treat introduced the “redberry swirl” to the world; according to Us Magazine, the flavor was “made with a mix of red raspberry and marshmallow ice creams and swirled with a Redberry Sour Patch Kids ribbon.” If you were feeling super adventurous, you could order it as a two-scoop sundae, in which case it would include “extra marshmallow toppings, whipped cream and tons of Sour Patch Kids gummies, plus a cherry on top.” Presumably it was a hit — or at least popular enough to warrant the wide-scale release of a similar flavor.

Some folks on Twitter have noted that they were interested in trying Sour Patch Kids Red, White, And Blue but came up short when they visited their local Walmart in search of it; as such, it’s possible that your own nearest Walmart might not have it in stock. If you want to save yourself a potentially disappointing trip, you can always ring up the store ahead of time to ask if they’ve got it.