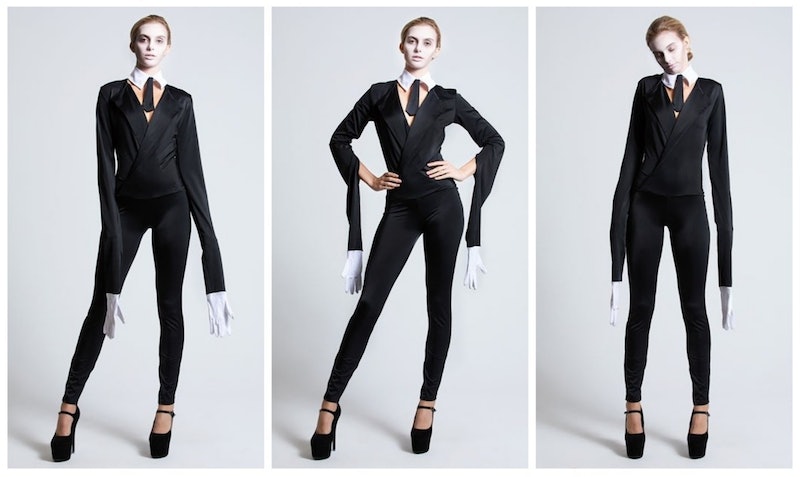 The coming of fall always heralds a very specific kind of warning. No, not the warning about the arrival of pumpkin spice season. No, not the one about holiday creep, either. I’m talking about the warning concerning Halloween costumes — namely, the warning not to dress up as something insensitive or culturally appropriative. So, in my capacity as one of Bustle’s resident spookpeople, I bring you a public service announcement: Just because there are a lot of Slender Man Halloween costumes out there doesn’t mean that it’s necessarily a good idea to dress up as the fictional character for Halloween.

When I say “there are a lot of Slender Man Halloween costumes out there,” I really do mean a lot. In recent years, we’ve seen an uptick in the number of Slender Man-inspired guises available at both online and brick-and-mortar retailers; what’s more, this trend is likely to continue in 2018 in light of the recently released horror film based on the character, Slender Man (and, yes, despite the fact that the movie was despised by critics and filmgoers alike). A Slender Man costume is easy enough to put together on your own — all you need is a black suit, a white mask, and maybe a pair of white gloves — but even so, you can find all manner of ready-made getups available.

And in many ways, it’s unsurprising that Slender Man costumes have become all the rage; even though he’s less than 10 years old, the character is proof positive of the power of the internet.

Slender Man first came into being in 2009 in a thread on the Something Awful forums called “Create Paranormal Images.” The thread was — as you might expect — devoted to creating paranormal images: Through some clever image manipulation, user after user dreamed up all manner of ghoulies, ghosties, and long-legged beasties. But of all of the fictional creatures that came about as the result of this thread, one in particular captured people’s imaginations in a big, big way: The Slender Man, presented by Something Awful user Victor Surge, real name Eric Knudsen. Other users subsequently added to the mythos — the beginnings of the formative Slender Man web series Marble Hornets can be found in that same thread — and within a surprisingly brief amount of time, Slender Man had become a full-fledged cultural phenomenon.

And, as is the case with virtually every cultural phenomenon, mass-produced Halloween costumes followed shortly behind.

Halloween allows us to do so much: For just one night, we can become someone or something other than who or what we are in our everyday lives. We have the freedom to try on different roles: To be sexy, or badass, or funny, or, yes, scary. We can confront the things that frighten us, sometimes by dressing up as those things. Within this context, all of these Slender Man costumes would be fine — another monster in the pantheon to scare and delight us during this spookiest time of year.

But there’s additional context to consider here, too — context which matters a great deal. All of this would be fine… if it were not for the fact that Slender Man factored prominently in a horrific incident that took place in Waukesha, Wis. just a few years ago.

On May 31, 2014, Morgan Geyser and Anissa Weier, both 12 years old at the time, stabbed Payton Leutner, also 12, 19 times during a game of hide-and-seek the girls were playing in a Waukesha forest. Leutner was found by a cyclist and rushed to the hospital; she survived after a lengthy recovery period.

Geyser and Weier later claimed they had committed the crime to prove their loyalty to Slender Man, whom they believed was real, and to prevent him from harming them or their families.

According to ABC News, Geyser pleaded guilty to attempted first-degree intentional homicide, party to a crime in 2017; she later entered a plea deal in which Judge Michael Bohren found her not guilty by reason of mental disease or defect, thereby avoiding further jail time and committing Geyser to a mental health facility, reported CNN. In February of 2018, she was sentenced to 40 years in such a facility.

Weier pleaded guilty to second-degree attempted intentional homicide, party to a crime, and was found by a jury to be not guilty by reason of mental disease or defect. She was sentenced to 25 years under state mental care, including at least three years in a mental health facility before being eligible to petition for release, according to CNN.

That’s the additional context. And that’s why it might be worth reconsidering dressing up as Slender Man for Halloween right now.

Or dressing up your child as Slender Man this year.

This is not to say that reading or watching media about Slender Man is bad, or that stories featuring the character shouldn’t be created anymore, or that people who enjoy horror are weird or dangerous, or that the mere exposure to Slender Man causes people to do terrible things. Believe me — that’s not at all what we’re talking about here. And I say that as someone who is into horror, and who has spent a lot of time with Slender Man-related media, both personally and professionally.

This isn’t about creating a moral panic.

But it is about the very real and recent pain that a real-life incident involving the character created for real people and a real community. And it’s about being sensitive to that pain — especially when those affected by it have already spoken out about it.

Many residents of the Waukesha area expressed shock and rage when Slender Man costumes popped up at some retailers during the 2014 Halloween season — mere months after the stabbing. Those who opposed the sale of the costumes cited it as “insensitive” and “in poor taste,” particularly so soon after the tragedy occurred. Indeed, many retailers in and around Waukesha ultimately decided to stop carrying Slender Man costumes; as one employee of such a retailer put it to ABC News, “We don’t mind scary, but we try not to be sick.”

Only four years have passed since then; what’s more, the sentences were just handed down a few month ago. It’s still fresh in everyone’s minds — and, indeed, is likely even fresher than usual, given the recent activity in the case. It would be in poor taste to dress up as Slender Man. It’s too soon. The hurt is too raw. And the pain real people feel matters.

Horror doesn’t have to be exploitative. Indeed, at it’s best, it’s far from exploitative; rather, it can help us cope with a frequently horrifying world.

And our world is plenty horrifying without us making it even more so.