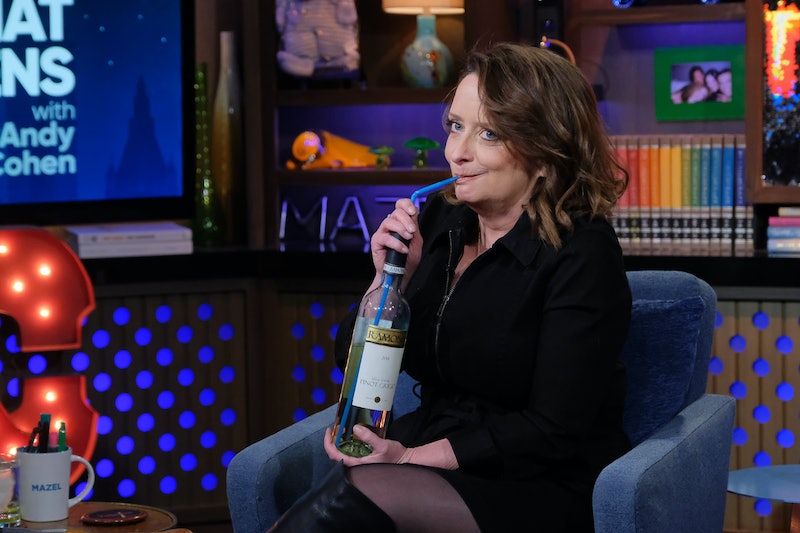 The coronavirus has been on everyone's mind lately, so of course Rachel Dratch's iconically pessimistic Debbie Downer made a surprise SNL cameo to voice the anxieties that many people are feeling right now. In the skit, Dratch appears as a paranoid wedding guest, bringing up loaded topics like COVID-19 and Trump, the #MeToo movement, and the declining honey bee population.

The skit featured Daniel Craig, Kenan Thompson, Melissa Villaseñor, and Aidy Bryant as cheerful wedding guests, whose light conversations are interrupted by Dratch's Debbie Downer showing up in a full gas mask. Dratch attempts to eat a bread roll with the mask on, and only removes it when Bryant tells her, "Don't worry, none of us are sick, we're just a little tipsy."

"Well unfortunately with COVID-19, you can display no symptoms and still be wildly contagious," Dratch delivers in Debbie's usual negative and blunt manner. "Hi, I'm Debbie."

Debbie Downer was created by Dratch and debuted in 2004 on Saturday Night Live. Her whole shtick is to weigh down happy social gatherings by bypassing polite conversation to talk about uncomfortable (but also often important) topics, to the discomfort of those around her. So naturally the first thing she brings up in her cameo is all the concerns about coronavirus.

"That's a pretty elaborate mask," Craig's character begins, to which Dratch responds that she bought one of the last N95 masks on Amazon.

"They say to forego masks, but good luck nabbing one when we're facing a worldwide pandemic," Dratch says to sad, cartoonish trombone sounds.

Craig suggests that Dratch's Debbie loosen up with some alcohol, but Dratch flatly refuses to partake. "I don't wanna drink too much. Last time I drank, I was almost MeToo-ed," she explains, describing how a former date got too handsy when she began to choke on a salad crouton.

"Question, do we have to stay at our assigned tables?" Craig asks his table mates in desperation. Dratch does wander off briefly to greet the bride and groom, but when she returns the first topic she broaches is their opinions on Trump, to the distress of everyone seated around her. (Villaseñor's character amusingly shatters a glass in stress.)

The sketch ends with Debbie catching the bouquet. "You know who else loves flowers?" Dratch says. "Honey bees. Too bad they're on their way out."

Debbie Downer is obviously a negative worrywart, but her inability to keep her pessimism under control clearly struck a chord with viewers who feel the same sentiment towards COVID-19, and the year 2020 as a whole.

Though Debbie often represents that cringeworthy guest that no one wants to be around, there's something to be said about venting versus bottling up feelings. Now more than ever does it feel important that we talk openly about issues, as it's true that there are a lot of upsetting things going on right now that need solutions, from the elections, to climate change, to healthcare concerns. Though Debbie is a throwback character, she obviously speaks to many of the anxieties that the younger generations have about the future. Dratch's cameo is a humorous reminder that perhaps it's time to normalize holding those difficult but important conversations with our family, friends, and peers, and in turn risk being, well, a Debbie Downer.

More like this
Pedro Pascal Barely Got Through The "Lisa From Temecula" 'SNL' Sketch
By Stephanie Topacio Long
Michael B. Jordan Tackled His "Public Breakup" With Lori Harvey On 'SNL'
By Brad Witter
Who Is Pete Davidson Dating? He & Chase Sui Wonders Got Caught Kissing
By Jake Viswanath
Wait, Is Barney Stinson Related To Sophie On 'HIMYF'?
By Gretchen Smail
Get Even More From Bustle — Sign Up For The Newsletter
From hair trends to relationship advice, our daily newsletter has everything you need to sound like a person who’s on TikTok, even if you aren’t.