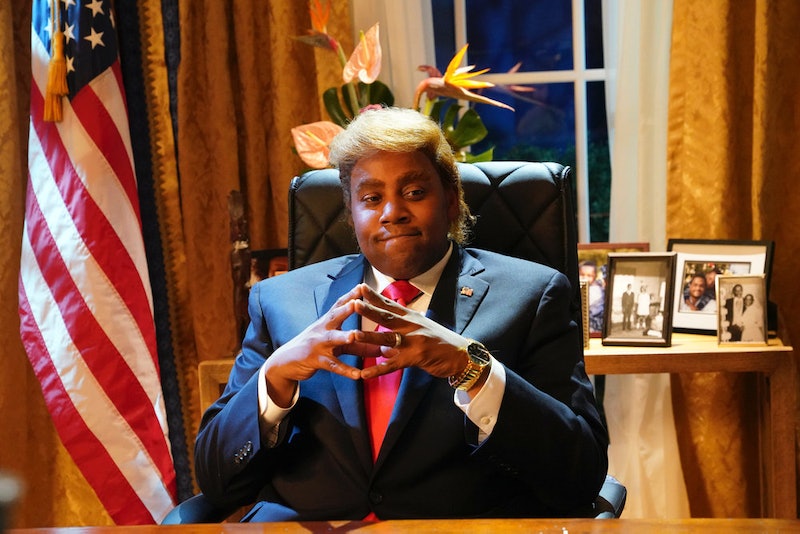 While fans can always count on Saturday Night Live to feature politically-tinged comedy during the show's cold open or during Weekend Update, the show has snuck in a few extra digs at the country's political world in new, surprising ways. One political sketch in particular during the December 9 episode struck a chord with tie SNL audience, with some fans tweeting that SNL's Empire-inspired Them Trumps sketch was one of the best sketches of the evening. And maybe even better than Empire itself.

The sketch imagines a television show that combines the soap-opera world of Empire, which focuses on the powerful Lyon family as they attempt to control Empire Entertainment. This power dynamic is placed upon the Trump family, in a show that advertises itself as daring to ask the question "What if Donald Trump was black?" The Them Trumps trailer reimagines Donald Trump as Darius Trump (played by Kenan Thompson), First Lady Melania Trump is now First Lady Malika Trump (played by Leslie Jones), and Daruis' children Darius Trump Jr. (played by Chris Redd) and L'evanka Trump (played by Ego Nwodim).

While some things in the world of the Trumps transcends race — namely, that Darius is still worried about Russia — there are some key differences. Instead of an alleged affair with Stormy Daniels, Darius is accused of covering up an affair with a stripper named Cinnamon Mercedes from Atlanta's famous Magic City strip club. Instead of peddling Trump Steaks, Darius sells Trump Country Ham. Most notable, in the middle of a speech that would make Lucious Lyon proud, Darius Trump is arrested by the FBI.

While it take Lucious Lyon a full season to get to prison in Empire, it's only a few minutes into the trailer for Them Trumps before Darius Trump is arrested, ending the episode. However, Them Trumps skips over the opportunity to have Darius Trumps spend time in prison to record his own version of "Snitch Bitch," the "next time on..." tag that ends the sketch shows Darius Trump returning to his family and announcing that "there's only one rule in America. You can't prosecute a sitting president. It's called Checks and Balances, baby." However, his celebration is once again cut short when he learns that he's being impeached, to which Darius claims that he "was waitin' on that."

The sketch gets some good laughs in, but also appears to be speaking to a larger point about race and power. Simply, that the lengths that America seems to let white, wealthy people stretch the law when doing things that are morally reprehensible are far greater than how much benefit of the doubt is allowed to African-Americans. As Michael Che pointed out during Weekend Update, Kevin Hart stepped down from hosting the Oscars due to homophobic tweets, but that same ceremony nominated Mel Gibson for Best Director just a few years ago.

While the real investigation into Donald Trump seems to be coming to an end, Them Trumps suggests that the investigation would've gone a lot quicker had Donald been Darius. In a time where it seems that SNL is dominated by political material, Them Trumps stands out for not just poking fun at current events, but also providing some legitimate commentary on the state of America.