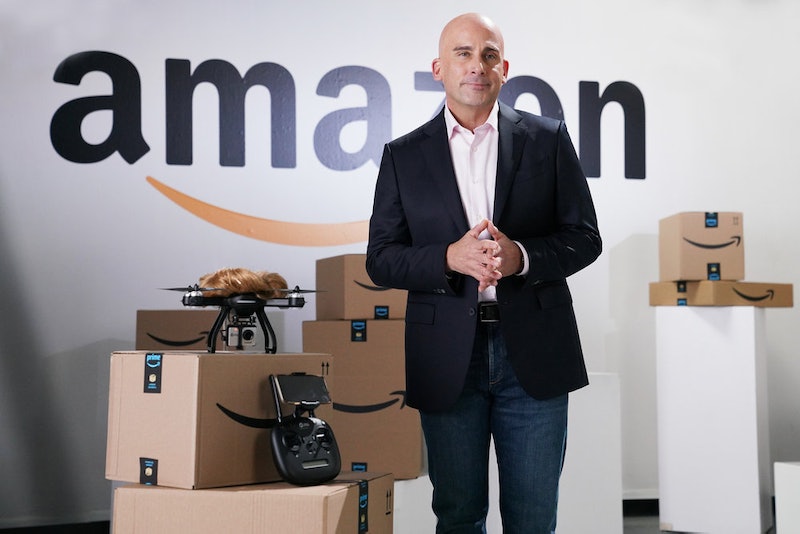 If there truly are a finite amount of ways to make fun of President Trump, Saturday Night Live is searching for all of them. The November 17 episode of the sketch comedy series used one of the week's most popular news stories that was seemingly unrelated to Trump, and turned things right around by having Steve Carell dress as Jeff Bezos and insult Donald Trump on SNL.

There was no bigger news in the city of New York this past week than the announcement that Amazon would be building a secondary headquarters in the borough of Queens. Despite having a whole fake commercial dedicated to the announcement, the ad didn't touch on any possible effects that Amazon HQ2 would have on Queens, didn't mention any of Amazon's recent controversies, nor did they use the sketch to satirize Amazon's hyper-wealthy CEO Jeff Bezos.

SNL got out a variety of jokes at the expense of both Amazon and Queens during the Weekend Update segment of the show, but the show's fake Amazon commercial had its targets set clearly on Donald Trump, but lobbing taunts about Jeff Bezos having "a hundred times" money than the President, and claiming that Donald Trump's book, The Art Of The Deal, is the only book the have "four Chapter 11's," although according to The Washington Post, Trump has actually filed for bankruptcy six times.

The ad wastes little time pointing out that the two locations of Amazon's new headquarters, Queens, New York and Arlington, Virginia, correspond to two of the most important locations in Donald Trump's life. Trump was born in Queens, and currently resides in The White House near Arlington, Virginia, and the fake Amazon commercial imagines a Jeff Bezos who is willing to place more important Amazon locations in Trump-adjacent locations, such as Mar-A-Largo. Bezos than points out that he owns the Trump-critical magazine The Washington Post, announces a new service called Amazon Caravan, and outfits every Amazon drone with a wig that looks just like Donald Trump's hair.

SNL's Bezos also has framed pictures of him posing with Trump associates Kanye West, Kim Jong-Un, and Vladimir Putin. He also has a framed picture of beloved video game character Toad, but that doesn't mean Bezos is a fan of great and wholesome games such as Mario Kart and Captain Toad's Treasure Tracker that feature the vested scamp. It's most likely a reference to Stormy Daniels' tell-all book which mentioned Trump's genitals, yet another of many digs littered throughout the ad.

SNL has come a long way from the days when Donald Trump was hosting an episode, finding ways to mock him in nearly every weekly story that pops up the week before an episode premieres. SNL is using Jeff Bezos to insult Donald Trump — but it wouldn't be surprising for SNL to go from using Jeff Bezos as an anti-Trump personality to crafting pointed satire in his direction, as he is the richest man in the world and arguably just as powerful than Donald Trump, if not more so. For the time being, however, Jeff Bezos is not in SNL's line of sight for satirical targets, and Donald Trump very much is, even when a news story in question isn't about him.