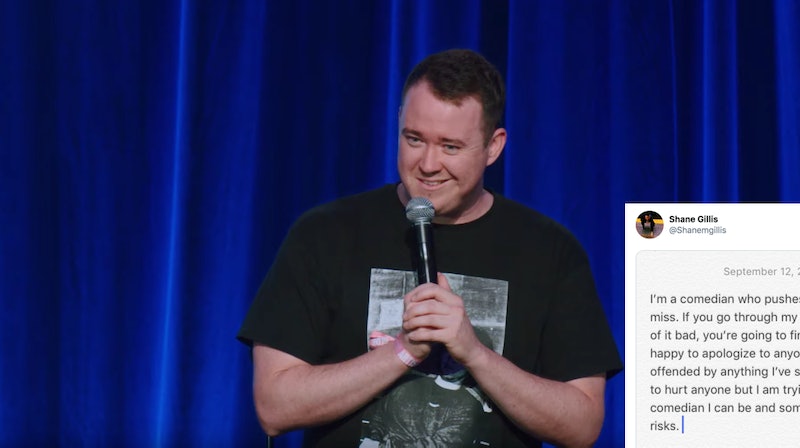 Shortly after Saturday Night Live announced the addition of three new cast members on Sep. 12, racist and homophobic comments made by one of the new additions came to light. In response to the scandal, SNL's Shane Gillis apologized for his comments by releasing a statement on Twitter, but the response from social media hasn't been particularly supportive. Bustle reached out to Gillis' management and Saturday Night Live for comment, but did not receive an immediate response.

Update: Shane Gillis has been fired from SNL, according to a statement from an SNL spokesperson on behalf of Lorne Michaels, obtained by Bustle on Sept. 16. "After talking with Shane Gillis, we have decided that he will not be joining SNL. We want SNL to have a variety o voices and points of view within the show, and we hired Shane on the strength of his talent as comedian and his impressive audition for SNL. We were not aware of his prior remarks that have surfaced over the past few days. The language he used is offensive, hurtful and unacceptable. We are sorry that we did not see these clips earlier, and that our vetting process was not up to our standard."

Gillis responded to the news in a separate Tweet, writing, "It feels ridiculous for comedians to be making serious public statements but here we are. I'm a comedian who was funny enough to get SNL. That can't be taken away. Of course I wanted an opportunity to prove myself at SNL, but I understand it would be too much of a distraction. I respect the decision they made. I'm honestly grateful for the opportunity. I was always a mad tv guy anyway."

Earlier: Gillis was announced as one of three new Featured Players joining the legendary late night sketch show on Thursday, along with improviser Chloe Fineman and Bowen Yang, the show's first East Asian American cast member. However, the celebratory nature of Bowen's casting was marred by videos of Gillis making racist comments against Asians on his podcast, Matt and Shane’s Secret Podcast, were shared on social media. In the clip, reportedly from 2018 and shared by journalist Seth Simons, Gillis uses a racial slur to refer to Chinese people, and jokes about being annoyed by Asian immigrants learning English — a comment he calls "good racism." He also makes fun of Chinese accents and ranks different Asian ethnicities on how "racist" they are with his co-host, Matt McCuster. As noted by @geminina on Twitter, McCuster and Gillis made more racist remarks in a more recent podcast, published on Aug. 26, once again putting on mocking accents.

After the videos inspired a backlash against Gillis on social media, the stand-up responded with a statement on Twitter later that night. "I’m a comedian who pushes boundaries. I sometimes miss," Gillis wrote in his apology statement. "If you go through my 10 years of comedy, most of it bad, you’re going to find a lot of bad misses. I’m happy to apologize to anyone who’s actually offended by anything I’ve said. My intention is never to hurt anyone but I am trying to be the best comedian I can be and sometimes that requires risks."

Despite Gillis' statement, social media users didn't seem to be particularly interested in his apology, with many noting that there's a difference between "pushing boundaries" and making racist and homophobic remarks. "'I guess I'm sorry if you're offended because I'm a RISK TAKER' is, sweet Lord above, the absolute lamest possible non-apology ffs," journalist Mo Ryan tweeted in response to Gillis' post.

"Nothing in comedy is less risky than this shtick," NPR critic and author Linda Holmes wrote. "This shtick is the passbook savings account of comedy, because you don't have to be funny. You'll break even for a time just by being an avatar for people who wish they could say whatever they wanted without consequences." Vulture writer E. Alex Jung weighed in on the frustrations of the Asian American community seeing Gillis cast alongside Yang on SNL — something actor Daniel Dae Kim also touched on — and noted that unlike many other instances where comedians' controversial tweets had resurfaced, Gillis had made those comments as recently as eight months ago.

"Surprise! Shane Gillis' racist video isn't something from 'the past' that 'resurfaced' but a history," Jung wrote on Twitter. "SNL was either willfully ignorant or deliberately malicious by hiring someone who you could expose with......google." In addition to those who criticized Gillis' statement, many more Twitter users called for the comedian to be fired from Saturday Night Live before the Season 45 premiere on Sep. 28.

According to The Daily Beast, Gillis' racist comments — clips of which were removed from YouTube shortly after Gillis' casting was announced, as reported by Vulture — are far from the only controversial comments that he has made in recent years. In a 2018 interview with PhiladelphiaNeighborhoods.com, Gillis defended Louis C.K., who admitted to sexual misconduct two years ago. In a 2016 interview, Gillis talked about trying to "find the line," in comedy, and stated that "you can be racist to Asians. That’s what we’re finding out."

While it remains to be seen how SNL will respond to the scandal surrounding Gillis and his comments, it's clear that many people do not agree with his assessment that racism is just a part of "comedy" and "pushing boundaries." There are plenty of interesting, innovative ways to push boundaries in comedy, and many comedians who are doing unexpected work without having to resort to slurs and racism. Not to mention, casting Gillis alongside Yang is an insult to progress, and offers legitimacy to the idea that racist and homophobic comments is acceptable under the guise of being "jokes." If Gillis does remain on SNL, it's hard to tell how the show will move forward.

This article was originally published on Sep. 13, 2019