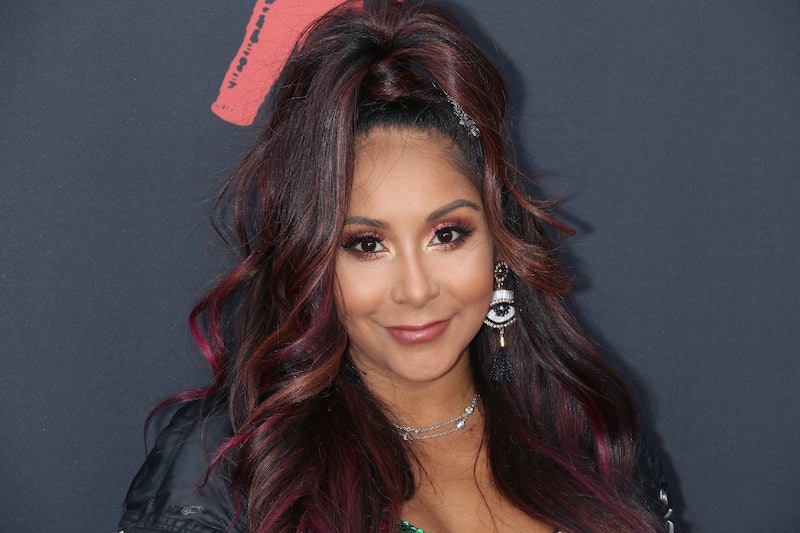 It's an understatement to say that a lot has changed in the lives of Snooki, Pauly D, JWoww, Ronnie, Vinny, and the Situation since they first rose to fame on the original Jersey Shore in 2009. But what might highlight that fact the most is that Snooki is officially retiring from the reality franchise. The star, full name Nicole "Snooki" Polizzi, announced her decision to leave on her podcast It's Happening with Snooki & Joey on Dec. 6, as reported by People.

Ahead of a potential Season 4 of MTV's revival, Jersey Shore: Family Vacation, the reality star announced she wouldn't return if it got picked up. "I love you so much and don't hate me for my decision," she said on her podcast, which she co-hosts with her BFF, makeup artist Joey Camasta. "But I have to do what's best for me at the moment and I am retiring from Jersey Shore." As for why she's making this drastic change, her decision is all about her kids. "There's a lot of reasons why, but the main reason is really ... I just can't do it anymore. Literally, leaving my kids to film it is really, really hard on me," she added.

Snooki and her husband, Jionni LaValle, have three children — 7-year-old Lorenzo, 5-year-old Giovanna, and six-month-old Angelo. With Family Vacation, which has been on for three seasons, filming in locations like Miami, Los Angeles, and Las Vegas, along with Jersey spots, Snooki admitted that she has tried to quit the show before because it takes her away from her kids.

"I quit every time we film because I just hate being away from the kids," Snooki said. "I don't like partying three days in a row. It's just not my life anymore. I want to be home with the kids."

In addition to not wanting to be away from her kids, Snooki admitted she's no longer comfortable with the direction the show has been going in. "When I leave my kids and I film the show, I want to have a good time, and I'm putting myself out there, and I just want to come off as a good person," she said. "And lately on the show, it's just been very drama."

She said she feels Jersey Shore has become less about having fun and is focusing on pitting the stars against one another. She even claimed she has received death threats directed at her children and threats against her store, The Snooki Shop, which is located in New Jersey, because of the tension between cast mates, as promoted by the show. "I'm not leaving my kids days on end to film this show when that's the result of it," she said. "I don't like the person that I'm being portrayed as."

Despite any on-screen drama, Snooki insisted that she still loves her "roomies" — Paul D. DelVecchio (DJ Pauly D), Mike "The Situation" Sorrentino, Ronnie Ortiz-Magro, Jenni "JWoww" Farley, Vinny Guadagnino, Deena Cortese, and Angelina Larangeira — and she considers them to be her family.

After the news of Snooki's retirement broke, JWoww posted a photo of her and Snooki hugging on her Instagram Story with the words, "Til the end... #rideordie." Snooki also shared JWoww's post on her Story.

Even though she's leaving the show that made her famous, Snooki added she isn't done with reality TV. Plus, fans will still get to see her when the second half of Jersey Shore Family Vacation Season 3 airs in 2020. But if the show returns for a fourth season, it will sadly be Snooki-free.

More like this
RHOP’s Robyn Dixon Explained Why Juan Paid For Another Woman's Hotel Room
By Brad Witter
Erika Jayne's Estranged Husband Tom Girardi Has Been Indicted On Fraud Charges
By Jake Viswanath
'RHOSLC' Star Jen Shah Refuses To Do A Post-Sentencing Interview With Andy Cohen
By Brad Witter and Jake Viswanath
'RHOSLC’s Heather & Whitney Are Still On A “Friendship Break” After Season 3 Reunion
By Jake Viswanath
Get Even More From Bustle — Sign Up For The Newsletter
From hair trends to relationship advice, our daily newsletter has everything you need to sound like a person who’s on TikTok, even if you aren’t.