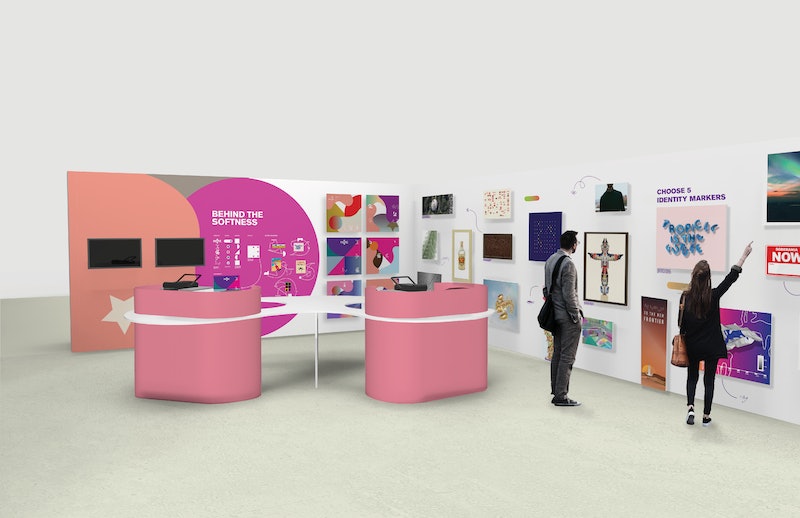 What does your national identity look like to you? That’s the question that Muuaaa, a multidisciplinary design and branding studio based in San Juan, Puerto Rico, grappled with in designing their new show at this year’s London Design Biennale. The London Design Biennale is an international design festival running from Sept. 4 through Sept. 23, 2018. This year’s theme is “Emotional States,” featuring exhibits by designers and curators from 40 countries, cities, and territories.

Muuaaa’s interactive installation, Soft Identity Makers, lets visitors create a unique national identifier like a flag, passport, or coat-of-arms that can be turned into T-shirts, bandanas, and cards. Visitors can choose up to five “identity markers” that best represent them from a wall of 45 images the firm designed. The selections are then generated into a graphically designed result by a Muuaaa team member.

The festival first approached the studio with the idea of what helps people create their “contemporary identities.” Discussion of topics like Brexit, DACA, and the immigration experience led the studio to think about “what happens with those people when they immigrate and assume that their new country [doesn’t] represent them nationally,” Celina Nogueras Cuevas, the studio’s co-founder and chief creative strategist, tells Bustle. “That's when we came up with the idea of giving hope to people that are in this particular situation: [...] creating what we call self-identities.”

It’s a particularly salient notion, considering how Muuaaa drew inspiration from Puerto Rico, where the island's status as a U.S. territory provokes plenty of political and socio-cultural commentary on identity, especially in the wake of Hurricane Maria.

“National identity doesn't have to be based on what nation you're in, or what physical state you're in. It becomes more how you have lived life,” says Muuaaa co-founder and chief design officer Miguel Miranda Montes. “You start to understand that feeling and a national identity is more about the layers behind what defines you." Those layers are "pure emotions," Miranda Montes says.

The firm tried to capture these emotions and turn them into the symbols they call “identity markers.” The concept of turning these identity markers into T-shirts was inspired by another historical tie to Puerto Rico: the fact that T-shirts rose in popularity as early as 1898, as a standard-issue garment for U.S. Navy to wear in tropical heat during the Spanish-American war.

The national response and clean-up efforts throughout and after the natural disaster raised questions for Miranda Montes and Nogueras Cuevas about what constitutes belonging to a country. Some critics said that Puerto Rico’s political status as a U.S. territory contributed to the federal government’s slow response to the disaster. “After Maria, we [...] tried to develop the concept more, and realized that identity shouldn't be a national identity,” says Miranda Montes. “It shouldn't be about the sense you are not of the nation that you were born in, it really is related to you. [Self-identity is] more about experiences and where you have been and where you want to go."

Nogueras Cuevas and Miranda Montes affirmed that throughout what was an “emotional” period for them, they believe that Puerto Rico’s cultural identity became even stronger for them. When a disaster happens, Nogueras Cuevas says, "people tend to bounce back, be resilient, and [...] they feel more connected to their people."