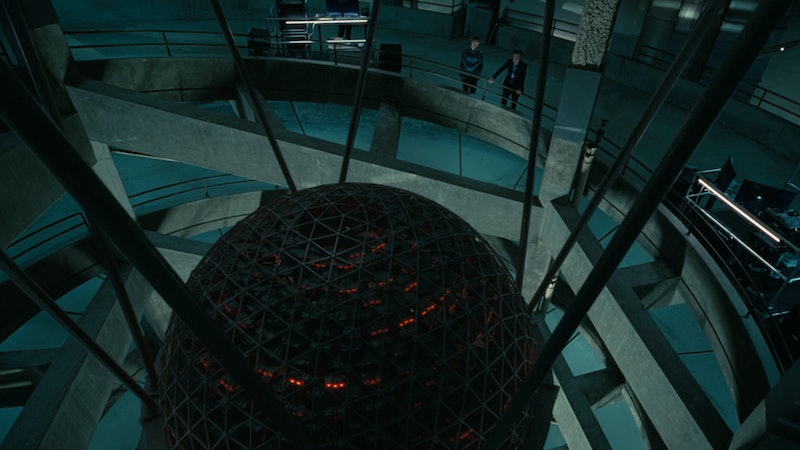 Spoilers ahead for Episode 7 of Westworld Season 3. Who's really in control? That's the question Westworld's third season has been asking — but what if the real force to be reckoned with is one nobody saw coming? It turns out that not Solomon, not Rehoboam, is the one with a plan, and now Dolores has unleashed that plan upon the world. But what is Solomon's plan? And where did this second machine come from?

Episode 5 of this season, "Genre," explored the backstory of Incite founder Engerraud Serac and his creation of Rehoboam, the machine that controls all of humanity. Rehoboam is apparently just the latest and most successful in a line of machines that were all named after ancient kings of Israel, including Saul, David, and Solomon. Until now, it was unknown what happened to the iterations of the machines before Rehoboam. But now viewers know that at least one of Rehoboam's predecessors survived: it was shipped off to the same warehouse where Serac keeps society's "outliers" and left to rust.

Dolores was able to track its location thanks to the protein she'd injected into William's blood before having him committed to the Incite-run institution, Inner Journeys. When the Inner Journeys staff sent William's blood to the warehouse to be analyzed, Dolores was able to follow it to Mexico, where she and Caleb discovered Solomon waiting to be activated. (When it was activated, it resulted in both Dolores and Maeve being shut down mid-fight, but don't worry too much about them; it's doubtful that Solomon just killed all hosts with the flick of one switch.)

It turns out that Solomon has a plan for humanity, one which was never implemented. And while the episode doesn't reveal what that plan is, perhaps the better question is why Serac shut Solomon down in the first place rather than enact its plan. The reason given in the episode is that Solomon contained too much of Serac's brother, Jean Mi — and, more specifically, Jean Mi's mental illness, which purportedly caused Solomon to behave erratically.

But the Solomon that Dolores and Caleb meet in Episode 7, "Passed Pawn," doesn't seem all that unstable. What if there was more behind Serac's decision to abort the machine's plan? What if Solomon came up with a plan that Serac didn't agree with, and Serac unplugged the machine and created a replacement rather than see that plan executed?

The names of Solomon and Rehoboam could be a clue to explain Serac's actions. While Wise King Solomon presided over a long period of peace in the united kingdoms of Israel and Judah, his son and successor Rehoboam was responsible for the dissolution of that empire, retaining only control over the Kingdom of Judah, while the Kingdom of Israel became its own independent country.

If we assume that this choice of names is not coincidental but rather purposeful, then we can draw parallels to events within Westworld. Solomon presided over two warring kingdoms; Rehoboam divided them. Perhaps Solomon was actually successful at finding a way for humans and hosts to live alongside one another, but Serac, who was more concerned with the dominance of humanity than peace with machines, retired that machine and built Rehoboam instead, choosing to divide and conquer rather than reign over a united kingdom.

If so, then by reactivating Solomon and implementing its plan, Dolores may be seeking a way for humans and hosts to live alongside one another. Of course, such a turn of events would be in direct conflict with Rehoboam's own programming… which means Season 3 could end with a war between two all-powerful machines over the fate of the world. In a story that's often been about metaphorical children rebelling against their parents/creators, it would be satisfying — and a twist on the traditional Westworld narrative — to see the forebear put down its unruly, violent offspring for once.