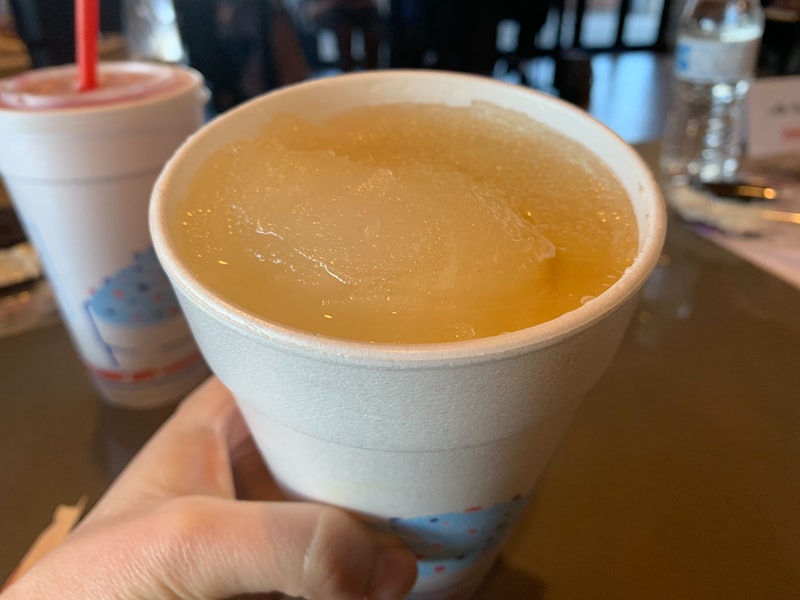 There are some things in life you've just got to take a leap of faith on, and Sonic has proven time and time again that they will catch you when you do. If you were among the humans who raised a skeptical brow at last summer's Pickle Juice Slush at Sonic last year and then deeply enjoyed it, prepare for another unusual combo that's about to win you over: Sonic is launching two Red Bull Slushes in April. And if you're a devotee of all things cherry at Sonic, you'll be delighted to know that one of those flavors will aggressively your speed.

First, what you need to know: The slushes are a limited time offer, and will be available starting on April 29, when they will retail between $2.99 and $4.99 through June. Second, and more importantly, the two flavors include a Red Bull Slush and a Cherry Limeade Red Bull Slush, giving you plenty of options to get your Red Bull on slush-style this spring.

I had the opportunity to try the new drink offerings ahead of their official menu launch. As someone who's not super well-versed in Red Bull-land (my idea of a wild morning is putting two tea bags in my hot water instead of one), I didn't expect to especially love the Red Bull Slush, but the flavor actually paired nicely with Sonic's base Slush — and legit did taste like Red Bull. I have to say, though, the the main event is definitely the Cherry Limeade Red Bull Slush, which pays homage to the Cherry Slush you already know, love, and have demanded the driver of your road trip pull over for too many times to count.

Here's the Red Bull Slush, in all of its high energy glory.

And here is its fraternal twin, the Cherry Limeade Red Bull Slush, which doubles as a delicious way to turn your tongue bright cherry red in the middle of your workday.

Granted, though these aren't around until April 29, you still have plenty of reasons to get to Sonic, stat — in fact, I'd argue the two best reasons you've got are the relaunch of Sonic's Real Ice Cream Cookie Sandwiches, which come in an Oreo and Nestlé Toll House Chocolate Chip Cookie form. Each sandwich features two cookies nestled around a glorious filling of real vanilla ice cream, which I can also confirm with my own taste buds makes for a beautiful marriage of desserts no matter which form of ice cream cookie sandwich you choose. Those are available for a limited time and will see a wide release on April 1, which is, conveniently, right around the corner.

The chain has plenty of other delicious things in the works, so keep your eyes peeled for more dessert and burger innovations as summer gets closer — 'tis officially the season for driving out to get your food instead of holing up from the cold and hoping someone else brings it to you. Live your slush-filled, summer dreams!

More like this
On TikTok, Tinned Fish Date Night Is The Latest Viral Food Obsession
By Emma Carey
10 Pumpkin Recipes That Are Way More Creative Than Pie & Lattes
By Rebecca Deczynski and Alexis Morillo
8 Completely Unserious Tips To Make Your Cuffing Season A Success
By Ginny Hogan
Here’s Your Daily Horoscope For September 27, 2022
By Mecca Woods
Get Even More From Bustle — Sign Up For The Newsletter