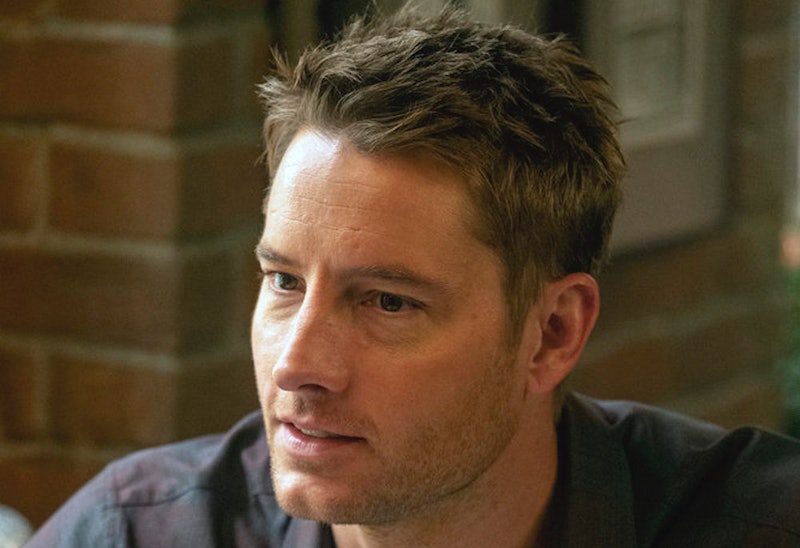 Spoilers ahead for This Is Us Season 4, Episode 10. Just when you think a door is closed on This Is Us, it opens back up. It's been almost a year since fans have seen Kevin's ex-wife on the show, but now Sophie called Kevin on This Is Us. The call is even more notable because it came right after Kevin declared that maybe he was never going to have the grand love story that his parents had. Then, cue phone ring.

Viewers didn't get to see Kevin's reaction to the phone call, because just seconds earlier he'd handed the device to a production assistant so he could go film a scene on his movie. But given how much Kevin wants a storybook love and how his feelings for Sophie don't seem to have really gone away, he'll likely be thrilled that his high school love is reaching back out to him.

Of course, Sophie may not have called for romantic reasons. Last viewers saw her, she was engaged to a man named Grant who proposed after six months and liked Billy Joel a lot. For all intents and purposes, she seemed happy. But, during that reunion, Kevin told her that he was about to give up having children to be with Zoe, so maybe Sophie didn't consider it an option that Kevin would be available for dating again. Maybe she's only just now heard that Kevin and Zoe broke up — and perhaps her own quick engagement failed — and she's looking for comfort in the familiar with Kevin.

Right before he gave the producer his phone, Kevin said, "I'm so desperate to have this crazy love story like what my parents had, but maybe it's just not in the cards for me." Jack and Rebecca did a real disservice to their kids by not being more honest about the struggles of the start of their relationship. Kevin wants the rom-com relationship he thinks his parents had. But they had to work for their relationship and it wasn't always easy — as we see now in flashbacks.

Kevin thinks he's just going to lock eyes with Sophia Bush in a cafe, take her to a private John Legend concert, and fall in love forever. He's so focused on that whirlwind romance of it all that he has never put in the real day-to-day effort. As Rebecca's mom told her in a flashback, true love is not always about the flashy moments, it's also about the small everyday acts that show you care about your partner. Sophie probably got big romantic gesture Kevin when he proposed as a teenager, but she deserved small-daily-action Kevin, too.

However it unfolds with what Sophie had to say on the phone call, Kevin does eventually find his grand love story, either with her or someone else. Is anyone surprised? As Sophie told him during her last meetup, "Decide what you want. You always get it." And he does. Flash-forwards have shown us that Kevin gets engaged and has a child not long from now. It's around January on the This Is Us timeline right now, and one of the flash-forwards shows that he's engaged and his fiancée is pregnant by August. That quick timeline would make sense if his fiancée was Sophie. They've already laid the groundwork for their relationship years ago. They've already been married. They don't need a long second engagement.

The bumps along the way of Sophie and Kevin's relationship help make it the great love story he wants. His parents didn't have the most perfect start to their love story, either, but it all worked out in the end. Perhaps that's how it will be for Sophie and Kevin as well, now that they've maybe finally got their timing right — minus the couple of hours it would have taken for Kevin to finish on set, get his phone back and return her call.