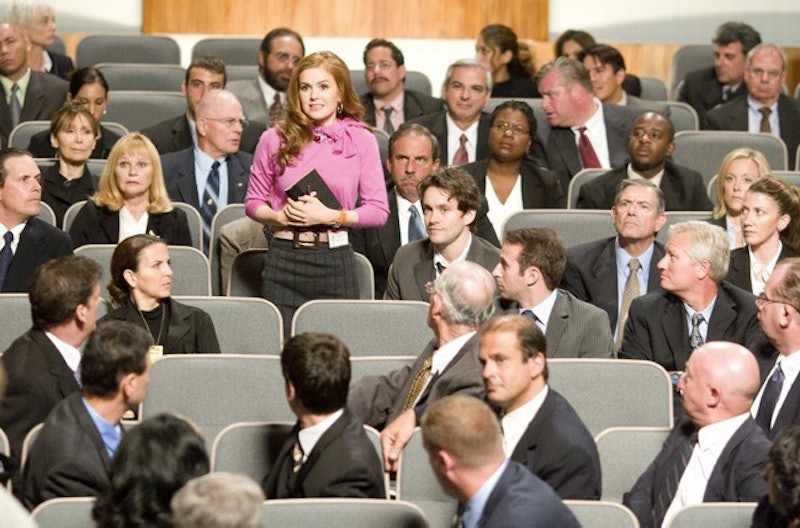 My first day on campus as a PhD student was filled with orientations: for the English department, for the graduate student associations, for new teaching assistants. When I met my professors, my cohort, and my fellow first year writing teachers, I talked about my recent move from Boston and how I planned to focus on depictions of education in transatlantic women’s writing. I didn’t realize then that just a few months later I would give up on these plans, drop out of the program, and move back to Boston — and I definitely wouldn’t have believed anyone who said that Sophie Kinsella’s romance novels would become the most important books I’d read that year.

During first few weeks on campus, it became clear that the program wasn’t the right fit. The classroom felt too disconnected from the rest of the world, and the first year writing administration mocked student essays as a teaching tool. I didn’t feel challenged or supported; I felt disheartened.

A month and a half into the school year, I was certain that my fundamental beliefs about teaching writing conflicted with the program’s guidelines; I knew the place and the program wasn’t for me. I thought more and more that maybe academia wasn’t, either. Two weeks later, I withdrew from the program, and my boyfriend and I broke our new lease.

Packing up my belongings was painful. I meticulously wrapped and taped anything that could prove breakable—pictures, dishes, candles, cutlery. I dismantled piles of books with the intention of sorting through what I might still need, but instead I threw everything — anthologies, novels, books for school — in boxes. I didn’t wrap or arrange the books, because I wasn’t sure when — or if — I would use them again.

I was a reader before I was a student. But after years of making a study out of stories, these identities were interwoven and central to how I saw myself and how I hoped other saw me. Uncertain of who else I would be or how I could reclaim these parts of me now that I was a Ph.D. drop out, I just stopped reading.

I was a reader before I was a student. But after years of making a study out of stories, these identities were interwoven and central to how I saw myself and how I hoped other saw me.

I searched for a job and tried to figure out my next steps, but I was in desperate need of a distraction. Normally, I would have found this through reading. Books had always offered a connection and grounding that I had come to depend on, and I felt rootless without stories to enter or characters to consider. But I couldn’t finish any of the books I picked up. Though I’d go through the motions of reading a few pages, the words wouldn’t catch and my thoughts would inevitably wander. Did I just make the biggest mistake of my life? Who am I without school, without an academic pursuit? Will I regret this? Disheartened and weighted with these concerns, I abandoned the books and turned my attention to job applications.

At some point, I picked up a Sophie Kinsella book. I'm not sure why I picked it up, but considering the amount of movies I was watching at the time, it’s likely I saw Confessions of a Shopaholic and decided I would try to read a similar book. Equally likely is that I picked one up off a shelf while I was staying with my boyfriend’s parents. Either way, I started reading the book… and I finished it. Even more, I read another. And another. I spent the entire winter — the winter I was meant to be in the thick of my PhD program — working my way through Sophie Kinsella’s ouvre.

Books had always offered a connection and grounding that I had come to depend on, and I felt rootless without stories to enter or characters to consider. But I couldn’t finish any of the books I picked up.

Romances are, by definition, predictable. This predictability isn’t limiting: the genre allows for an expansive range of characters, settings, subplots, and styles. But regardless of the particulars, romance novels all promise two things: A central love story and a happy ending.

Sophie Kinsella’s books are no exception to this rule. When marketing assistant (and anxious flyer) Emma Corrigan’s first solo business trip erupts into a client-losing mess in the opening scenes of Can You Keep a Secret?, she is understandably stressed. But her day gets even more chaotis when her flight home hits a patch of turbulence and she nervously shares every single one of her life secrets with a handsome man in the seat next to her. The catch comes later when that handsome man arrives at Emma’s work — and is introduced as the owner of the company where she works.

The catch is key in this genre. Kinsella’s Remember Me? follows Lexi Smart, who wakes up hospital with retrograde amnesia and learns that she has an amazing career and is married to a ridiculously successful, ridiculously good-looking real estate developer. Seems awfully tidy to be the whole story, right? (Right.) Of course, there's a catch — but I won't give it away.

Romances are, by definition, predictable. This predictability isn’t limiting: the genre allows for an expansive range of characters, settings, subplots, and styles.

While both stories focus on the romance, there's a subplot in both that I found particularly relevant: Both women are trying to find their way professionally, too. Emma, for instance, jumps from real estate agent to aspiring photographer to marketing assistant in a quick succession, but she's never quite figured out what she's good at or what she wants to do. In Remember Me?, Lexi wakes up to discover she's the head of her department at a flooring company, but she's not exactly riveted by the job. In both books, the women figure out their romantic lives... but they figure out their professional ones, too.

This career-focused subplot standard throughout most of Kinsella’s books is just as inviting as the romance: it promises an obstacle, antics, and, most importantly, a happy ending. I took me a while to notice the pattern, and by the time I did, I already grown to expect and enjoy this part of these stories. I probably wouldn't have been able to sit through any heavy, serious meditations on vocation and identity at the time without shutting down or freaking out. But charming characters grappling their professional identities in a light, enjoyable story? That snuck past my radar — for the better.

When I began reading Sophie Kinsella, I had lost my love of reading. In grad school, I analyzed books, I studied books, I talked about books— but I treated books as texts, not stories. Sophie Kinsella asked me to be a different kind of reader. She asked me to be a reader who sits with the book, enjoys the antics, and roots for main characters to end up together. And maybe sometimes it doesn't have to be any more complicated than that.