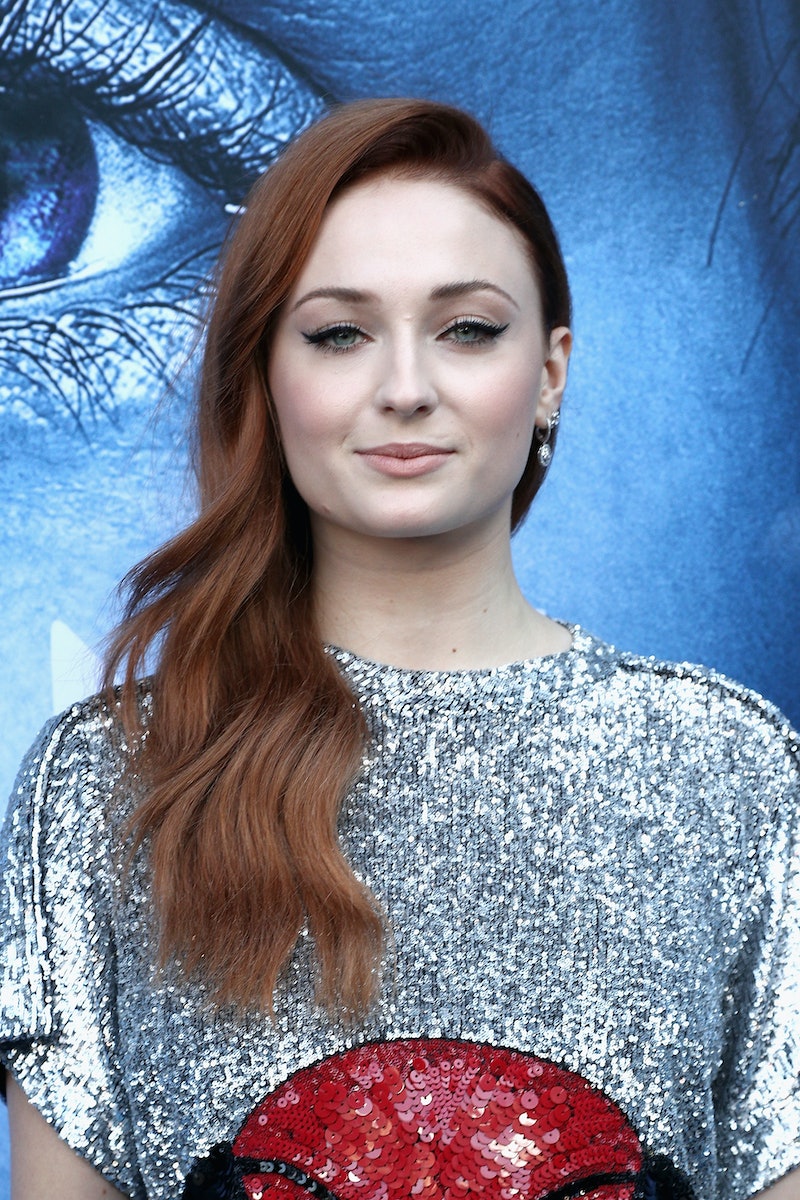 Ah, menstruation. It's a not-so-fun process that involves some not-so-fun side effects like cramps, bloating, and unexpected moods. And if there's anyone in Hollywood who currently understands that pain, it's Sophie Turner. Turner revealed why she was crying while out with Joe Jonas on his birthday, and it's not because she and her fiancé aren't getting along. It turns out, it was just Turner's time of the month — at least that's what she told fans.

The whole drama began when the Game of Thrones star was spotted out with her fiancé on Thursday crying heavily while walking through the streets of New York City. Considering that Thursday was Jonas' birthday, and the normally happy couple didn't look so happy, fans and media outlets were concerned that the outing spelled trouble for the pair. It seems that Turner got so many questions about why she was crying, she decided to clear the air. The actor revealed on Twitter that she was on her period, saying that was the reason she had gotten so emotional.

The actress retweeted an article about how Jonas "consoled" her on his birthday — which was accompanied by a photo of Turner sobbing and trying to hide her face — and wrote, "Lol. Thank god I have a loving fiancé. Periods are a bitch."

The actress' typical candor (and the sheer reliability of dealing with your period and all that comes with it on a mostly basis) earned her a great deal of support from fans and Twitter users, many of whom shared their own stories of painful cramps and horrific mood swings in a show of solidarity.

Turner is far from the first Hollywood star to get real about "that time of the month" and everything that comes along with it: Chrissy Teigen has shown off her "period skin" on social media, Jennifer Lawrence once revealed in an interview with Harper's Bazaar that the red dress she wore to the 2016 Golden Globes was deliberately chosen to hide her bloating, and Sarah Silverman even treated fans to a little "Menstrual Cycle Haiku" on Twitter a few years ago. Most notably, Lena Dunham has been incredibly outspoken about her struggles with endometriosis over the years, and wrote an essay for Vogue about her decision to undergo a hysterectomy at the age of 31.

Of course, Turner's frankness didn't stop some social media users from speculating that she had made the whole thing up in order to downplay the situation. "Are you telling that you start crying till your face is burnin' red bc you have ur period? Even when you know paparazzis are behind you? Next joke please," one skeptical Twitter user wrote. Turner laughed off the skepticism, firing back, "Girl.... you’ve never had cramps."

Naturally, that response also brought in plenty of messages of solidarity from social media users, all of whom (very literally) feel Turner's pain.

Turner's tweets are a nice reminder that even celebrities are human beings (they get cramps like the rest of us!), but it should also be noted that the fact that she's so outspoken about her menstrual cycle does a lot to break down the shame and secrecy surrounding the female body At a time when periods are still considered taboo, despite attempts to normalize the conversation around them, simply being open about menstruation does a lot to break down those walls and help people everywhere.

But mostly, Turner being so open about her period and the pain that comes with it is simply a nice reminder that no matter what the menstrual cycle may bring, we're not alone in our suffering.