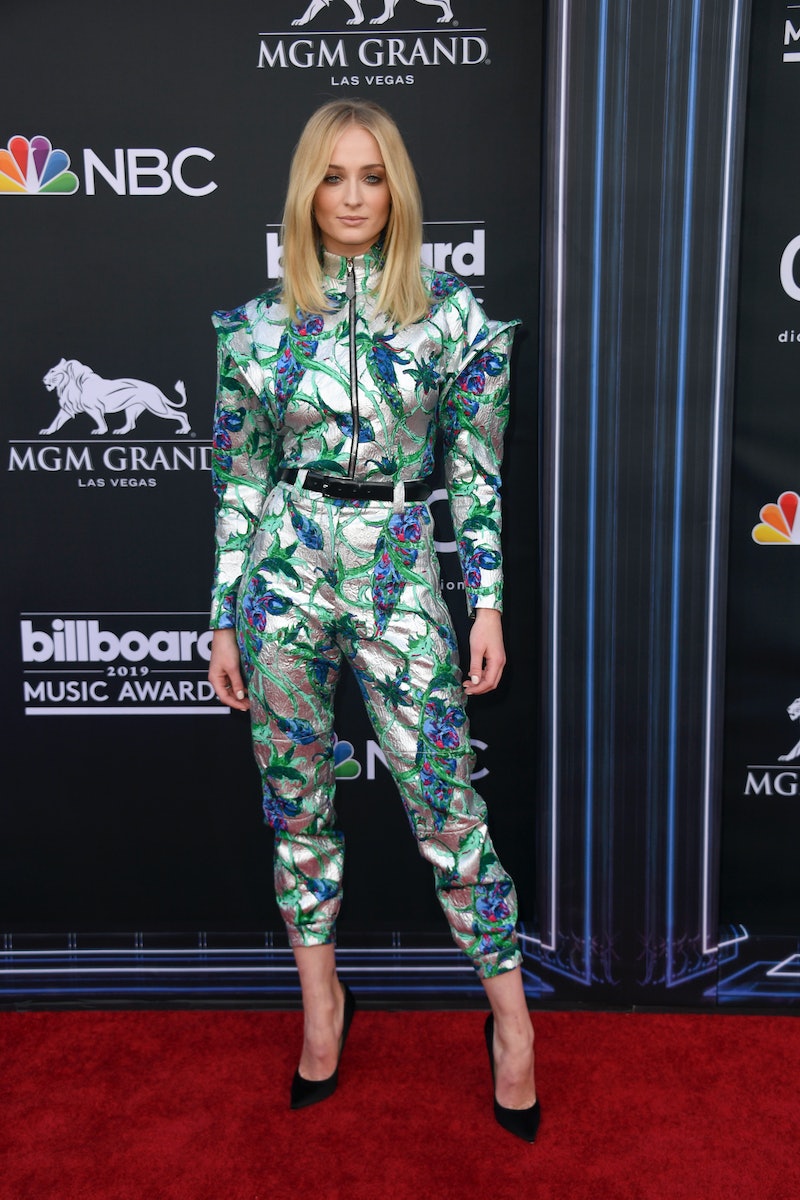 Spoilers ahead for the Game of Thrones finale. Game of Thrones has ended, and that means that the cast no longer has to worry about spoilers. However, it turns out that one member may have let something slide without even realizing it. Last year, Sophie Turner's Game of Thrones tattoo turned heads with many thinking that the new ink was a spoiler. Turner adamantly denied that the tattoo was a spoiler, but the tattoo low key did turn out to be one. The interesting part, though? Turner may not have even known.

Turner actually has two Game of Thrones tattoos. The first is the date that she and Maisie Williams were hired for their roles. The second is the ink in question. Turner has the wolf sigil of House Stark on her arm with the quote, "The pack survives," underneath. At the time, many fans thought this was a sign that the remaining member of House Stark would make it out alive while playing the game of thrones.

During a 2018 appearance on The Late Late Show, however, Turner denied any rumblings of the tattoo being a spoiler. Instead, she insisted that it's simply a line that she liked from the season 7 of the series. Now, though, fans know that the pack did indeed survive, but did Turner know when she got the tattoo?

According to tattoo artist Lauren Winzer's Instagram page, Turner got her tattoo around June 6 of last year. Filming for Game of Thrones didn't wrap until July 1. Could it be possible that Turner didn't know the full ending yet?

There is some support for the this theory. The writers of Game of Thrones went through quite a lot to keep the final season free from spoilers, and a few cast members have revealed some of the ways they did it.

According to actor Nikolaj Coster-Waldau who played Jaimie Lannister, scripts were sent electronically via an app that the cast had to download. Once the actors were finished with the scripts, they would disappear. This seems to insinuate that the actors didn't receive all six scripts at once since they'd need them repeatedly to memorize lines.

It's possible that Turner may not have had the final script for the full cast of characters or known the final ending for House Stark since filming had yet to wrap. Thus, her House Stark ink may have been an accidental spoiler.

The theory that the cast didn't get all the scripts may also be supported by a recent interview from Turner's co-star Isaac Hempstead-Wright. The actor spoke with Entertainment Weekly after the season finale aired and revealed that he believed his final script was a joke. The actor discussed reaching the scene in which he's named king, and it doesn't seem that Hempstead-Wright knew for the whole season that he would be crowned. This makes it more plausible that Turner may not have known that all 3 Stark kids (and Jon Snow) would make it out alive.

Was Sophie Turner's Game of Thrones tattoo a spoiler this whole time? Potentially. While she denied the rumor on The Late Late Show, she is an actress, after all. However, there's also the possibility that Turner really didn't know that all of the Starks would survive the show thanks to the way the cast received scripts. Of course, there's the third option. Turner really did just like the line from Season 7. Regardless of whether Turner actually did ink a Game of Thrones spoiler onto herself, her tattoo is badass, and that's really all that matters.

More like this
J.Lo's Micro-French Manicure Has A Fun, Sparkly Twist
By Olivia Rose Rushing
Black-Owned Fragrance Brand Ourside Is Changing The Luxury Perfume Industry
By Audrey Noble
Blake Lively Debuts Red Hair For The 'It Ends With Us' Film Adaptation
By Olivia Rose Rushing
The Best Beauty Looks Spotted At Paris Couture Week 2023
By Audrey Noble
Get Even More From Bustle — Sign Up For The Newsletter
From hair trends to relationship advice, our daily newsletter has everything you need to sound like a person who’s on TikTok, even if you aren’t.