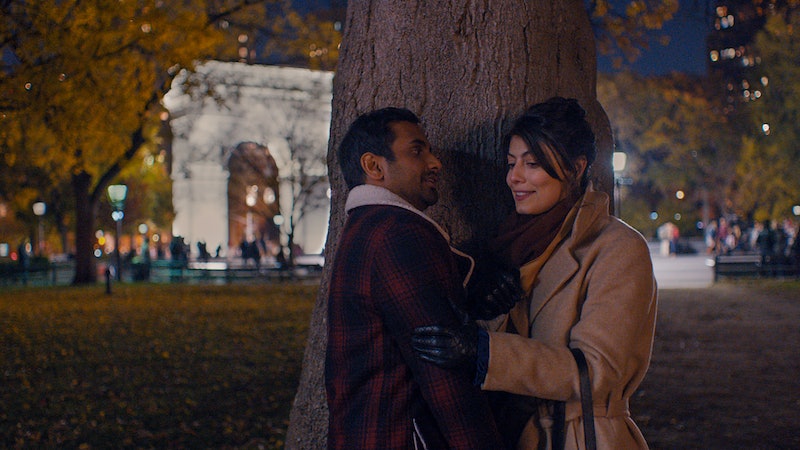 In the first season of Netflix's Master of None, Dev Shah is a consummate nice guy. He's particularly a good ally to women: He exposes a subway masturbator, he calls out a TV commercial director for casting women in stereotypically feminine roles (even though his decision to do so bites him in the ass later), and when he accidentally potentially impregnates a one-night stand, he makes the extremely gentlemanly gesture of treating her to Plan B and two bottles of Martinelli's apple juice.

But as anyone who has ever dated a dude who wears Planned Parenthood T-shirts and liberally quotes Judith Butler knows, nice guys are not always as they appear on the surface. Toward the end of what is, for the most part, a strong season of Master of None, Dev gradually reveals himself to be less of a nice guy and more of a Nice Guy; someone whose performative decency and respect for women masks a serious case of male entitlement. In some ways, he's exemplary of a very specific type of 21st-century man: a well-meaning male feminist who can speak the language of identity politics, but nonetheless harbors some myopic, if not overtly toxic, views of women.

We get a few, relatively innocuous glimpses of Dev's true nature in the first few episodes of the second season. Dev sleeps with a woman who has a blackface cookie jar, but conveniently doesn't bring it up until after he's had sex with her (she correctly calls him out for this). He also discusses sending out the same opening line to every woman he matches with on a dating app: "Going to Whole Foods, do you want me to pick you up anything?" The line is cute and funny (it's also been cited as a good example of a pickup line), but it's hard to imagine an IRL scenario where a woman would receive that message and not immediately identify it as a message that was sent to a bunch of women en masse, which ups the creep factor quite a bit.

Yet perhaps the most telling insight into Dev's relationship with women is his relationship with Francesca (Alessandra Mastronardi), an effortlessly sophisticated gamine whom he meets during his apprenticeship at a pasta shop. Francesca is a Manic Pixie Dream Girl in the Amélie model: She loves Negronis, miniature toiletries at Duane Reade, and dancing barefoot in oversized men's shirts to 1960s Italian pop music. More to the point, she loves Pino, her fiancé, a sweet and hunky yet somewhat dull luxury tile manufacturer.

Their relationship is basically a live-action J. Crew ad. (It helps that Francesca can wear the sh*t out of a boatneck top and camel-hair coat.)

Were Dev to follow his more gentlemanly impulses, he'd congratulate his friend on her engagement and quietly bow out of the picture. But, of course, he doesn't do this. Instead, he takes her on a whirlwind tour of the Tri-state area, frolicking with her at large outdoor art installations, inviting her to attend fancy loft dinner parties with John Legend, and taking evening strolls through Washington Square Park. Their relationship is basically a live-action J. Crew ad. (It helps that Francesca can wear the sh*t out of a boatneck top and camel-hair coat.) Eventually, after spending a ludicrously improbable snowbound evening sleeping in the same bed together, Dev confesses his true feelings to her on a romantic helicopter ride. Francesca politely rebuffs his advances, telling him that while she reciprocates his feelings, she is, understandably, reluctant to uproot her entire life in Italy with her fiancé for Dev.

Dev does not react to this well. In fact, he reacts to it pretty terribly. In one scene, he turns the tables on Francesca, accusing her of using him as an escape route for her life with her fiancé. To Dev, it is not only implausible that a woman like Francesca could enjoy hanging out with him without wanting to endanger her relationship with her fiancé, it is unfathomable that she could have the temerity to want a non-sexual relationship with him. In this moment, his response contains shades of every man who has ever professed his love to a female friend, only to turn on her and call her a "b*tch" the moment he realizes that she does not reciprocate his feelings.

To an extent, Master of None acknowledges the folly of Dev's behavior, with his best friend Arnold warning him that by putting Francesca on a pedestal, he was just setting her up to be knocked off: “Your relationship probably wasn’t gonna be this magical fantasy that’s in your head. It was probably gonna be a sh*t show.” Nonetheless, the season ends with Francesca in bed with Dev, implying that in spite of his childish behavior and flagrant disrespect of her boundaries, she chooses him after all.

It's unclear how viewers are supposed to interpret this ending. According to Mastronardi, the ending is supposed to be ambiguous, and not necessarily pointing to a happy ending for Dev: "It’s too easy to just say this is a happy ending and it’s too sad to say, 'Well she chose the other [guy].' ... [Ansari] wanted to just give to you the option to choose to have your personal end," Mastronardi told Bustle.

Being a "nice guy" doesn't mean you're entitled to anyone else's affections, no matter how many dreamy autumnal strolls through the city you go on or how many quirky impromptu dance parties you have.

But given how much Dev has been pining for the unattainable Francesca up to this point, it's also possible to interpret the final scene much less generously: as a message to all the spurned nice guys out there that, if you are persistent and earnest in your ardor, you too can get the girl of your dreams, regardless of whether she's already the girl of someone else's dreams. Just keep sending her kissy emojis and ignoring her polite demurrals, because you're a nice guy, and you deserve it.

It's also unclear how aware Ansari is of how Dev's actions might be interpreted by female viewers. While Ansari publicly self-identifies as a feminist, he's gotten flak for his views of women before, with Buzzfeed's Katie Heaney criticizing him for "mansplaining" feminism in his standup act. His earlier standup specials also play on tired, arguably sexist dating tropes.

“When you ask [girls] how they met their boyfriend it’s never a sweet story, like 'Oh, he was a nice guy and he was doing volunteer work,'" he says in one joke. “It’s always stories like I was at the club and this guy came up to me and was like ‘I’ve been staring at your ass all night, is it cool if I take you out sometime?'” The joke here is clear: Women hate nice guys and only date assholes, with Ansari presumably placing himself in the former category.

Of course, being a "nice guy" doesn't mean you're entitled to anyone else's affections, no matter how many dreamy autumnal strolls through the city you go on or how many quirky impromptu dance parties you have, because, to paraphrase the perennial meme, girls aren't just machines you put niceness tokens into and expect sex in return.

Yet, by presenting the romance between Dev and Francesca through a gauzy, uber-idealized lens, the show appears to be implicitly endorsing the idea that it's OK, or at least excusable, to ignore a woman's personal boundaries, provided you take a strong stance on other gender issues; it's OK, or at least excusable, to pursue someone who does not want to be pursued, provided she's sending you signals back and either way, you really, really want to sleep with her.

The show draws a clear line in the sand: Chef Jeff is a bad guy who does nice things, while Dev is a nice guy who does bad things. It's not OK to be the former, but it's OK to be the latter, provided it's in the service of love.

In the last episode of the second season, Dev finds out that his boss and de facto mentor, Chef Jeff (Bobby Cannavale), a brash, hyper-macho culinary TV personality, has been accused of sexually harassing at least a dozen female employees. After the allegations surface, Chef Jeff corners Dev and pleads with him to stand by him during this time. Dev refuses — not just because he's worried it will endanger his career, but as a matter of principle. "I respect women," he says, explaining that he couldn't possibly collude with someone who didn't.

Dev's strong stance against Chef Jeff's actions is admirable, especially because up to this point, Chef Jeff seems like a pretty nice guy himself (he lavishes expensive dinners on Dev, and he rewards people in his inner circle with restaurant jobs). Yet by the end of the season, the show draws a clear line in the sand between Jeff and Dev: Jeff is a bad guy who does nice things, while Dev is a nice guy who does bad things. It's not OK to be the former, but it's OK to be the latter, provided it's in the service of love.

That message is great for guys like Dev, who might be patiently sitting by their iPhones, waiting for a kissy emoji from their own Francesca. But it's not so great for women like Francesca, who are being told, essentially, that their own feelings and their own boundaries don't matter.

More like this
Miriam Haart & Girlfriend Nathalie May Have Broken Up After 'My Unorthodox Life'
By Brad Witter
Why Wasn't Teddi At The 'Bachelor In Paradise' Reunion?
By Brad Witter
Theo James Revealed The Truth About His 'White Lotus' Nude Scene & Fans Can't Cope
By Stephanie Topacio Long
The 'Kenan & Kel' Reunion On 'SNL' Took A Dramatic Turn, Thanks To Keke Palmer
By Brad Witter
Get Even More From Bustle — Sign Up For The Newsletter