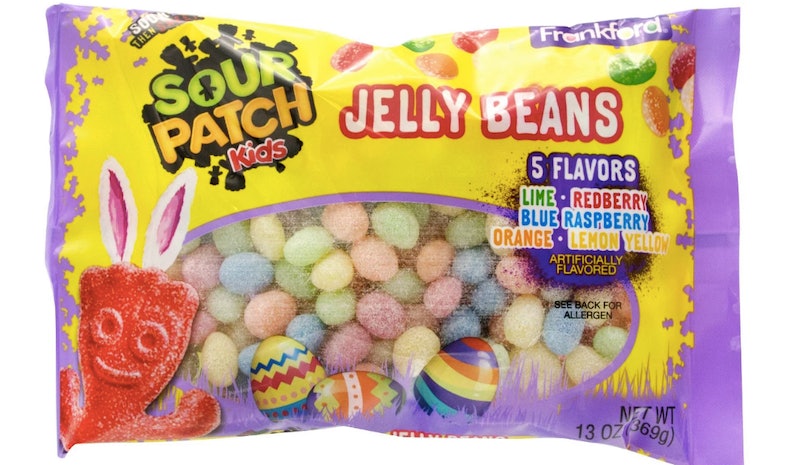 For candy lovers out there, Easter is a glorious time. There seems to be an endless bounty of new delicious delights available this time of year — in fact, it even outdoes Valentine's Day and, I would argue, rivals Halloween. Any candy that be stuffed into an egg or rabbit form miraculously appears in rabbit or egg form — and in the days after Easter the discounts are intense the joy is pure. If you've got your eyes peeled, you'll be able to see the first signs of Easter joy coming our way. Too early, you say? I say not early enough — especially with gems like these making their way onto the radar. Sour Patch Kids Jelly Beans have been spotted by the glorious and keen-eyed Instagrammer @candyhunting — and they look as delicious and puckery as your heart could possibly desire.

Sour Patch Jelly Beans seem to come in five delicious flavors/eye-wateringly bright colors: Orange, Blue Raspberry, Lemon, Lime, and... Redberry? I don't know what a Redberry is, but as red is the undisputed king of candy colors, I'm sure that they will be absolutely delicious. They come in 13-oz bags and, according to @candyhunter, they should be available nationwide on a shelf near you. They're currently retailing at Target for $2.69, so it looks like you'll be able to do some major stocking up — maybe even enough to last you through next Easter.

What can you expect from these beans? Well, according to Candy Warehouse, another retailer selling the confection, Sour Patch Jelly Beans seem to start off incredibly sour but, once you suck or chew your way through that initial tang, they end with a sweet center — exactly what I would hope for and expect from the well-known candy. And, to be honest, sour on sour on sour might be a bit tricky.

It's definitely not the first time that Sour Patch has branched out beyond its normal kid shapes — which is probably for the best, when you think about how weird it is to eat children-shaped candy. Sour Patch Ice Cream was introduced to a total love-it-or-hate-it vibe, there have been all-pink versions of Sour Patch Kids, extra large versions, and, more recently, Sour Patch Kids Marshmallows arrived at Walmart to put everyone's taste buds into a total swirl. Again, marshmallows are probably better than eating candy shaped like actual children, but for some reason the OG child shapes seem to always reign supreme.

If you're more just into the jelly bean side of things and looking to see which of your favorite candies will be making a bean-shaped appearance this Easter, then fear not — Starburst Jelly Beans have already found their way onto the scene as a rival for these Sour Patch options. Of course, this is only the beginning of the Easter candy train — and we can be sure that a lot more weird and wonderful candy will be heading our way, especially in the jelly bean and egg domains.

Sour Patch Jelly Beans seem like a great twist on the traditional, sickly sweet jelly beans that come out the time of year — but the Easter candy gods will continue to shine, and I can't wait to see what's next.