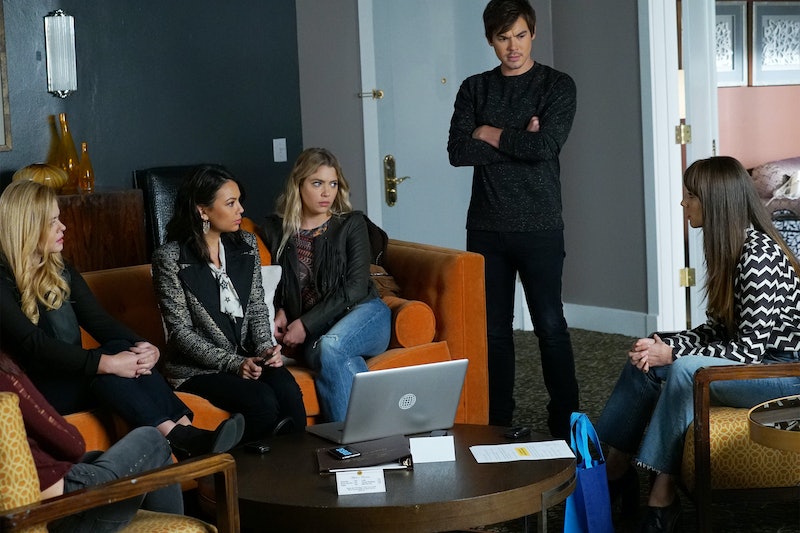 No matter how sad you may be about Pretty Little Liars coming to a close, you're probably also breathing a major sigh of relief right now. Spoilers ahead for the PLL finale. The mystery may have been solved once and for all: Spencer's Twin, Alex Drake, is A.D. on Pretty Little Liars, aka the big bad who had been tormenting the Liars relentlessly via an elaborate board game. And despite theory after theory, it's hard to deem this reveal "predictable."

During the show's seven seasons, the villain's identity has been an ongoing mystery. It would seem like fans finally got an answer — only for another plot twist to be thrown their way. In Season 2, Mona was the original A. Then in Season 3, Toby temporarily joined the A team. Ezra looked guilty, but was only "writing a book." And who can forget when Charlotte, or CeCe Drake, manipulated the Liars in a giant and terrifying doll house?

Figuring out who took over as A.D. after Charlotte's death was the the biggest question remaining, and now, at least there's some sense of closure. (Key word: some.) As it was revealed during Tuesday's series finale, Spencer has a twin, with a British accent and all, who teamed up with their mother Mary Drake.

While plenty of details have yet to be explained, it appears that Wren fell in love with Alex, and he was in on the plan all along. Alex reveals that she's jealous of Spencer's life, and that's why she tried to infiltrate it. More details, TBD, of course.

And yes, if you suspected that it wasn't Spencer who visited Toby in the previous episode, you'd be correct. It appears that it was Twincer. Surely, your head is probably still spinning right now — just like Spencer's.

More like this
Everything To Know About 'And Just Like That...' Season 2
By Jack Irvin and Grace Wehniainen
Wait, Is 'Happy Valley' Not Actually Over?
By Darshita Goyal
Netflix Shut Down 'Bridgerton' S3 Rumours About A “Very Dark” Storyline
By Bustle
'The Last Of Us' Has Officially Been Renewed For Season 2
By Darshita Goyal
Get Even More From Bustle — Sign Up For The Newsletter
From hair trends to relationship advice, our daily newsletter has everything you need to sound like a person who’s on TikTok, even if you aren’t.