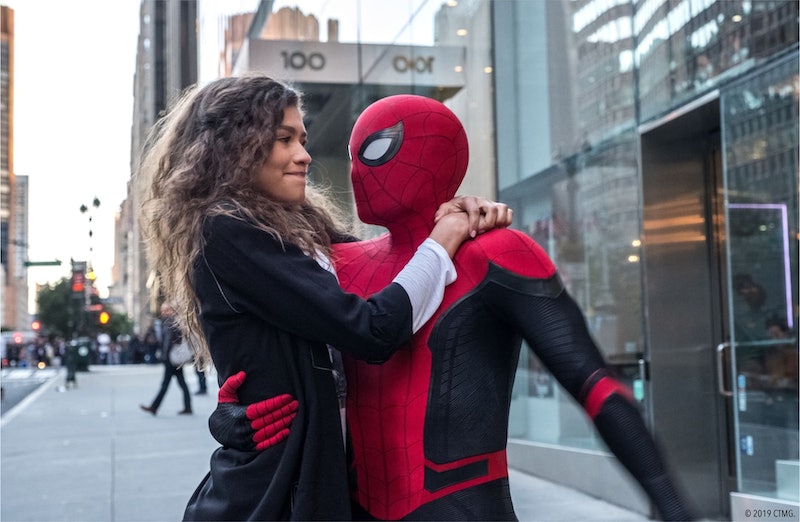 Avengers: Endgame may still be in theaters gunning for Avatar's all-time box office record, but pretty much every Marvel fan has seen the epic film by now. And that's good because Spider-Man: Far From Home is almost here. Nearly every Marvel fan is likely to watch the webslinger's new adventure, but the question remains as to how you should watch it. Should you see Spider-Man in IMAX, or will a regular ol' movie screen be just as good?

It's important to gauge the worth of seeing a movie in IMAX before springing for a ticket. The main reasons for this being that IMAX movies typically cost several dollars more than already-expensive regular movie tickets, and not everyone has an IMAX theater nearby, meaning they may need to travel a ways just to watch a movie in the format. For instance, one movie that definitely is worth seeing in IMAX is Endgame. That film, along with its predecessor Avengers: Infinity War, was the first movie to be filmed entirely with IMAX cameras. It was made specifically for that format, so to see the movie the way directors Joe and Anthony Russo intended, you really had to spring for that pricey IMAX ticket. But what about Far From Home? Does the new Spidey film have the same sort of IMAX urgency?

Technically, it doesn't. The new Spider-Man film was not filmed with IMAX cameras, and therefore wasn't specifically made to be viewed on a massive IMAX screen. Plus, IMAX isn't even the only premium cinema format available for Far From Home. The movie is also being released in Dolby Cinema, giving fans another option if they're looking for something a little more impressive than a traditional movie screening. But just because you probably won't be missing out on anything if you opt not to watch Far From Home in IMAX, that doesn't mean you still shouldn't if you have the means to do so.

Although Spider-Man: Far From Home wasn't specifically made for IMAX, it is still a movie that will benefit from being seen on the biggest screen available. The production of the movie looks beautiful, with both its settings and special effects deserving of an IMAX viewing. Its plot takes place largely in Europe as Peter Parker makes his way across the continent on a class trip, and actual filming took place in London, Prague, and even Venice. This allows viewers to take a virtual trip around the world alongside Spidey, and who wouldn't want to see Venice in IMAX?

Then there's the movie's larger-than-life special effects. A new group of villains known as the Elementals are introduced in the film, and they would also look great on a giant IMAX screen. Standing several stories high and composed entirely of water, fire, earth, and air, respectively, these baddies are visually spectacular and are deserving of a screen that matches their scale.

If you don't want to pay for it — or if a theater is not geographically convenient — then you don't have to worry about seeing Spider-Man: Far From Home in IMAX. But if the premium theater is an option for you, then the movie will definitely look more impressive on a huge IMAX screen and may be worth splurging on.