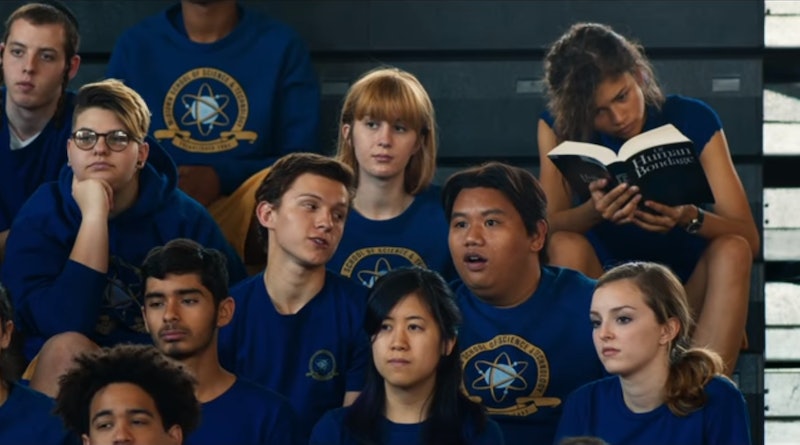 On the surface, a Spider-Man movie seems like an unlikely candidate to be called diverse, but Spider-Man: Homecoming's cast is wonderfully inclusive thanks to stars like Zendaya, Laura Harrier, Jacob Batalon, and Tony Revolori. While it's true that Tom Holland is playing yet another white, male superhero, his Peter is part of a community of friends and foes from different ethnicities and cultures. As reported by Vulture, the film's producer, Amy Pascal, had the perfect answer for why Spider-Man: Homecoming's cast is diverse. During a press luncheon, she said, "I would say the inspiration for it was reality."

As a New Yorker, Peter Parker lives in one of the truest melting pots in America. He also happens to be a high school student. To surround him with nothing but white teens would be more than disappointing, it would present a version of New York City that simply doesn't exist. While it would be wonderful to one day see Miles Morales become part of the cinematic universe, it's still refreshing to see the Spider-Man franchise taking a step forward in terms of representation. The film's cast seems to agree.

At the conference, Revolori, who plays Flash Thompson in the film, said he was thankful that the producers cast him to play the iconic bully. The character is depicted as white in the comics, and Revolori is a Latino actor. The actor said,

Both Revolori and Pascal's answers bode well for Spider-Man: Homecoming.

Superhero movies are still behind in terms of diversity. That's heartbreaking because this genre, perhaps even more so than any other, should feature people from all walks of life. It's so vital for people to see themselves reflected onscreen, especially as heroes. Thankfully, upcoming films like Black Panther and Aquaman will be putting the stories of heroes of color front and center.

In the meantime, let's hope more people take Pascal's words to heart. If casting directors think about the reality of what the world looks like when they're choosing actors, then going to the theater will be a more inclusive and exciting experience for everyone.