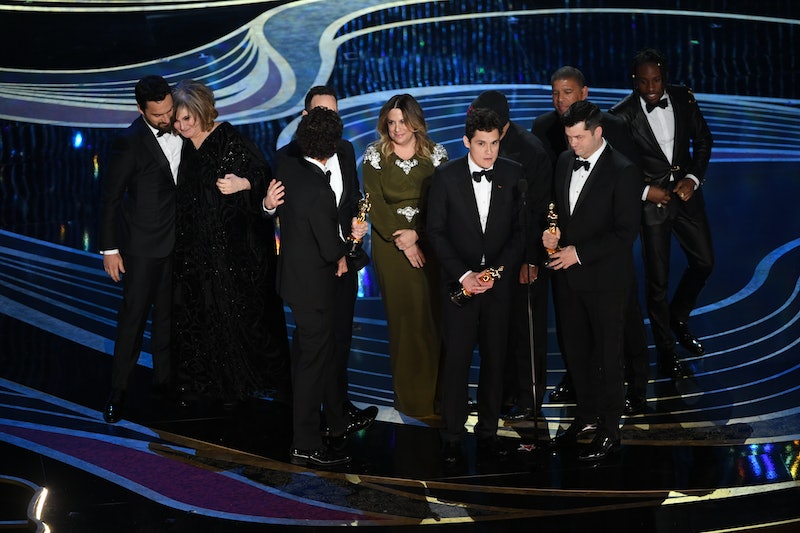 Spider-Man: Into The Spider-Verse is one of the sleekest, stylish, and weirdest films to ever land a Best Animated Feature award, but the filmmakers let viewers know that they felt like winners well before Spider-Man: Into The Spider-Verse won an Oscar. As producer and co-writer Phil Lord said in the film team's acceptance speech, "When we hear that somebody's kid saw the movie and turned to them and said 'he looks like me' or 'they speak Spanish like us,' we feel like we already won."

The importance of Into The Spider-Verse is present both on and off-screen. Shameik Moore lept to the stage and although he didn't get the chance to speak his mind, his performance as Miles Morales was essential to delivering the message: that anyone can be behind the mask, and anyone can be a hero. One of those co-directors, Peter Ramsey, became the first black man to win Best Animated Picture. In an interview with NPR, Ramsey said that they, "wanted to put our best foot forward and create something that people would be able to relate to and love." He also spoke about the importance of featuring characters of color, like the Afro-Latinx Miles Morales, front and center in films of all genres. "It means a lot for young black and Latino kids to see themselves up onscreen in these iconic, heroic, mythic stories ... It's a need being fulfilled."

The speech was an emotionally wrought and historic moment, but whoever was behind the editing during the speech also managed to have a bit of fun with a clever edit. It's fair to expect that the Oscars would cut to members of the film's cast, but the cut to Willem Dafoe, nominated that evening for Best Actor for At Eternity's Gate, likely got a chuckle out of any fans who have been following the four separate depictions of Spider-Man that have come to theaters over the last two decades. Dafoe played the villainous Green Goblin in the original Spider-Man film, which was a playful easter egg appreciated by fans, as well as as a reminder the Spider-Man franchise's long, varied history.

Unfortunately, not everyone who was involved in the making of Spider Man: Into The Spider-Verse got to speak, as the mic was muted before yet another of the film's many producers could say a word. But while not everyone got their say on the Oscar stage, the award solidifies the film's place in history and ensures that its message of inclusion and strength will be remembered long after the Oscar ceremony. Spider-Man's win was part of a momentous night that features numerous wins for films like Black Panther, If Beale Street Could Talk, Roma, Bao, and others that stood out for featuring diverse perspectives and voices. What Spider-Verse does that those films don't, however, is cater to children, and it's because of the movie that those kids are going to be able to go to the theater and see themselves reflected back onscreen.