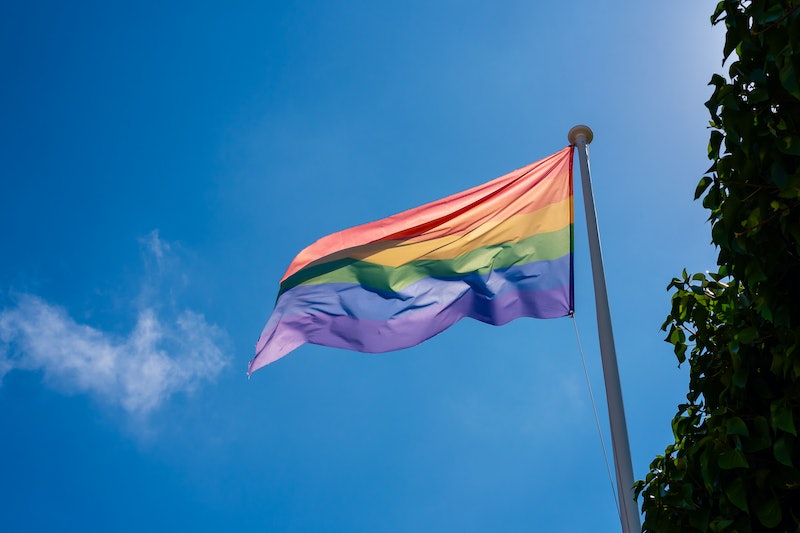 In the fall of 2010, a number of young, white, gay men died by suicide after being bullied. This prompted Canadian activist Brittany McMillan to rally started rallying around the idea of wearing purple, which stands for "spirit" on the rainbow flag, on a particular day in October to honor those who'd died and who were still at risk.

"I want LGBTQ+ youth who are feeling alone or feeling like there’s no way out to know that they’re not alone," McMillan told Bustle in October 2017. "They are cared for and there are resources out there that are available to them." The day of wearing purple became Spirit Day, recognized on the third Thursday of each October. And Spirit Day's history is full of importance for young LGBTQ people across the country.

Rich Ferraro, Chief Communications Officer at GLAAD, tells Bustle that he remembers that during the fall of 2010, there was weekly news of another young gay child dying by suicide. After noticing McMillan's viral Facebook efforts to spread the wearing of purple for Spirit Day, GLAAD reached out to offer to amplify her grassroots initiative to "the greater media industry." After beginning collaborative work between McMillan, GLAAD, and out celebrities like Adam Lambert, who agreed to wear purple in support of Spirit Day, "there was energy and momentum in the greater media industry and calling attention to this issue [of queer youth suicide] and speaking out," Ferraro says.

After a couple of years, professional sports organizations from the MLB and NBA to NASCAR were wearing purple, while kindergarten classes across the country were talking about bullying while making purple arts and crafts, according to Ferraro. And while wearing the intense visual effect of people wearing purple on Spirit Day to bring awareness to queer youth mental health and suicide prevention, Ferraro says that it is "also our responsibility to remember for the rest of the year that there are pockets of our culture where LGBTQ inclusion is really rare."

These pockets — specifically, queer youth of color, trans and non-binary folks, folks who don't identify as L, G, or B, folks who aren't out, or folks whose identities intersect across these levels of marginalization — are not given the same level of media coverage as the suicide of white gay cis boys. According to a November 2010 Guardian article published by queer theorist Jasbir Puar, white gay cis boys received much more attention in the media coverage of the fall 2010 suicides than queer youth of color, including trans and gender nonconforming youth, during the formation of movements like Spirit Day.

While the media coverage accompanying Spirit Day's formation focused largely on school-based homophobic bullying, family rejection also plays a huge role in the mental health of young queer kids. According to a study published in the fall of 2010 in the Journal of Child and Adolescent Psychiatric Nursing, when the families of queer youth provide affirmative and accepting atmospheres, their children are much less likely to experience depression, substance use, and suicidal ideation and self-harming behaviors.

The roots run deeper even than familial structures and experiences of LGBTQ youth. According to a 2012 study published in the journal Professional Psychology Research and Practice, nearly half of all trans youth surveyed reported experiencing gender-based victimization, and 28.5% reported trying to die by suicide. Of those trans young people, 39% reported having tried to die by suicide three or more times.

Spirit Day has worked to combat the sense of isolation trans youth too often experience. In 2014, for example, actor Laverne Cox led a ceremony during which the Empire State Building lit up in purple to honor Spirit Day. This was the first time the iconic building was lit up in purple, "which was a first in a really great moment of visibility for trans youth," Ferraro tells Bustle.

These kinds of acts of visibility may be especially important for trans youth of color, offering comfort and combating isolation amongst social oppression. For queer and trans youth of color, the structural barriers to receiving everything from mental health care, to employment, to safety moving down the street can be severely compromised. Systemic violence and discrimination against queer people of color has been linked to increased risks of suicide ideality and action amongst queer people of color, according to a 2011 study published in the American Journal of Public Health. Another study, also published in the American Journal of Public Health, found that Black, Latinx and Native American/Pacific Islander LGBT youth (especially girls) were much more likely to experience suicidal ideation and action than their white counterparts.

And when schools get involved in providing these affirmations, and in discouraging discriminatory practices and behavior, the mental health improvements among LGBTQ young people are even stronger. According to a 2018 study published in the International Journal of Environmental Research and Public Health, LGBTQ youth experienced much more positive mental health outcomes when they attended schools that valued policies celebrating LGBTQ youth rather than passively allowing discriminatory practices. Spirit Day's accessibility to schools (the least you have to do to participate is wear purple) is about spreading precisely that kind of openness and joy in being queer.

This Spirit Day is an excellent time to remember that all LGBTQ people deserve better. If you're a queer human, treat yourself to something extra special on Spirit Day, because you deserve it. And reach out to the fellow LGBTQ folks in your life who might need some affirmations, since affirmations and joy transcend age. Because according to Ferraro, "spreading joy" is also a crucially important part of Spirit Day: that joy can be a huge commitment to keeping going even when it feels impossible. Because you're not alone, and you can do it.

Lucassen, M. (2018) How LGBT+ Young People Use the Internet in Relation to Their Mental Health and Envisage the Use of e-Therapy: Exploratory Study. Journal of Medical Internet Research, https://www.ncbi.nlm.nih.gov/pubmed/30578194.

Burk, J. (2018) A Media-Based School Intervention to Reduce Sexual Orientation Prejudice and Its Relationship to Discrimination, Bullying, and the Mental Health of Lesbian, Gay, and Bisexual Adolescents in Western Canada: A Population-Based Evaluation. International Journal of Environmental Research and Public Health, https://www.ncbi.nlm.nih.gov/pubmed/30400236.

More like this
Jujubee’s Humble Reminder
By Sam Ramsden
How To Come Out Online, According To Trevi Moran
By Melanie Mignucci
Rylan Clark Is Ready To Party
By Sam Ramsden
Travis Alabanza On Not Fitting In
By Sam Ramsden
Get Even More From Bustle — Sign Up For The Newsletter