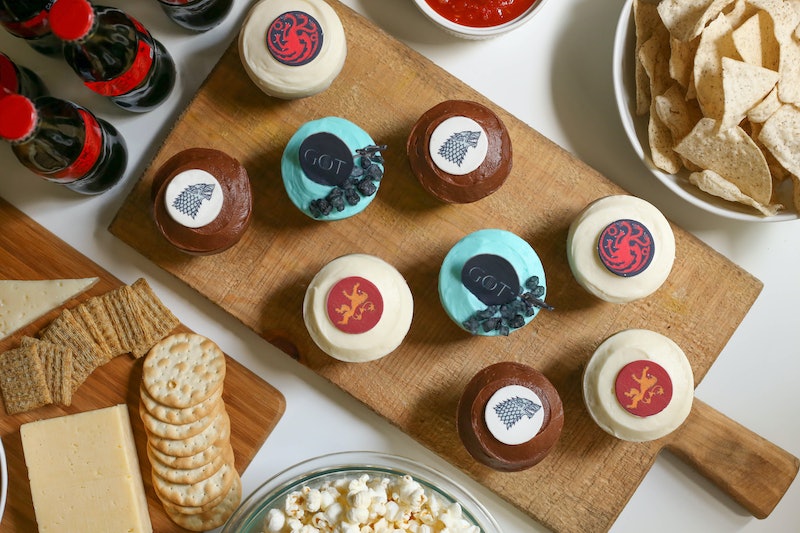 Are you ready for the final episode of Game Of Thrones? Well, if you need a little something to help you get through it — which, honestly, would be understandable, the way things have gone this season — maybe this will help: Iconic cupcake bakery Sprinkles is releasing Game Of Thrones-themed cupcakes and boxes this week, just in time for Westeros’ final showdown. They’ll only be available from May 17 through May 19, but preorders are available now — just, y’know, in case you’re still on the lookout for the perfect dessert to serve at the last GoT watch party you’ll ever have.

The very first Sprinkles location opened in Beverly Hills in 2005 — almost 15 years ago (my, how the time does fly). The creation of Candace Nelson, who was once an investment banker, the bakery has since grown into a phenomenon, with more than 30 locations nationwide, an ice cream line, and even a cupcake ATM. Remember the days before cupcakes were in vogue? Sprinkles is generally credited with being responsible for the treat's meteoric rise.

Sprinkles’ many locations bake up a wide variety of flavors every day, with new, limited-edition flavors hitting the menu each month. Sometimes, though, they come up with something pegged to a particular event — which is where the current crop of Game Of Thrones treats comes in.

The star of the show is, of course, the main Game Of Thrones Cupcake. Made of dragon fruit lemon cake, it’s frosted with ice blueberry buttercream and topped off with “dragon glass” (that is, black cherry hard candy), a little circle featuring the show’s initials written in its signature font, and a tiny little black sword. But, if you order either a dozen box or one of Sprinkles’ “bake boxes,” you’ll find that there are a few supporting players, as well: In addition to the Game Of Thrones Cupcake, you’ll also get red velvet cupcakes topped with the House Targaryen sigil, vanilla cupcakes finished off with the House Lannister sigil, and dark chocolate cupcakes featuring the House Stark sigil. It all comes down to these three Houses, so, hey, why not have them face off in a cupcake box as well as on the battlefield?

For the curious, the dozen boxes come with three of each for all four cupcake varieties, while the bake boxes include not just a selection of the themed cupcakes, but also four cookies and four brownies. Prices depend on the location, but generally, you can expect the boxes to run between $47 and $51.

Seasonal specialties have become the norm for today’s sweets market, but even beyond monthly new flavor releases, Sprinkles regularly unleashes themed, limited-edition cupcakes on the world, too — often with a pop culture bent. Back in 2013, for example, the bakery teamed up with Kat Dennings and Beth Behrs on a Two Broke Girls cupcake; featuring a graham cracker crust, vanilla cake, chocolate chips, dark chocolate frosting, and fleur de sel, it celebrated not just the show, but National Cupcake Day, too. When the Care Bears celebrated their 35th birthday in 2017, Sprinkles created a whole line of cupcakes in honor of the occasion, with each cake arriving topped with a little Care Bear emblem. And when Meghan Markle and Prince Harry got married last year, there was — you guessed it — a Royal Wedding cupcake on offer at Sprinkles.

Each time, though, they’re only available briefly — and the Game Of Thrones Cupcake and the two themed boxes are no exception. You’ll only be able to get them from May 17 through May 19, which means that once the finale airs on Sunday, these thematically appropriate treats will be gone for good. Grab ‘em while you can — although if you miss ‘em, at least you’ve got two other tasty-sounding flavors available for the rest of May, even if they aren’t Game Of Thrones-themed: A Strawberry Shortcake Cupcake Bar is available all month, while a Pink Lemonade Cupcake festooned with a little rainbow hits the menu on May 20. Both will be up for grabs until June 2.

Are you ready to see who’s finally going to win the Iron Throne — or maybe even who’s going to topple it completely?

More like this
Why TikTok Is Obsessed With Caesar Salads Right Now
By Alexis Morillo
TikTok's Butter Board Might Be The New Cheese Plate
By Emma Carey
Nicola Coughlan Shared A Lady Whistledown Excerpt From ‘Bridgerton’ Season 3
By Grace Wehniainen, Alyssa Lapid and Sam Ramsden
'House of The Dragon' Episode 6 Will Take Place A Decade After Episode 5
By Kadin Burnett
Get Even More From Bustle — Sign Up For The Newsletter