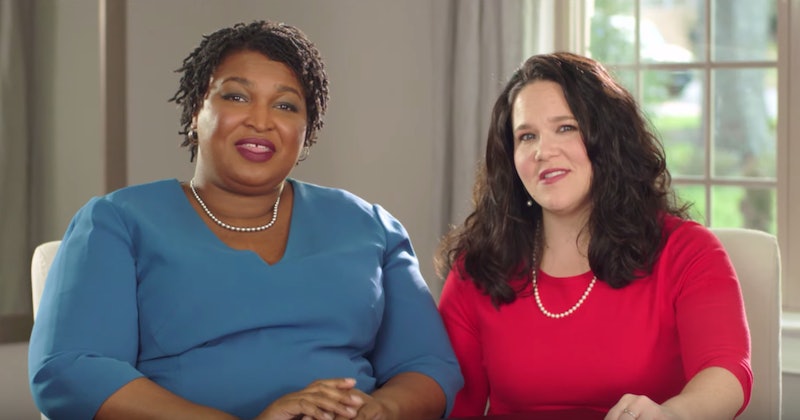 Viewers in Georgia who are tuned in to the Super Bowl on Sunday will get a message about voting rights delivered right to their television screens. On Thursday, The Atlanta Journal Constitution reported that former gubernatorial candidate Stacey Abrams is starring in a Super Bowl ad that will be aired across Georgia-affiliate news channels on Feb. 3.

Abrams' voting rights group, Fair Fight Action, booked 30 seconds of airtime for the commercial, according to AJC. In the ad, which Fair Fight Action also uploaded on YouTube on Wednesday, Abrams and Crawford said that although they didn't see eye-to-eye on every single issue, they had one thing in common: a love for their state.

The ad shows both women talking about their desire for fair elections in Georgia. "Every vote should be counted from every corner of our state," Abrams said. Crawford, a representative of Habersham County, which is in the middle of a tense legal battle over a former legislative election, added that the Peach State needed hand-marked paper ballots and more support for election officials.

To show support for their cause, Abrams and Crawford asked viewers to send selfies under the #FairElectionsNow hashtag on social media. "Because picturing fair elections," Abrams said, "is something we can all do."

Time and again, Abrams has been vocal about her fight against election fraud and voter suppression. The Democrat, who ultimately lost to Republican Brian Kemp in the November gubernatorial race, ramped up efforts to register and mobilize black voters in her state before the election.

During the election, Abrams criticized Kemp — who, as Georgia secretary of state at the time, was in charge of overseeing the election he ran in — for election mismanagement. Kemp denied negligence, claiming that he followed current laws to fight voter fraud.

Though she acknowledged that Kemp was the "victor" in the race, Abrams delivered a stirring speech days after the election. "This is not a speech of concession, because concession means to acknowledge an action is right, true, or proper," she said. "As a woman of conscience and faith, I cannot concede that. But, my assessment is the law currently allows no further viable remedy."

Abrams added that she had no interest in running for public office if it meant she would have to "scheme my way into the post."

The upcoming Super Bowl ad is just another addition to Abrams' political portfolio. Days after the game, she will be delivering the Democratic Party's rebuttal to President Trump's State of the Union address on Tuesday night — a decision by Democratic leaders that many have praised.

According to the AJC, the Fair Fight Action commercial that will air during the Super Bowl cost some $100,000. It will be digitally advertised in metro Atlanta and north Georgia as well, the publication reported.