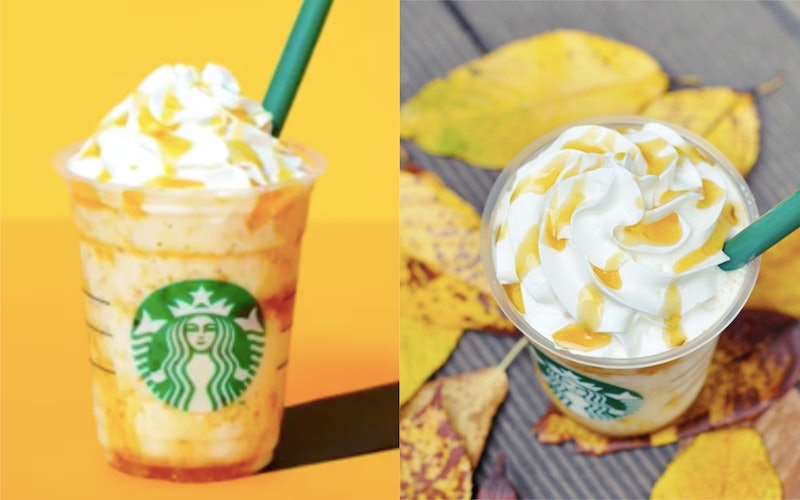 The Pumpkin Spice Latte has reigned supreme in autumn since its introduction on Starbucks menus in 2003, so it may seem a little jarring to see another fall contender throw its cup into the ring — but that's exactly what the Gold Frappuccino at Starbucks Japan is here to do. The drink was introduced to Starbucks Japan's menu on Sept. 20, according to the company's Instagram page, and features a fall flavor that a lot of people in the U.S. might not have expected. Instead of pumpkin, Japan's latest fall drink is flavored with sweet potato.

The drink is officially called the "Sweet Potato Gold Frappuccino," according to Starbucks Japan's Instagram. While sweet potato is certainly considered a fall flavor in the U.S., it isn't as typically associated with desserts; however, Japan Today explains the significance of the flavor in Japan. "The new Frappuccino's base is actually a traditional Japanese sweet snack called imo kenpi, which are candied strips of sweet potato," the site explains. "In this case, imo kenpi coated in a syrup glaze extracted from aged Japanese sweet potatoes were blended up to give the Golden Sweet Potato Frappuccino a crunchy texture, and the glaze itself is also swirled in the drink for a rich, sweet syrupy kick."

Imo kenpi, which resemble french fries in their shape, are so popular in Japan that they're available basically in all supermarkets — here in the U.S., you can buy them on sites like the Nippon Shop, find them in specialty stores, or make them at home. But if you want to get the full experience of what they're like in Frapp form, you'll have to head over to Starbucks Japan. Based on the images that have been posted on the Starbucks Japan Instagram, it won't disappoint.

The drink is actually one of two sweet potato drinks added to Starbucks Japan's limited time menu — the other is a Sweet Potato Gold Macchiato. Per Japan Today, it features a "sweet potato syrup to add a checkered layer of fall flavor to a caramel macchiato." So much like the PSL over here in the U.S., you can enjoy this fall flavor hot and cold.

This isn't the first 'gram-worthy drink to emerge from Starbucks Japan by far; this past summer, the internet was collectively entranced by the "Peach on the Beach" Frappuccino, which was blended with white peach pieces, peach juice, peach puree, and peach sauce. It was available from July 19 through Aug. 29, but fruit lovers still had plenty of other opportunities to celebrate the end of summer. On Aug. 30, Starbucks Japan introduced the Green Apple Jelly and Baked Apple Pink Frappuccinos, topped with apple candy bits and crumbled pastry bits with cinnamon, respectively.

The Sweet Potato Gold Frappuccino has since taken center stage on Starbucks Japan's lineup, both on their menu and on their Instagram, but fans looking to try it better get a move on — according to Japan Today, the two limited edition drinks will only be available until Oct. 10.