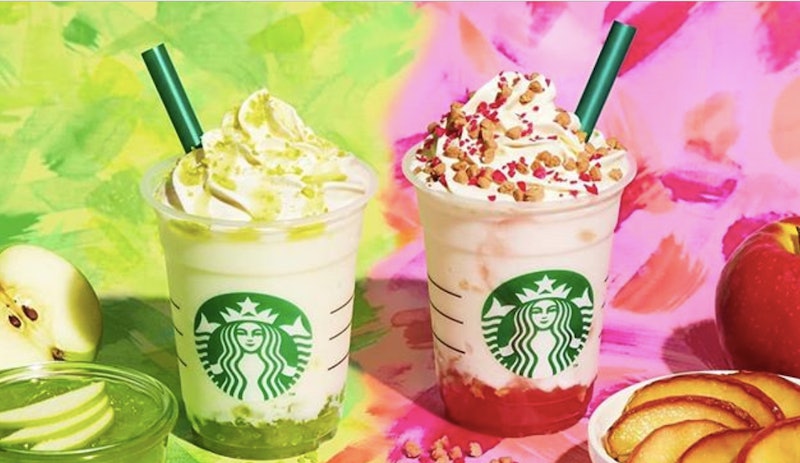 If you want to escape the pumpkin frenzy of the fall and get away from it all, then you might want to set your sights on Japan. Starbucks Japan Artful Autumn drinks are coming — and they are a totally different twist on fall classics. There's a Green Apple Jelly Frappuccino and a Baked Apple Pink Frappuccino that both look like sweet and fresh alternatives to the land of pumpkin spice.

The drinks were spotted by Instagrammer @CandyHunting, who announced that these colorful delights would be out the end of the month — if you're lucky enough to be in Japan, that is. "While Starbucks is releasing pumpkin spice everything today in the US, Starbucks in Japan is releasing Artful Autumn drinks on August 30," the post reads. "The Green Apple Jelly Frappuccino has apple gelatin and crisp bits of apple and is topped with green apple candy bits. The Baked Apple Pink Frappuccino has pink apple compote and crumbled pastry bits with cinnamon."

Apparently, Instagrammer @soranews24 helped with the discovery, by translating the Japanese press release, so we could get all of the juicy details.

And I am all about this. Growing up in New England, fall might have been pumpkin season but, more than anything, it was apple-picking season. And the humble apple has been woefully overlooked in our current age of pumpkin everything. So it's really exciting to see apples getting some attention this fall.

Plus, these just seem really freakin' cool. Green apple candy bits? Crumbled pastry bits with cinnamon? These are not your average Frappuccinos — and with their bright colors lining the base of the cups, they look cool as heck. If you happen to be heading to Japan, this is your chance for a different kind of fall fun on your Insta feed.

As much as the return of the Pumpkin Spice Latte for 2019 brings a tear to the eye of many an American millennial, there's no denying that Starbucks tends to offer some pretty amazing concoctions around the globe. Japan alone has had so many amazing Starbucks drinks — from a Tiramisu Frappuccino with real cake and custard inside to this summer's Peach on the Beach Frappuccino. Oh, and can we ever forget the Witch and Princess Frappuccinos that let you choose your own adventure.

Japan doesn't have all the fun — you can find delicious and wacky delights all over the globe, like the Speculoos Latte in the Asian Pacific markets and the Juniper Latte in Canada. Seriously, it's enough to make you want to buy an around-the-world ticket and see where your taste buds take you.

With August slipping away, many of us are bracing ourselves for the onslaught of pumpkin-flavored products, pumpkin-scented products, and pumpkin-pumpkined products. They will be everywhere. They will be sweet. They will be inescapable. That's why it's so refreshing to see some apple-y twists with the Green Apple Jelly Frappuccino and the Baked Apple Pink Frappuccino. Sure, you're going to have to go all the way to Japan to get one — but what a good excuse for a trip.