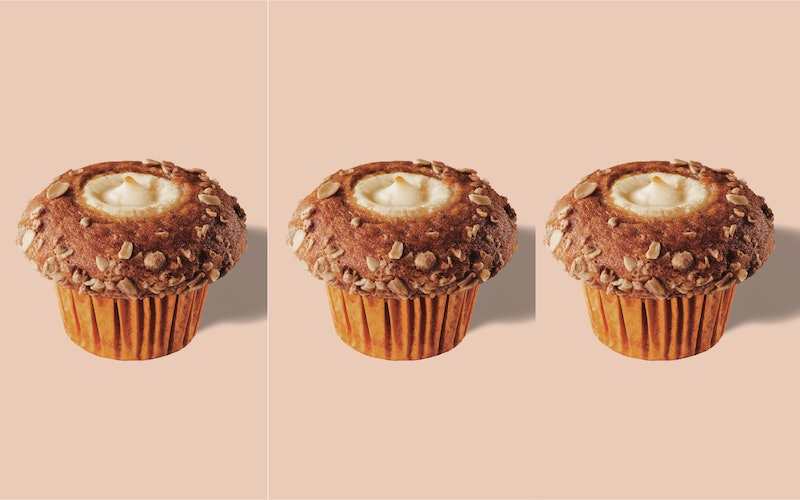 According to Starbucks and the passionate contingent of Pumpkin Spice Latte fans out there, fall is coming early this year. On Tuesday, August 27, Starbucks' fall menu will hit stores. And while it includes a few seasonal drinks, there are also some fall-themed foods that will be making their return.

The returning foods including three pumpkin-flavored items and one that's cute, appropriate for Halloween, and will make any little kids who enter a Starbucks beg their parents for a treat.

First up, there's the Pumpkin Cream Cheese Muffin. "Our moist, perfectly spiced pumpkin muffin is topped with sweet cream cheese and a sprinkling of chopped, caramelized pepitas for a delightful balance of salty and sweet," Starbucks explains. Since pepitas are variety of pumpkin seeds, that's a nice, extra pumpkin-y touch.

Next, there is the Pumpkin Scone, which is a spiced pumpkin scone topped with vanilla icing and pumpkin spice drizzle.

Third are the Pumpkin Spice Madeleines. Starbucks usually carries regular madeleines, but for fall the store, of course, has a pumpkin variety. "Traditional madeleine cake flavored with pumpkin, cinnamon and a hint of ginger," according to the company's description.

Lastly, there is a Cat Cake Pop, which is exactly what it sounds like. Or, as Starbucks puts it, "soft, creamy vanilla cake and white chocolaty icing you know and love, with a new feline design. Pretty much the cat's meow."

Along with the returning baked goods, the fall beverages that will be in stores on Tuesday are the Pumpkin Spice Latte, Salted Caramel Mocha, and Pumpkin Cream Cold Brew. The first two are returning favorites that are available hot, iced, or as a Frappuccino. The Pumpkin Cream Cold Brew is a new drink that "is made with Starbucks Cold Brew, vanilla, and finished with a pumpkin cream cold foam and a dusting of pumpkin spice topping."

To celebrate the new menu and the "new season" (fall actually starts on September 23, everyone), Starbucks is doing buy one get one free drinks on Thursday, August 29. The deal will be on handcrafted beverages purchased in size grande or larger after 3 p.m.

If you can't tell, the main thing to takeaway from all of this is that if you like pumpkin and fall and treating yourself, Starbucks has you covered. It just might be hard to decide what to get or whether pairing a pumpkin spice baked good with a pumpkin spice drink is too much.