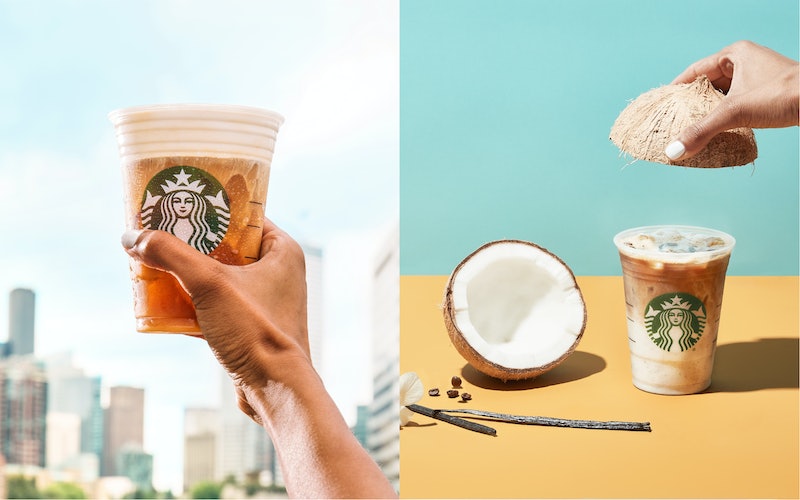 Courtesy of Starbucks/Remixed by Bustle

Excellent news for anyone whose idea of a perfect summer day includes an ice cold coffee drink: On Tuesday, July 10, Starbucks will add two new iced drinks to its cold coffee menu. Called the Salted Cream Cold Foam Cold Brew and the Iced Vanilla Bean Coconutmilk Latte, they highlight some of Starbucks’ signature ingredients in new and delicious ways — and even better, they’re permanent additions. That’s right — you won’t have to scramble over a brief, three- or four-day period to get them. Instead, you’ll be able to enjoy them in a leisurely fashion befitting of their launch season. What’s better than enjoying an ice-cold coffee treat as you bask in the sun on a relaxing summer day? Not much.

Both of the new drinks feature relatively recent Starbucks additions as their key components: Cold Foam and coconutmilk. Cold Foam arrived nationwide just a few months ago; although it had previously been introduced at the Reserve Roastery in Seattle way back in December of 2014, it wasn’t rolled out to non-Roastery (read: regular ol’ Starbucks) stores until April of 2018. A clever way to add the rich, thick foam that typically appears atop hot drinks to cold ones, the Cold Foam is “frothed cold… by blending nonfat milk until it is smooth,” according to a fact sheet from Starbucks. The result is the creation of “layers of creamy texture and flavor without the cream.” Thus far, the Cold Foam has mainly been seen as a feature of the Cold Foam Cascara Cold Brew and Cold Foam Blonde Iced Cappuccino, although you can also ask your barista to add it to any iced drink you like.

Meanwhile, Starbucks began testing coconutmilk as a non-dairy milk alternative in 2014, finally adding it to the menu in February of 2015. At the time, the choice to go with coconutmilk over almondmilk had everything to do with allergy concerns, reported Reuters in 2014. Tree nut allergies — which include almonds — are one of the most common allergies out there, and therefore a big concern both for consumers and companies. However, coconuts actually aren’t botanical nuts (even though the Food and Drug administration recognizes them as tree nuts); they’re fruits, notes the American College of Allergy, Asthma, and Immunology. As such, even though we have seen some allergic reactions to coconuts in the past, they’re generally considered safe for people who are allergic to tree nuts to eat. (Definitely check with your doctor before consuming coconut if you have a tree nut allergy, though.) Starbucks did end up adding almondmilk to the menu in 2016, but the allergy concerns were still worth noting.

Anyway, the point is this: These two ingredients — Cold Foam and coconutmilk — feature prominently in Starbucks’ new iced coffee drinks. The Salted Cream Cold Foam Cold Brew consists of Starbucks’ classic Cold Brew coffee with the tiniest hint of caramel, topped with salted cream Cold Foam; meanwhile, the Iced Vanilla Bean Coconutmilk Latte comprise vanilla bean coconutmilk shaken with ice and dressed up with shots of Starbucks’ signature espresso. The second of these two drink is notable for being a Starbucks latte that isn’t super sweet; since it has no syrup in it — unlike most of Starbucks’ flavored lattes, both hot and cold — it will likely appeal to those who don’t really have a sweet tooth.

They’ll be available starting on July 10 — and, again, there’s no limit on how long you’ll be able to get them: Because they’re permanent menu items, you can enjoy straight through summer, into the fall, and all through the winter, if that’s your jam. Grab ‘em at your friendly neighborhood Starbucks at your leisure. Happy summer!