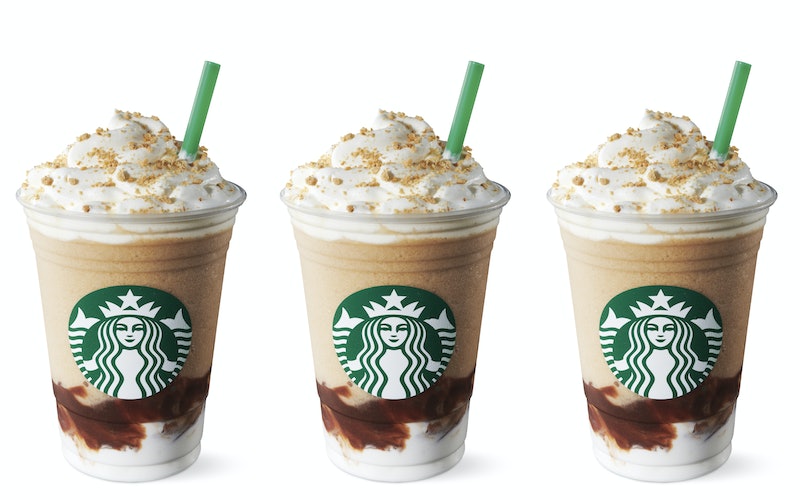 Sometimes, the world listens to your demands — especially if those demands are for sweet, fluffy, graham cracker-y goodness. There's a big return coming, because it's finally been confirmed that the Starbucks S'mores Frappuccino is coming back. For real. It's happening. That's right, after many super fans — or dare I say, superheroes — demanded the return of the favorite, the company decided to make their dreams a reality. S'mores Frappuccinos will be making their triumphant return nationwide and in Canada on Tuesday, April 30. Just like in s'mores seasons past, they'll only be available for a limited time, while supplies last.

If you've never had the Starbucks S'mores Frappuccino before, it's all about the nostalgia. It takes every element of your favorite childhood campfire dessert and makes it into a delicious coffee treat. "Remember the quintessential summer experience of roasting s’mores by a campfire?" the company said in a press release. "The Starbucks S’mores Frappuccino brings back those summertime feels with every sip: the drink starts with fluffy marshmallow-infused whipped cream and milk chocolate sauce along with a creamy blend of Starbucks coffee, milk and ice. It’s finished off with more marshmallow whipped cream and a delicious graham cracker crumble." I would eat that graham cracker crumble with a damn spoon and never ask for anything again in my life. I would mainline it into my veins and never look back.

The demand for this drink has been so high that Starbucks said it might even rival the fan love for the famous Pumpkin Spice Latte — which is, perhaps, the most iconic hot drink of all time. I don't know if I would go as far as to say the s'mores option quite has reached PSL status, but it's definitely true that certain Frappuccino flavors can inspire an almost cult-like following. The Cheesecake Frappuccino that debuted in the UK certainly had that effect on me — and social media basically exploded at the thought of the Pink Flamingo Frappuccino that was announced at select locations earlier this year. But the S'mores Frappuccino seems to have one a special place in fans' hearts. Maybe it's the connection to childhood or the fact that s'mores themselves normally require an open fire, so they're kind of a rare treat. In fact, a drink like this is one of the only ways of getting all of the flavors of s'mores crammed together and ready to take on the go — and there's something about it that just makes people want more.

In fact, if you can't wait to get your hands on some of that sweet, sweet s'mores flavor, you can still get coffee infused with all that goodness. Starbucks Golden S'mores Packaged Coffee is now available at grocery stores.

You can pick it up in K-Cup form or as ground coffee, if you like to brew your own. It might not have quite the same over-the-top amazingness of the S'mores Frappuccino, but it can hold you over until that lands. Until then, we'll all just be counting down the days.

More like this
How To Score A Free Reusable Holiday Cup At Starbucks
By Alexis Morillo
How Long Does Leftover Stuffing Last? Here's When To Toss It
By Chelsey Grasso and Alexis Morillo
TikTok’s Viral Tunacado Sandwich Is The Internet’s Favorite Lunch Right Now
By Alexis Morillo
Pepsi’s Festive Flavour Is Finally Coming To The UK
By Sophie McEvoy
Get Even More From Bustle — Sign Up For The Newsletter