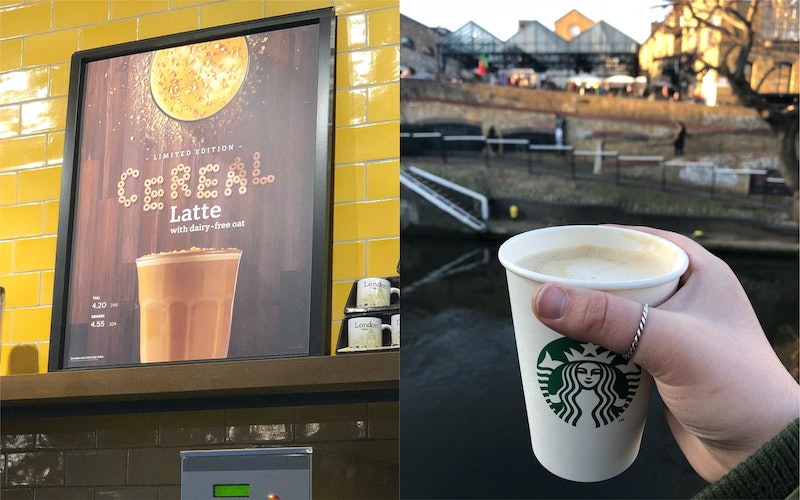 How do you get in touch with your childhood? Maybe you look through old photos and remember embarrassing haircuts and outfits. Maybe you've got some old toys lying around that occasionally come out to play. Well, now you can remember your childhood with your taste buds— and caffeine. If you want your coffee with a big old helping of nostalgia, then Starbucks is ready to deliver — if you're lucky enough to be in the UK, that is. Starbuck UK has introduced a Cereal Latte with oat milk. It's a delicious dairy-free option that's been making waves.

For many, it's great to see dairy-free milk as the default in a specialty drink from a popular chain. Whether you're a vegan, lactose intolerant, or just avoid dairy occasionally, oat milk has been an increasingly popular choice at Starbucks and other coffee shops in the UK. While oat milk is available at Starbucks across Europe, it doesn't seem to be available in America yet. But for the Brits, this drink option takes out the guesswork for those who are dairy-free — and the taste doesn't hurt either.

What makes this latte so cereal-y? "Espresso is mixed with creamy oat drink and cereal powder then finished with a cereal topping," the Starbucks UK website explains. "This comforting latte is evoking nostalgic memories from your childhood." It definitely is. According to one London visitor who was lucky enough to get their hands on it, the latte tastes like honey flakes and is very sweet with toasted undertones. The toasted element seems to be a real draw for coffee and cereal lovers alike. If you like your lattes sweet and your cereal all day long, it may just be the right choice for you.

Unfortunately, the drink isn't currently available stateside — so you may need to hop on a plane to London if you want to try one. Of course, if you're in the US of A you can help yourself to a delicious Cinnamon Shortbread Latté, which "combines espresso with milk and notes of brown butter and vanilla, topped off with cinnamon and nutmeg," according to Starbucks. It looks to be so popular that it's already been dubbed the "CSL". There's also the Cinnamon Dolce Latté, if you can't get enough of that cinnamon deliciousness. Basically, on either side of the pond, there are a lot of sweet and spicy coffee variations to keep you busy — and caffeinated.

Whether you normally like to order off of the "secret menu" or make your own concoctions, sometimes it's nice just to bask in the glory of new options that Starbucks seems to come up with season after season. If your brain is fried and not quite awake because you haven't had your morning coffee yet, being able to point to something without thinking can be a real bonus. The Cereal Latte seems like the perfect sweet treat to warm you up on a bitter UK winter day.

There are new Starbucks inventions coming out all the time, but this Cereal Latte — using a dairy-free milk as a default — is definitely ahead of the curve. Hopefully, it will make it across the pond sooner rather than later, so everyone can indulge in some cereal-based sweetness.