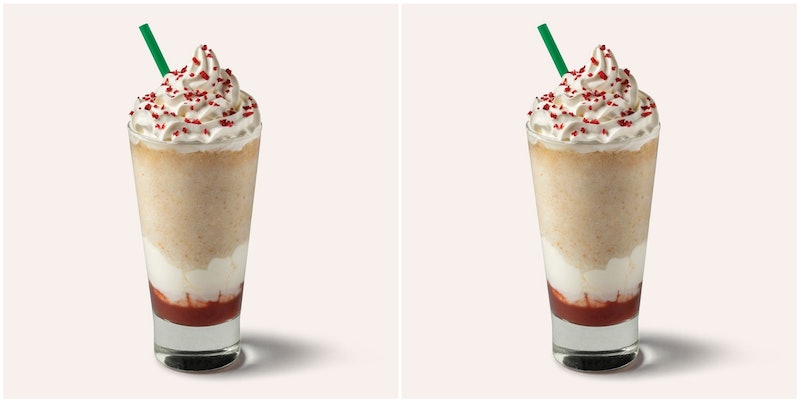 Frappuccinos may not technically be milkshakes — they’re “blended beverages” — but sometimes, it seems like they’re as close as you can get to a milkshake without actually ordering one. What’s more, Starbucks’ latest Frappuccino innovation has done nothing tochange my mind about that belief: You can get a Strawberry Donut Frappuccino at Starbucks in the UK now. Of course, as that very statement might have made clear, there’s a catch, too: You can only get said Strawberry Donut Frappuccino at participating Starbucks locations in the UK — which means those of us who live stateside are out of luck. Again. (Pardon me while I heave a large, disappointed sigh.) Even so, though, between this little tidbit and the announcement that Krispy Kreme delivers now, it seems today is just a big day for donuts and the people who love them, no?

It’s not totally clear exactly when the new Frappuccino debuted, but it seems to have happened sometime in the past week or so; the earliest mentions of it on Twitter date to June 25, 2019. Regardless, though, it’s here now, as evinced by its bold and unmistakable presence right on the homepage of the Starbucks UK website — and, uh, folks? It looks delightful.

A cream-based Frappuccino (what the U.S. menu usually refers to as a “crème” Frappuccino), the Strawberry Donut Frapp is coffee-free; instead, it combines milk and ice with actual “donut crumbles,” blends the concoction up, and piles it on top of a layer of strawberry puree. The finishing touch is a mound of fluffy whipped cream and a sprinkling of freeze-dried strawberries. Here’s what it looks like — feel free to “Oooooh!” and “’Aaaaaah!” over it:

But that’s not all Starbucks UK currently has up its sleeve. A Cookies And Cream Frappuccino debuted at the same time as the Strawberry Donut one — and it, too, sounds perfect for the discerning pastry lovers in the crowd. Like the Strawberry Donut Frapp, the Cookies And Cream one is cream-based, rather than espresso-based, blending together milk, cookies, and ice for what the company calls “a perfect icy creamy cookie texture.” It’s then topped with whipped cream and a “Cookies And Cream topping” which looks somewhat like crumbled up cookies. It isn’t specified which kind of cookie is involved in this Frapp, but it’s safe to say that it’s probably a chocolate sandwich cookie of some sort — think Oreos, Dryox, etc.

In addition to being available in the standard tall, grande, and venti sizes for which Starbucks is known, both of these new Frapps are also available in the rare mini size, which clocks in at 295 ml, or about 10 ounces. (By comparison, a tall is 354 ml or about 12 ounces, a grande is 473 ml or about 16 ounces, and a venti is 709 ml or about 24 ounces.) The Mini Frappuccino originally debuted as a limited edition offering in 2015 and has seen only sporadic outings since then, so its reappearance now for these two new flavors is no doubt a welcome surprise — for those who live in the right place, of course.

Which, of course, brings us to the downside of the whole thing: The Strawberry Donut Frapp, the Cookies And Cream Frapp, and the mini size in both of these flavors are all only available at participating locations in the UK. However, if you get crafty with your ordering, you can get yourself something resembling the Cookies And Cream Frappuccino. According to the fan-run Starbucks Secret Menu website, here’s how: Order a Double Chocolatey Chip Crème Frappuccino in the size of your choice, but ask for to substitute white mocha sauce for the regular mocha sauce typically used to make the drink. Then top it off with whipped cream and you’re good to go! As an alternative, you can also order a Vanilla Bean Crème Frapp, ask for java chips to be blended in with it, and finish it off with whipped cream, mocha syrup, and cookie crumbles. It’s not exactly the official Cookies And Cream Frapp, but the flavor profile should be pretty similar.

If you do happen to be located in the UK, though, and you’re a regular Starbucks-goer, would you mind doing us all a favor? The next time you order a Frapp, make it one of these two new ones and let the rest of us know how it tastes. And do it soon — there's no telling how long they'll be available for, or when they might vanish forever. Don’t forget to take pictures! As the saying goes, pics or it didn’t happen.

Find out more about the Strawberry Donut Frappuccino and Cookies And Cream Frappuccino over at Starbucks UK’s website.