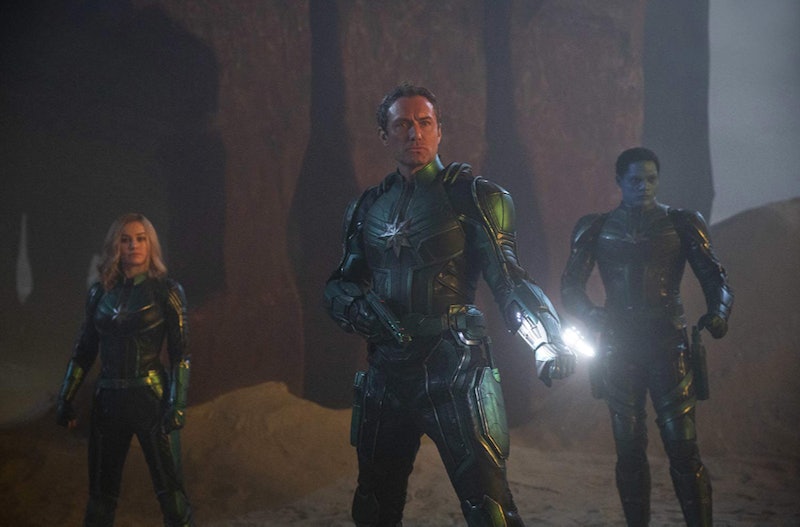 Captain Marvel is out on Mar. 8 and it’s bringing back the Kree, an alien race that has appeared in the MCU in the Guardians of the Galaxy movies, as well as on the series Agents of S.H.I.E.L.D. But what we haven’t seen yet onscreen is Starforce, the Kree military unit. Starforce never made an appearance in the Captain Marvel comics, but showing how the team functions will teach fans so much about the Kree.

The official Marvel site explains that Starforce was created by the Supreme Intelligence, who is the ruler of the Kree Empire. In effort to gain control of the empire, the Supreme Intelligence wanted to have a war against rival empire, Shi’ar. He enlisted the best Kree warriors to join Starforce. This includes Minn-Erva, who appears in Captain Marvel as played by Gemma Chan.

It first appeared in 1992, in Avengers Vol. 1 #346. In the comic, The Avengers make their way to the capital of the Kree Empire, Kree-Lar, in attempt to stop the war between the two empires. Once they’re there, the Supreme Intelligence summons Starforce to fend off the Avengers, believing they’re attempting to help Deathbird assassinate the Kree leaders. But it’s later revealed that the Supreme Intelligence actually orchestrated the war to kickstart the Kree evolution when the Shi’ar set off a bomb that would either kill the Kree or make them evolve.

In the same year, Thor Vol 1 #446 centers around Starforce. In that issue, the Avengers, including Thor, Captain Marvel, Scarlet Witch, and Starfox, face off against Starforce, defeating the military unit. But in Quasar Vol. 1 #35, Starforce disbanded, with an alternative Shi’ar version of the team forming afterwards, and the remaining members being exiled for being traitors, per io9.

Considering that Starforce was short-lived and doesn’t belong to the Captain Marvel comics per se, it’s still unknown what role it will have in the movie. But in interviews, the cast has given clues as to what this version of Starforce will be like.

Chan mentioned during a set visit, per Slash Film, that Minn-Erva and Carol Danvers, a.k.a. Captain Marvel, will have a bit of a rivalry going on. “I suppose before Carol joined the team, Minn-Erva was probably kind of the star of this Starforce team, and she was probably the favorite of the commander who is played by Jude Law,” she said.

Executive producer Jonathan Schwartz shared more about the leader of Starforce, Yon-Rogg, played by Jude Law, with Screen Rant. “He’s kind of the leader of her squad on Hala and teaches her in the ways of being a Kree warrior. And so over the course of their adventure, when she gets captured by the Skrulls and they get separated, he spends a lot of the movie trying to find her and trying to get her back and rescue her from the Skrulls,” he explained. “It’s a tender relationship, but it’s very much mentor-protégé. And I think Carol still has a lot of the elements that made her human in her, which Jude Law’s character both appreciates and is irritated by.”

The movie’s version of Starforce features Captain Marvel. But once the movie comes out, fans will know whether the movie sticks to the comics or comes up with a fresh take on the military unit’s history.